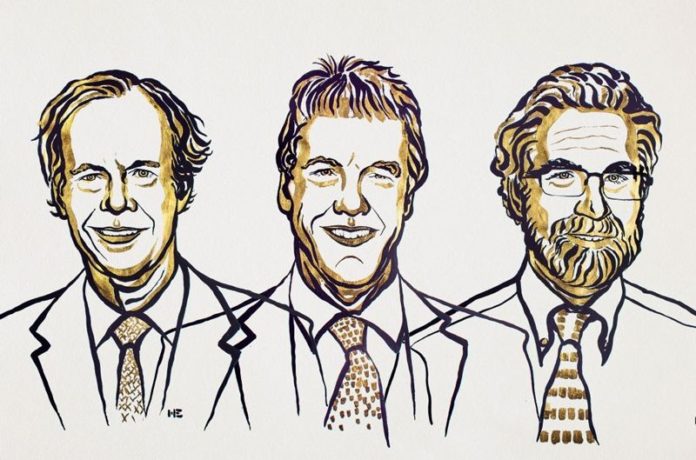 A trio of researchers has won the 2019 Nobel Prize in Physiology or Medicine for describing how cells sense and respond to changing oxygen levels by switching genes on and off — a discovery that has been key in understanding human diseases such as cancer and anaemia.

The three scientists are cancer researcher William Kaelin at the Dana-Farber Cancer Institute in Boston, Massachusetts; physician-scientist Peter Ratcliffe at the University of Oxford, UK, and the Francis Crick Institute in London; and geneticist Gregg Semenza at Johns Hopkins University in Baltimore, Maryland. The team also won the Albert Lasker Basic Medical Research Award in 2016.

Their work has helped researchers to understand how the body adapts to low oxygen levels by, for example, cranking out red blood cells and growing new blood vessels.

“This is a fundamental discovery that they’ve contributed to,” says Celeste Simon, a cancer biologist at the University of Pennsylvania in Philadelphia. “All organisms need oxygen, so it’s really important.”

“The field really coalesced around this discovery, which was dependent on each one of their findings,” says Randall Johnson, a physiologist at the University of Cambridge, UK, and the Karolinska Institute in Stockholm, and a member of the Nobel Assembly. “This really was a three-legged stool.”

The body’s tissues can be deprived of oxygen during exercise or when blood flow is interrupted, such as during a stroke. Cells’ ability to sense oxygen is also crucial for the proper growth of a developing fetus and placenta, and important tumour growth, because the mass of rapidly growing cells can deplete oxygen in the interior of a tumour.

In work conducted in the 1990s, the scientists discovered the molecular processes that cells go through to respond to oxygen levels in the body. They found that central to this is a mechanism involving proteins called HIF and VHL.

Semenza and Ratcliffe studied the regulation of a hormone called erythropoietin (EPO), which is crucial for stimulating the production of red blood cells in response to low levels of oxygen. Semenza and his team identified a pair of genes that encode the two proteins that form a protein complex called hypoxia-inducible factor (HIF), which work together to turn on certain genes and boost erythropoietin production when oxygen is low.

Meanwhile, Kaelin showed that a gene called VHL also seemed to be involved in how cells respond to oxygen, through studying a genetic syndrome called von Hippel-Lindau’s disease; families with the disease carry mutations in VHL and the condition raises the risk of certain cancers.

Ratcliffe and his team later found that the protein expressed by the VHL gene interacts with one of the components of HIF, turning off responses to low-oxygen conditions by marking the HIF component for destruction once oxygen levels rise.

And in 2001, teams led by Kaelin and Ratcliffe both showed that, as part of this process, a chemical modification to the VHL protein, called prolyl hydroxylation, allows cells to respond to oxygen levels incredibly rapidly. When oxygen is present, the modified form of VHL can bind to HIF, which leads to its breakdown. But this modification is blocked when cells are oxygen-starved, kick-starting the activity of HIF.

As a result, cells can react to low oxygen levels by simply blocking the break down of HIF, notes Mark Dewhirst, a cancer biologist at Duke University in Durham, North Carolina. “The cell can respond in minutes.”

The work has led researchers to develop drugs that target oxygen-sensing processes, including for cancer. Drugs that prevent VHL from binding to HIF and causing its degradation, called prolyl hydroxylase inhibitors, are also being investigated as treatments for anaemia and renal failure. Chinese regulators approved the first of these drugs in 2018.

“You could argue that some aspect of this is going to be germaine to all diseases you can think of,” says Simon.

Colleagues hailed the trio as role models to other scientists. “They are extremely humble people,” says Dewhirst. “All three of them hold scientific rigour and reproducibility to the absolute highest standard,” adds Simon.

Kaelin, in particular, has taken his field to task for pursuing possible cancer treatments that aren’t backed up by strong evidence. “The most dangerous result in science is the one you were hoping for, because you declare victory and get lazy,” he told scientists at a 2018 talk at the US National Institutes of Health in Bethesda, Maryland.