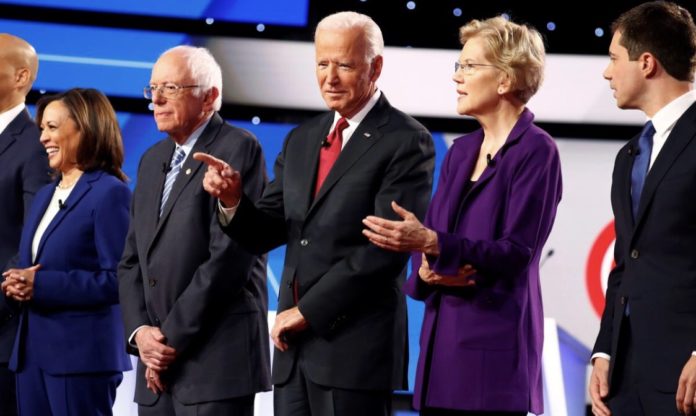 Warren, a U.S. senator who is in a virtual tie with former Vice President Joe Biden in many opinion polls in the Democratic race, argued for her proposal to split up major tech firms such as Facebook Inc, Alphabet Inc and Amazon.com Inc over antitrust concerns, in what was the most wide-ranging discussion of big tech in the Democratic debates to date.

“I’m not willing to give up and let a handful of monopolists dominate our economy and our democracy. It’s time to fight back,” Warren said in the debate in Westerville, Ohio.

But she did not engage with the request by Harris, also a U.S. senator, that she join her in calling for Twitter Inc to suspend Trump’s account. Harris has argued that Trump uses the platform to intimidate his opponents and threaten violence.

“It is a matter of safety and corporate accountability,” Harris pushed, while Warren refused to engage, instead saying she was focused on beating Trump in the November 2020 election.

“I don’t just want to push Donald Trump off Twitter. I want to push him out of the White House. That’s our job,” Warren responded.

Warren, who said on Tuesday she would not accept campaign contributions of more than $200 from executives at large tech companies or big banks, then pivoted to focus on whether candidates were taking money from big tech.

Social media companies, which are under pressure to police their platforms in the run-up to the 2020 election, have most recently been attacked by Democratic candidates, including Warren and Biden, for allowing politicians to run ads with false or misleading claims on their platforms.

This month, leaked audio from an internal Facebook meeting in July disclosed Chief Executive Mark Zuckerberg telling staff they would “go to the mat” to defeat Warren’s expected effort to break up the company if she is elected president.

The other Democrats on stage did not explicitly endorse Warren’s plan to split up the major tech firms but voiced concerns about competition.

U.S. Senator Bernie Sanders, another longtime critic of big tech firms and corporate influence, said the United States needed a president with “the guts to appoint an attorney general who will take on these huge monopolies.”

Former U.S Representative Beto O’Rourke said he would be “unafraid to break up big businesses” but that he did not think it was the president’s role to designate which companies should be broken up.

“Competition doesn’t solve all the problems. It’s not like any of us wants to use the fourth-best navigation app,” Yang said. “There is a reason why no one is using Bing today. Sorry, Microsoft, it’s true,” he added.

Yang also argued that people should receive a share of the economic value generated from their data.

“How many of you remember getting your data check in the mail?” asked Yang. “It got lost. It went to Facebook, Amazon, Google.”