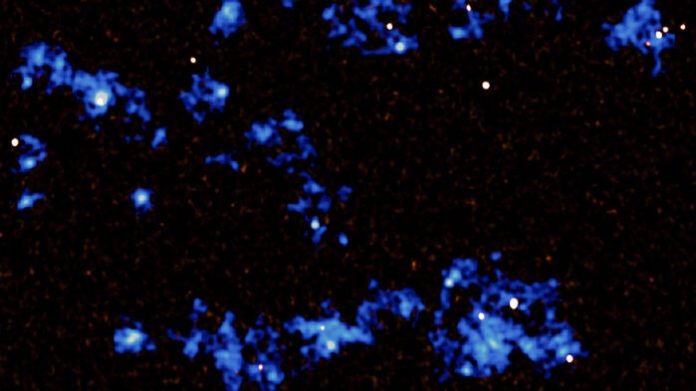 According to the prevailing theory of cosmology, every galaxy lies embedded in a vast network of filaments and sheets of hydrogen gas. But seeing those filaments has remained difficult because they are so wispy and diffuse. Now, an international team of astronomers has spotted two such strands in an ancient cluster of galaxies. The observation bolsters cosmologists’ prevailing theory, which holds that only about 15% of matter is ordinary matter, whereas the rest is mysterious dark matter that interacts only through gravity.

The standard theory says that as the universe evolved, dark matter coalesced to form clumps and strands in a vast “cosmic web.” Ordinary hydrogen gas collected in the clumps to form stars and flowed along the filaments to feed the growing galaxies. Astronomers have seen how the gravity of the web’s filaments distort the images of more distant galaxies, making them align slightly, like fish swimming in a school. Other scientists have detected huge intergalactic clouds of hydrogen by noting how they absorb light from very distant, bright galaxies called quasars. But researchers hadn’t been able to see the streams of gas themselves or tie them to the galaxies they feed.

Now, a team led by Hideki Umehata, an astronomer with the Japanese research agency RIKEN and the University of Tokyo, has peered out into space and back in time to trace two enormous filaments of hydrogen (above) in a cluster of galaxies as it appeared just 2 billion years after the big bang, they report today in Science. That gas was heated by the two dozen galaxies in the cluster and radiated at a particular wavelength. The researchers spied that glow with the European Southern Observatory’s Very Large Telescope on Cerro Paranal in northern Chile, and even correlated the distribution of the gas with the galaxies lighting it up. The observation may be just the first thread in a much longer story, as researchers hope to see such filaments in other, dimmer clusters.