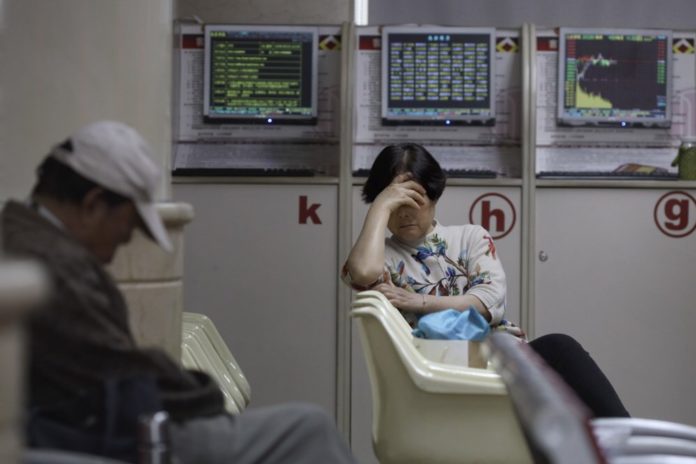 Shares slipped in Asia on Wednesday as tensions between the U.S. and China flared ahead of talks aimed at resolving the trade war between the world’s two biggest economies.

An overnight sell-off on Wall Street added to the gloom. Technology companies, banks and health care stocks bore the brunt of the selling after the U.S. blacklisted a group of Chinese companies, claiming that their technology plays a role in the repression of China’s Muslim minority groups.

China demanded Washington lift the sanctions on Chinese tech companies and warned Wednesday it will “resolutely safeguard” the country’s interests.

The Ministry of Commerce criticized the curbs imposed on sales of U.S. technology to a group of Chinese companies as interference in the country’s affairs.

“The US tactics are undoubtedly a high risk, seeking to pressure the Chinese trade delegation before the main event really gets underway,” Jeffrey Halley of Oanda said in a commentary.

U.S. stocks closed broadly lower, with the Dow Jones Industrial Average giving up more than 300 points in the last hour of regular trading.

Envoys from the U.S. and China are scheduled to meet in Washington on Thursday for another round of trade talks. The bouts of added conflict are denting hopes that Washington and Beijing will find a resolution to their long-running and painful tariffs war.

“The rhetoric on both sides, whether it’s the U.S. putting certain Chinese technology companies on a blacklist, or China vowing to retaliate with a ‘stay tuned’, it just keeps upping the temperature in the room and creating greater uncertainty for businesses, for consumers and for investors,” said Sameer Samana, senior global market strategist at Wells Fargo Investment Institute.

The yield on the 10-year Treasury fell to 1.53% from 1.55% late Monday, a signal that investors are favoring lower-risk investments amid the trade war turmoil. Utilities and real estate companies, both safe-play sectors, held up better than the rest of the market, though they also ended the day in the red.

The latest escalation in U.S.-China tensions adds yet another worry for investors already anxious over a bevy of political and economic concerns. Last week, the S&amp;P 500 posted its first back-to-back losses of 1% this year as surprisingly weak numbers in surveys of manufacturing and service industries showed the U.S.-China trade war is threatening U.S. economic growth.

Benchmark crude oil dropped 22 cents to $52.41 per barrel in electronic trading on the New York Mercantile Exchange. It fell 12 cents to settle at $52.63 a barrel on Wednesday. Brent crude oil, the international standard, slid 24 cents to $58.00 a barrel.

While the price of U.S. crude is up just under 9% so far this year, it remains off by more than 27% from a year ago. That slide in prices over the past 12 months has weighed on energy stocks this year.