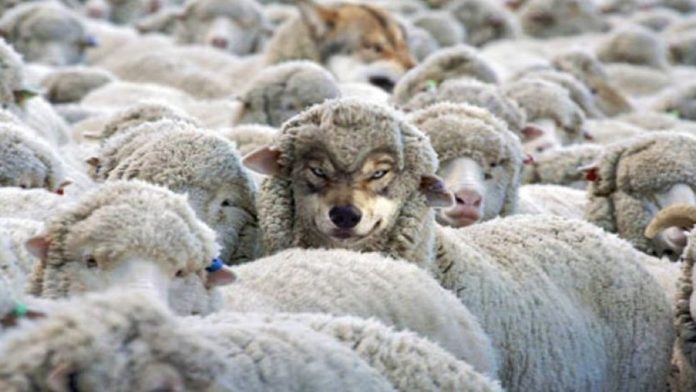 Work in any competitive field long enough, and you’re bound to run into a wolf in sheep’s clothing. It’s a powerful image. A shepherd watches over his flock to protect them from harm. He’d chase away any predator that tried to make its way into the flock. A clever wolf wearing the skin of a sheep as a disguise can sneak by the vigilant shepherd and get into the herd undetected.

The story isn’t just a colorful description–it’s a warning to all of us to beware the wolf in sheep’s clothing. They may seem innocent, but they have ulterior motives. They’ll use different tactics to camouflage their intentions.

The person who is kind to you, but undercuts you when you aren’t around is a wolf in disguise. A wolf in sheep’s clothing might pick your brain for ideas and then pass them off as their own to get a promotion. They’re always looking out for themselves at the expense of everyone around them.

Wearing a Disguise Has Its Advantages

People don’t go out of their way to manipulate others unless they’re getting something out of it. Hiding their intentions gives wolves the chance to manipulate other people to advance their own agenda. They know that what they’re trying to do wouldn’t be popular, or it might cause struggle if they presented themselves honestly.

They’ll be able to do what they want with less interference if they put on an act. By the time people figure out their true motives, the wolf has what it wants.

Signs That Someone Is a Wolf in Disguise

How to Spot a Wolf

Know What’s Real So You Can Spot the Phony

Do some homework so that you have as much of the story as possible before you work with them. Research how they respond in certain situations, or give them hypothetical problems to see how they respond.

A job applicant might tell you that she’s always positive and thinks of herself as a team-player. That’s what every employer wants to hear. During the interview you ask applicants to work in groups to solve a problem to see how they handle the situation. The applicant “positive team-player” is bossy and negative. You’ve spotted the wolf.

A wolf will tell you something that ultimately benefits them. Gather evidence that proves or disproves their position, and see what happens. Chances are, when you choose the side that supports their agenda, they’ll act like your best friend. If you disagree, they’ll become aggressive.

Spotting a potential wolf–especially if you are one of the sheep–can present you with some challenges. If your gut tells you that a wolf is lurking among all the other sheep, pay attention, and make sure you take the next step.

Ask Questions, the More the Better

There’s nothing wrong with asking questions to uncover the truth. The safety of everyone in your group is at risk. Since wolves often make up stories, you may be able to call them out when their tales lack details.

When they state an opinion, ask “Why do you think that?” or “How do you know it’s like that?” They’ll have trouble coming up with enough information to pull off the lie.

Since wolves are always pretending to be something they aren’t, they don’t usually have a clearly thought-out reason for what they say. In a debate, they won’t understand the root of an issue.

They may also tell you what they think you want to hear, but when pressed for more information, they won’t have anything to add. Their knowledge is superficial. No matter how much you try to encourage discussion, they will not be able to carry on a conversation about the subject.

As much as we want to believe that everyone has the best intentions, it isn’t always the case. Some people only do things to benefit themselves, and they don’t care who they hurt in the process.

Wolves in sheep’s clothing can be found in almost every setting. You can’t get rid of them, but if you can spot them, you can avoid falling into their traps.