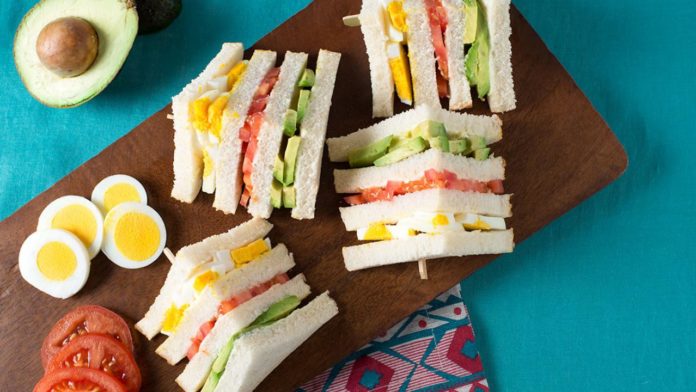 Travel can be daunting sometimes, but here’s a tip: comfort can often be found in a sandwich. Packing ingredients between two (or more) slices of bread is a universal art that ties people together the world over. Sandwiches give us a real insight into a destination’s cuisine, often representing the key flavours of a country.

Sometimes borne out of poverty, sandwiches can be some of the best dishes a country has to offer, even in the current day. They’re honest, substantial, reliable and affordable. In honour of the humble sandwich, we explore some of the world’s most notable creations.

Greece’s souvlaki and Turkey’s kebabs are well known, but the Lebanese shawarma deserves a little more attention. Two thin pita breads form the basis of the cylindrical sandwich, filled with the meat of the customer’s choice – lamb, or chicken. A combination of two meats is often available, too. The meats are marinated in Middle Eastern spices such as clove, cardamom, cinnamon and sumac (a zesty, lemon-flavoured spice) before being stacked on a vertical rotisserie, and left to cook until (hopefully) succulent.

Shavings of meat are placed onto the pita, complemented by staples such as tabbouleh, pickled turnips, cabbage, lettuce, tomato and onion. Then come the condiments, often hummus, sometimes toum (Lebanese garlic sauce), tahini and chilli sauce. It’s all wrapped up and served as is, or toasted to crisp up the bread.

In Portugal’s second city, Porto, it’s impossible not to discover the francesinha – an overly-indulgent sandwich guaranteed to scare the health conscious. The famed sandwich is a layered affair, with pork meat, sausage, bacon, and a patty or steak cradled in two slices of thick white bread. Sometimes there’s a third slice of bread in the middle, just to plump things up a little more. A slice of cheese then crowns the sandwich.

It’s not over: the francesinha is often topped with a fried egg, causing the cheese to melt and fall over the sandwich’s edges. To finish the elaborate meal off, everything is drenched in a slightly acidic red sauce, combining beer and tomato. Some people add port to the sauce too for some extra kick, and to respect the home of port in which the sandwich was born.

This hearty sandwich takes some beating. Bake and Shark’s star? Yes, it’s a meaty piece of shark. In Trinidad, it’s commonly found at cafes and food shacks by the beach. The fillet of shark meat is marinated in green seasoning (a traditional Caribbean marinade made with shado beni, or coriander as a substitute), lime, salt and pepper. If it’s done right, the fish is left to marinate for about six hours.

The fillet is then crumbed and either pan or deep fried, and accompanied by a very wide variety of fillings – coleslaw, pineapple, tomato, pepper sauce, garlic sauce and tamarind sauce are a few – all held in a soft piece of flatbread.

The cemita was born in Mexico’s Puebla region. Substantial and balanced, it is a true crowd-pleaser. The sandwich’s foundation is either one type of meat, or a medley – veal, pork and/or chicken are common options. Oaxaca cheese shredded hair-thin is added, bringing a stringy surprise to the sandwich. Chilli sauce and papalo sauce (made from a native green herb similar to coriander) come next, as do jalapenos for those who want to turn up the heat. Chunks of avocado tame the spice with the help of a buttery bread roll likened to brioche that holds everything together.

In the speedy stand-up cafes peppered around Italy, gas station diners, train station cafes and even on the streets, tramezzini are always ready to feed the people. The charming, triangular, crustless sandwiches come in all sizes: they’re often small, but mutant-sized ones are also available. A section of the sandwich reveals beautifully coloured layers, thanks to fillings such as prawns, prosciutto, egg salad, tomato, peppers and mozzarella. One thing is a constant – there is plenty of mayonnaise.

You may be able to guess what’s involved in a tripleta from its name – three types of meat. And we’re not talking about thin, measly slices of meat; the trio involves cube steak (bistec) marinated in lemon and garlic, asado-cooked pork, and smoky ham. Other essentials for the popular sandwich are Swiss cheese, lettuce, tomato, crunchy potato sticks, onion, ketchup and mayonnaise. It can be a mission eating a tripleta solo and you may need to call some back up to help you power through.

Northwest China is home to some of the country’s most exciting food, influenced by the common flavours of the ‘Stans and the Middle East. Xi’an, the capital of Shaanxi province, is a great place to find food with a punch – including this much celebrated spicy sandwich, whose hero is shredded lamb marinated with the classic combination of chilli and cumin. Onion, whether white or green, livens the mixture, and sometimes peppers are added, too. The lamb is served in bread that either fully encases the meat, or a flatbread that is cut down the middle so the lamb peeks out, tempting passersby to have a snack.

Popular in Israel and the lesser known cousin of the falafel, sabich is a vegetarian’s dream, maybe even delicious enough to convert carnivorous sceptics. Pita bread is topped with crispy pieces of fried eggplant, pickles are added for sourness, eggs for protein and Israeli salad – finely chopped tomato, cucumber and parsley – for good measure. We can’t forget about the sauces: hummus, tahini and amba, a pickled mango sauce that drives people wild. It’s a messy exercise eating sabich, so we suggest you have napkins at the ready. Heck, you may even need a bib.

The Dutch have invented what is perhaps the world’s most creative sandwich. The broodje kroket is a sandwich of ultimate resourcefulness, with the kroket (croquette) as the centrepiece. Making one involves finding whatever leftovers are in the fridge (it could be meat, vegetables or potatoes), rolling the items into a log shape and covering it in breadcrumbs before it’s deep fried. The creation is placed into a bread roll, and spicy brown mustard is squeezed on top to finish. Travellers will find broodje kroket at snack bars and cafes.

Picture a chip butty and supersize it; that’s what a mitraillette is likened to. Translating as ‘submachine gun’, it’s fully-loaded with fillings. A buttered baguette is packed with a hamburger patty or meatballs, plenty of fried potato chips and sometimes salad items such as tomato, carrot and lettuce – not that they do much to combat the heftiness of the sandwich. Cheese and mayonnaise commonly smother the fillings to finish, but not all mitraillettes are built the same. Some feature the likes of bearnaise sauce or curry ketchup. At some diners, you can construct your own mitraillette. Locals commonly enjoy the signature sandwich with a cold Flemish beer.