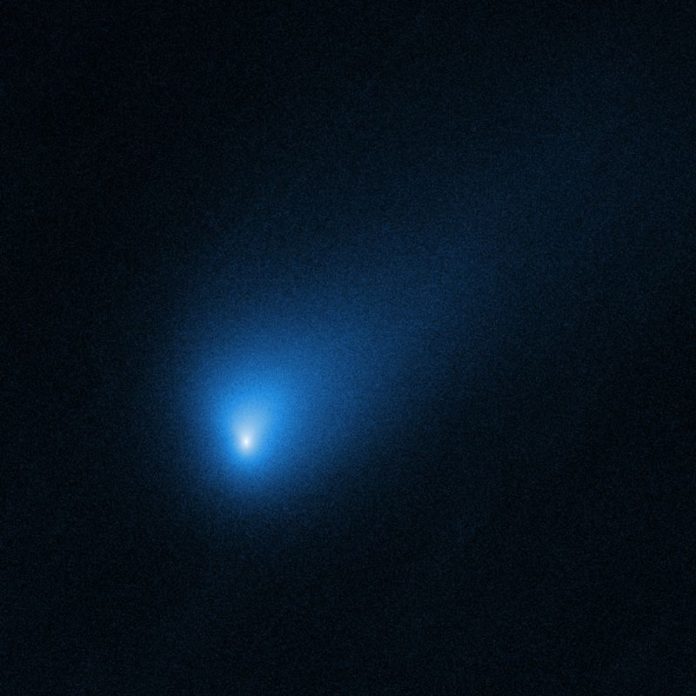 Astronomers have spotted signs of water spraying off comet 2I/Borisov, which is flying towards the Sun on a journey from interstellar space. It is the first time scientists have seen water in our Solar System that originated somewhere else.

“There’s water — that’s cool, that’s great,” says Olivier Hainaut, an astronomer at the European Southern Observatory in Garching, Germany. The discovery isn’t surprising, he says, because most comets contain a lot of water. But confirming its presence in an interstellar comet is an important step towards understanding how water might travel between the stars.

A team led by Adam McKay, an astronomer at NASA’s Goddard Space Flight Center in Greenbelt, Maryland, reported the discovery on 28 October on the arXiv preprint server1.

Astronomers have been avidly tracking Borisov ever since its discovery on 30 August, because the comet’s trajectory shows that it comes from deep space — not from the outer Solar System as most comets do. Borisov formed around a distant, unknown star. Billions of years ago something must have kicked it out of orbit and sent it careening here. It is only the second interstellar object ever discovered, after 2017’s ‘Oumuamua.

McKay and his colleagues used a 3.5-metre telescope at Apache Point Observatory in Sunspot, New Mexico, to probe the sunlight reflecting off Borisov. On 11 October they spotted a telltale signature of oxygen in the spectra of light coming from the comet. Although comets can produce oxygen in a couple of different ways, researchers say that the most likely explanation is water breaking apart into hydrogen and oxygen.

The scientists compared the amount of water in the comet to the amount of cyanide it contains, which other researchers had previously spotted2. The ratio of water to cyanide is consistent with that seen in comets from the Solar System. That reinforces scientists’ growing idea that Borisov is not all that different from most comets, despite coming from a different star system. “All signs so far are pointing to it not being unusual,” says Matthew Knight, an astronomer at the University of Maryland in College Park.

Borisov will fly past the Sun in early December. As it gets closer, the Sun’s heat is warming the comet and causing its icy nucleus to spray out gas and dust. Astronomers expect to see more signs of water and other molecules coming off of it in the coming weeks.

“The field is changing almost on a daily basis,” says Hainaut. “It’s science in real time.”