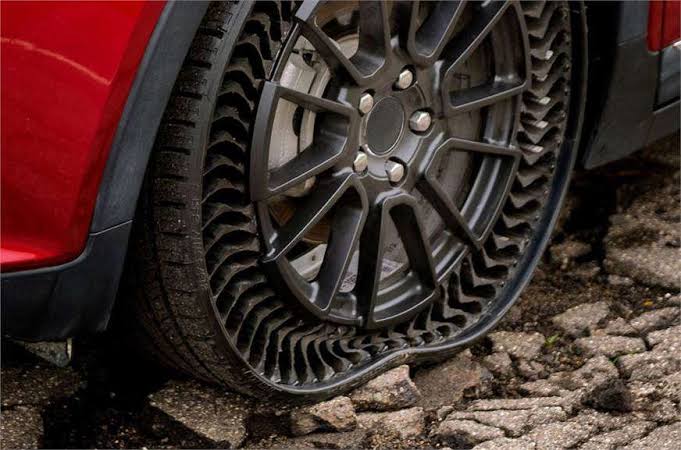 Makers of airless tires such as Japan’s Bridgestone Corp. hope driverless cars will herald a breakthrough for their niche technology, which is more than a decade old but underperforms standard tires in every way except resistance to puncture.

Autonomous driving – and the eventual introduction of self-driving taxis – could mean greater demand for puncture-resistant tires as greater usage of vehicles exposes them to more flat tires.

“In the past, a car would be driven about 20% of the time and spend the other 80% in the garage,” Atsushi Ueshima of Bridgestone said at the biennial Tokyo Motor Show on Thursday.

“In the age of shared, autonomous vehicles, it will be the opposite, and preventing breakdowns will be a top priority.”

France’s Michelin pioneered the technology, showcasing the first prototype in 2005 on a wheelchair. The commercial launch came in 2012, but uses have so far been mostly limited to ride-on lawnmowers and golf carts, along with construction machinery, where the chance of a puncture is high.

Toyota Group truckmaker Hino Motors Ltd used the motor show to display a vision of the future where electric, modular, people-to-parcel movers run on airless tires of its own design. Toyota Motor Corp showed a hydrogen-powered concept car fitted with Sumitomo Rubber Industries prototypes at the previous event in 2017.

Michelin and General Motors Co have announced a joint research agreement aiming to have airless tires on passenger cars by as early as 2024. Testing starts this year on the Bolt electric vehicle in Michigan.

For electrified vehicles (EV) in particular, the tires’ design – a band of rubber encircling polymer spokes around an aluminum hub – allows for motors to be fitted directly inside the wheel, opening up space in the chassis to extend leg room or expand the trunk.

EV manufacturers also hope that airless tires will in the future weigh less than their standard cousins, allowing crucial extra kilometers of driving range given consumer concerns about running out of power far from the nearest charging station.

So far though, making them more lightweight has proved difficult. Sumitomo Rubber says it has been able to reduce weight slightly by changing the shape of the polymer spokes, but the heft of the rubber tread still makes it a little heavier than current conventional tires.

Structurally, too, there are challenges. Sumitomo Rubber has been able to increase the size of its prototypes somewhat since the last motor show, but it is still far from making them big enough and strong enough for a bus or truck.

“There will definitely be demand for airless tires for commercial vehicles in the future, but making something than can support that weight is a really huge obstacle,” Hiroshi Ohigashi, of Sumitomo Rubber, said at the motor show.

Manufacturing costs are also a little higher than for pneumatic tires, but both Sumitomo Rubber and Bridgestone expect an eventual move to mass production would solve that.