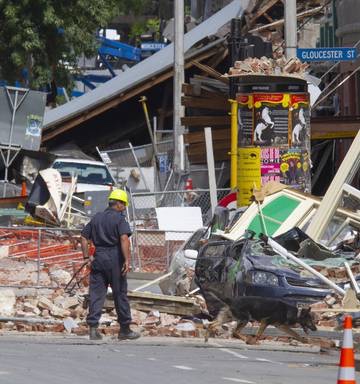 After a large quake, could we accurately predict whether an even bigger one is on its way?

That’s something Swiss researchers have explored in a new study, in which they were able to use a method to make predictions with near 100 per cent accuracy.

However, New Zealand scientists say their findings, reported today in international journal Nature, need to be treated with some caution.

In the paper, led by Dr Laura Gulia and Professor Stefan Wiemer of Swiss university ETH Zurich suggest how a simple “traffic light” classification system could be used to indicate the probability of a subsequent larger event after quake.

In most aftershock sequences after a quake of magnitude 6 or more, the b value increased, meaning that small earthquakes became more common relative to larger events.

However, the researchers identified that, in the Italian and Japanese earthquakes, the b value actually decreased after the initial quake – and in both cases, an earthquake of larger magnitude followed, revealing that the first was a foreshock.

They suggested that the b value could even act as an indicator that a larger earthquake would follow the initial earthquake.

The system they proposed would classify the threat of aftershocks in real time, based on the changes in the b value.

They applied this system to 58 historical earthquake sequences that were greater than 6 in magnitude, and were able to predict whether a specific event was an aftershock or the main quake with an accuracy of 95 per cent.

In New Zealand – where there are 15,000 quakes large enough to be recorded every year, including up to 150 big enough to be felt by people – GNS Science uses a statistics-based measure to calculate its aftershock forecasts.

A GNS Science spokesperson told the Herald the new study was interesting, but more work needed to be done because it was based on a limited number of earthquakes.

“In studies such as this, there is a possibility that the chosen time periods, regions and magnitude thresholds could bias the findings,” the spokesperson said.

“Also, a confounding factor is that small aftershocks cannot be reliably detected in the first few hours following a large event. The claim of 95 per cent success in retrospectively distinguishing foreshock sequences from aftershocks should be regarded with caution until more rigorous tests have been conducted.”

Victoria University professor of geophysics John Townend said, because the method had to be customised to each earthquake event, it couldn’t yet be used as a catch-all approach.

He also believed the hypothesis needed to be tested on quakes of lower magnitudes.

“And while it might be a useful mechanism, it doesn’t mean you’d be out of the woods in terms of aftershock sequences,” he said, adding that the devastating 2011 Christchurch earthquake was actually a smaller aftershock of the September 2010 7.1 quake, which happened to strike in a deadly location.