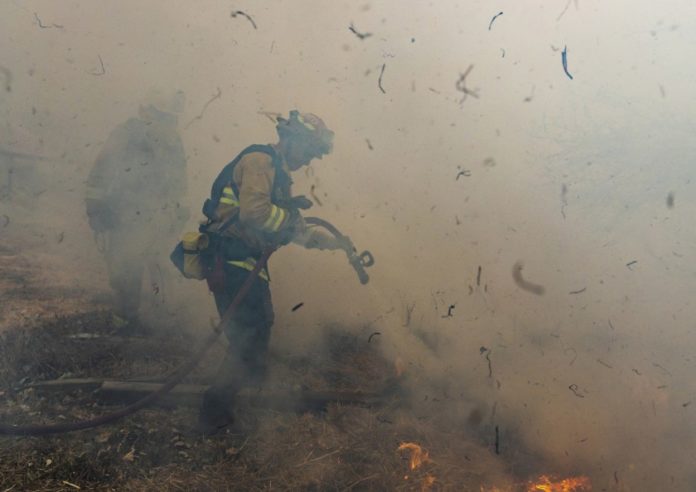 SANTA ROSA, Calif. —  Even as howling winds calmed Monday, allowing firefighters to chip away at a massive fire in Sonoma County wine country, residents who fled their homes braced for more fear and uncertainty, while millions of others faced prolonged power outages.

The respite from the Diablo winds is expected to be temporary. Meteorologists warned of low humidity and gusts as high as 65 mph Tuesday through Wednesday morning that could push the more than 75,000-acre Kincade fire into new terrain.

By Monday evening, its sixth day, the fire was about 15% contained and had destroyed 123 structures, including 57 homes, with nearly 200,000 households under evacuation orders. Down south, firefighters in Los Angeles struggled to control a fire near the Getty Center in the affluent western part of the city.

Pacific Gas & Electric, the embattled utility company that has cut off power to more than 2 million people in an unprecedented effort to prevent wildfires from sparking, drew more criticism Monday, disclosing that it had failed to notify about 23,000 customers of the precautionary power shutdowns and that its equipment had malfunctioned near two fires in Contra Costa County over the weekend.

In Santa Rosa early Sunday night, people gathered their belongings and escaped from the Kincade fire with only flashlights andcellphones to light the way, caught between the power outage and the fire it was designed to prevent.

The cause of the fire remains under investigation. No deaths have been reported. A firefighter suffered a minor burn and was taken to a hospital, officials said Monday. Another who was burned more seriously was airlifted to UC Davis Medical Center in Sacramento.

At a news conference Monday, Gov. Gavin Newsom said firefighters were “holding their own,” particularly around Healdsburg and Windsor, and have kept the flames confined to the east side of the 101 Freeway without any major flare-ups to the west.

But, he added, California is just entering the peak of its fire season, with the winds the biggest wild card.

Thom Porter, chief of the California Department of Forestry and Fire Protection, said his firefighters were working to lift some evacuation orders as soon as possible and carve safe paths for PG&E workers to restore power. But only a thorough drenching can save California from more heartache and destruction, he said.

“We’re nowhere near done with this,” Porter said. “We need widespread, statewide rain before this is over.”

On Monday, firefighters made a stand near the town of Windsor in the Shiloh Ridge area, where an unknown number of homes had burned.

Through a thick blanket of smoke, they hacked at brush on hilly terrain to create a perimeter that would serve as a line of defense for homes and vineyards when the winds kicked back up Tuesday.

After gusts as strong as 96 mph Sunday morning, the lighter winds allowed for a more aggressive attack against the fire, especially by air, said Ben Nichols, a Cal Fire division chief.

“We’ve been chasing this fire for the last four days,” Nichols said. “We finally got the break in the weather.”

Gil Laroucherie had sought refuge at the Sonoma County Fairgrounds with his 53 horses. But the fate of his Windsor ranch ate away at him.

In the pre-dawn darkness, he drove back toward the flames. His place was unharmed, but the sight of the deserted town threatened by fire was sobering.

“I knew pretty well what I was going to see, but the realism of seeing it, it takes you back a bit,” said Laroucherie, 78.

Mike Birleffi ignored the evacuation order, an act of defiance he attributed to stubbornness and a perhaps misguided belief that he could single-handedly ward off the flames.

The 63-year-old carpenter has lived on a 3-acre property in Windsor for 33 years.

During the Tubbs fire two years ago, he made a sign that said “Thank you first responders” in red paint. Now, he had a reason to display it again.

Sunday night, he snuck a few hours of sleep. But mainly, he stood in his driveway and stared north, watching the flames crest on the hill above Shiloh Road.

“It looked kind of like some kind of biblical prophecy,” he said, adding that he didn’t believe in prophecies.

In the Coffey Park neighborhood of Santa Rosa, which was burned to the ground in the Tubbs fire, people who had spent the last two years rebuilding their homes received evacuation orders early Sunday morning.

Debbie and Rick Serdin were not ready to leave their new beige two-story house with a handwritten sign attached to a sapling tree: “We will be back better! Stronger!”

Just weeks earlier, they had marked the two-year anniversary of the Tubbs fire by celebrating the rebirth of their neighborhood with others who had undertaken the long, hard slog of rebuilding.

Overnight, Rick Serdin sprayed water on his new house and his neighbors’ houses, keeping watch as smoke filled the streets.

The Serdins would make one last stand.

“If we lost it again, we weren’t coming back,” Debbie Serdin said. “Everyone knows Coffey Park couldn’t handle it again.”

In the wine country near Jimtown, nearly 25 miles to the north, the fire had already passed through. The damage seemed almost random along Highway 28, with the flames having raced down the tree-covered hills unevenly, leaving splotches of blackened brush.

The wind kicks up flammable material in random patterns, said Rhett Pratt, a Cal Fire spokesman — leaving people to marvel at why one structure was spared and another reduced to ashes.

“This type of fire is really difficult because it doesn’t completely burn everything,” Pratt said. “It kind of hopscotches. It picks and chooses.”

The historic Soda Rock Winery was a twisted heap of metal. All that remained was its distinctive stone facade, now blackened, and a 20-foot steel sculpture of a boar named Lord Snort.

Just down the road, another local landmark, the Jimtown Store, was unscathed.

The danger was not over, Pratt said. Smoldering debris could pose a big threat when the winds return.