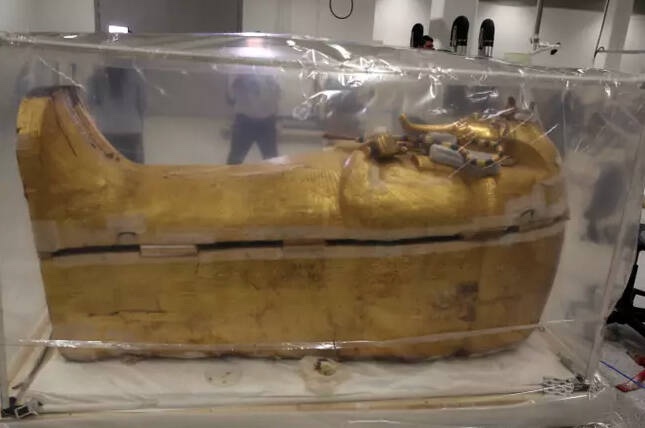 The outermost coffin holding the body of King Tutankhamun had never left the 3,300-year-old tomb from the time his body was first laid to rest there. Even after British archaeologist Howard Carter discovered the tomb in 1922, the outer coffin made from wood and gold stayed in the Valley of Kings — until now.

Earlier this year, the Getty Conservation Institute and the Egyptian Ministry of Antiquities finished a nearly 10-year-long restoration of Tut’s tomb. Now, wrote The Los Angeles Times, they’ll restore his golden coffin, removing it from its resting place and allowing experts to finally get a good look.

The intricate project is largely motivated by the impending opening of the Grand Egyptian Museum in late 2020, which will overlook the Pyramids of Giza. In addition to the three coffins (one inside the other) that house Tut’s body, the exhibit will showcase the numerous relics discovered in his tomb. The innermost coffin is made of solid gold, while the middle coffin is built from gilded wood and multi-colored glass.A CBS This Morning segment on the restoration of King Tutankhamun’s tomb.

Carter’s discovery of Tut’s resting place in the Valley of the Kings was the first time that a royal tomb from the time of ancient Egypt had been discovered so remarkably intact. It contained a plethora of stunning royal treasures as well, such as a dagger made from meteorite.

After the discovery, two of the three coffins were subsequently transported to the Egyptian Museum in Cairo while the outer coffin was left in the king’s tomb. Only in July, 97 years later, was the casket removed under intense security in order for it to be fumigated for an entire week.

With careful yet thorough restoration now underway, experts have had the rare opportunity to inspect the outer coffin up close and reveal photos for all to see.

Given the damage to the coffin that experts have now seen, however, Antiquities Minister Khaled el-Enany said it would take a minimum of eight months to restore it. General director of First Aid Conservation and Transportation of Artifacts Eissa Zeidan said the coffin is about “30 percent damaged” due to the heat and humidity inside the tomb.

“The coffin is in a very bad condition, very deteriorated,” said Zeidan. “We found many cracks, we found many missing parts, missing layers.”

el-Enany confirmed as much when he said the coffin was in a “very fragile state,” with repair work on its cracks being the foremost priority. The 7-foot, 3-inch-long coffin has been safely kept in one of the 17 laboratories within the new museum.

Restorers have been working on numerous items found in King Tut’s tomb, of which there are more than 5,000 — all of which will be showcased at the Grand Egyptian Museum. With more than 75,000 square feet of real estate, it’ll be the biggest museum on Earth exclusively dedicated to one civilization.

A woman looks at the golden sarcophagus belonging to Tut, who died at the age of 19.

Restoration of King Tut’s tomb came after years of tourists trudging through the majestic World Heritage site. Both the Getty Conservation Institute and Egypt’s Ministry of Antiquities committed to the extensive revamp nearly a decade ago and finally finished in February.

Their efforts included installing an air filtration system to regulate the humidity, carbon dioxide, and dust levels inside. Lighting, as well as a new platform from which tourists can see the sarcophagus, were added too.

The linen-wrapped mummy of King Tutankhamun, displayed in his climate-controlled glass case in the underground tomb KV62.

Of greatest concern were the strange brown spots on the tomb’s paintings, which suggested microbial growth in the room. These were found to have been mere discolorations due to fungus that had been there since the tomb’s discovery.

Thankfully, neither fungus nor anything else has taken down Tut’s tomb. Now, after a long period of restoration, it will live on for many more visitors to see. And after the most recent restoration of the outermost coffin, visitors will have the most complete picture yet of how the boy king was buried.

When work on the pharaoh’s gilded coffin concludes and the Grand Egyptian officially opens, it will be the first time in history that King Tut’s three coffins will be on display together.