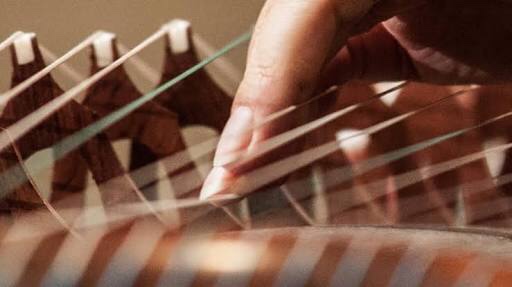 There are several other pentatonic scales, and many of these originated in the traditional music of Asian countries such as Japan, China and Indonesia.

Exotic (non-western) scales can be a rich source of inspiration for composing and improvisation.  They provide a mystical and distinctive sound, which can often work well with music otherwise based on western harmonic structures.

Japanese scales are a good example.  While the intervals in these scales are unusual compared to the Major scale, they are also very accessible to the western ear.

The first is the In Sen scale.  This may already sound strangely familiar to you, because it is often used as the tuning for wind chimes.

Japanese scales have great significance within Japanese traditional culture.  The five notes of the pentatonic scales are given male and female characteristics, and represent the five basic elements of earth, water, fire, wood and metal.

Unlike western music theory, the root note of Japanese scales is considered to be not the first, but the central third note, which better suits their concept of balance.  For the sake of comparison though, we are showing these scales as if they start from the first note.

Another important Japanese scale is the Hirajoshi scale, which is also pentatonic.

The Hirajoshi scale differs from the In Sen scale by only one note, as the b7 degree becomes a b6 degree instead.

This scale is the basis for many Japanese traditional tunes, including the folk tune Sakura, meaning ‘cherry blossom’.