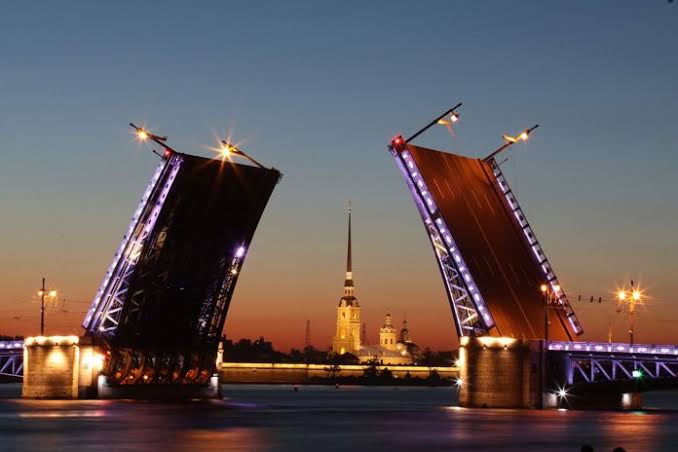 The land of Vladimir Putin and snowy mountains – Russia certainly feels like it is on one edge of the world and yet, it has dominated the Earth, with its vast terrain and mystical politics. However, even though you may get eerie feels when you think about it, Russia is still a very beautiful and grand travel destination. If you don’t believe me, then go see for yourself.

Moscow is not only the capital of Russia but also the most densely populated city in the region. This city is a centre of politics and scientific research not only for Russia but the entire Eastern Europe. In its historic core is the Kremlin, a complex that’s home to the president and tsarist treasures in the Armoury. Outside its walls is Red Square, Russia’s symbolic center. It’s home to Lenin’s Mausoleum, the State Historical Museum’s comprehensive collection and St. Basil’s Cathedral, known for its colorful, onion-shaped domes. The Garden Ring district has bars, nightclubs and museums like the Pushkin State Museum, with many Impressionist works, and the State Tretyakov Gallery, specializing in Russian art. Nearby are the Bolshoi Theatre, known for ballet and opera, and Tretyakovsky Proyezd, a street lined with luxury shops. To the north, the Ostankino TV Tower offers panoramic views. Wintertime brings ice-skating to Gorky Park, plus the Russian Winter Festival, featuring music and dance. South of the city center is the open-air architecture museum Kolomenskoye, showcasing a wide range of building types.

Have you ever seen a place that reminds you to a fairytale? Well if not, then St Petersburg is the place for you to go to right now! St. Petersburg is a Russian port city on the Baltic Sea. It was the imperial capital for 2 centuries, having been founded in 1703 by Peter the Great, subject of the city’s iconic “Bronze Horseman” statue. It remains Russia’s cultural center, with venues such as the Mariinsky Theatre hosting opera and ballet, and the State Russian Museum showcasing Russian art, from Orthodox icon paintings to Kandinsky works.The Hermitage Museum has a vast, world-famous collection of antiquities and paintings, many displayed in the gilt-trimmed baroque Winter Palace on Palace Square. Iconic churches include the Savior on Spilled Blood, a Russian Orthodox cathedral with ornate onion domes. Nevsky Prospekt is a shopping and dining strip, and its intersection with Dumskaya forms the main nightlife district. Popular activities are skating and skiing in city parks or boating urban canals and the Neva River. White Nights is a massive citywide summer festival.

Pskov is a city in west Russia, near Estonia. It’s known for the Pskov Krom, a citadel whose fortress and Holy Trinity Cathedral date from medieval times. Close by, the Art Museum-Reserve has a collection of religious icons and other works. The Museum-Reserve complex’s Pogankiny Chamber is a 17th-century merchant’s house. Mirozhsky Monastery, south across the Velikaya River, is home to Byzantine frescoes.

Vladivostok is a major Pacific port city in Russia overlooking Golden Horn Bay, near the borders with China and North Korea. It’s known as a terminus of the Trans-Siberian Railway, which links the city to Moscow in a 7-day journey. In the city center is Central Square, where a towering memorial pays tribute to local soldiers who fought Japanese forces in the early 20th century.Nearby, the Arsenyev Primorye Museum displays local cultural artifacts. Facing Golden Horn Bay, which is spanned by the modern-looking Zolotoy Bridge, is Korabelnaya embankment, a popular waterfront promenade lined with landmarks like a WWII-era submarine. Russky Island Bridge, a long cable-stayed span across the Eastern Bosphorus strait, leads to Russky Island, one of the city’s few outlying islands. Vladivostok Fortress, a hillside stronghold, shows off artillery and military vehicles. A funicular climbs up steep Eagle’s Nest Hill for sweeping city views, while Sportivnaya Harbor, on Amursky Gulf, draws swimmers.

Aside from these, Russia also has a lot of other places to offer but if you’re short on your time in Russia then visiting the above places will give you the perfect scoop.

Located between Asia and Europe, Russia truly is large enough to be a continent itself. So if you’re planning on going to visit Russia, you should know that you can’t cover the whole territory in a few days.