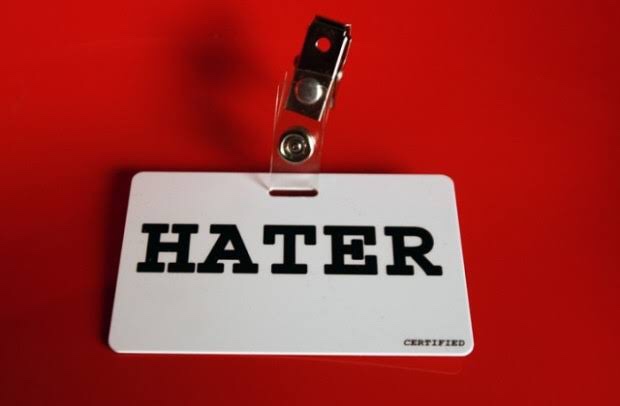 Learning how to deal with haters might be one of the best lessons you will ever obtain. That is because everyone significant will have haters at one point in their lives. The only people without haters are the ones doing nothing. When people think they can’t achieve something they want to make you believe you cannot achieve it too. If you step out and try to prove them wrong, they will also step out and try to prove you wrong for proving them wrong.  These are the people pouring hate speech on your Twitter, Amazon reviews and smearing sly comments on your blogs. They are called haters.  In order to succeed you need to learn how to deal with haters, because the are an inevitable part of life.

I understand what you are going through because I have been there too. You start a  non-profit organization and give all you have, only to find out there are people who believe you are the one becoming wealthy in the process. You publish a book, and though everyone is giving it raving reviews, you are surprised by this one person who claims to have understood precisely nothing of your work. Some people cannot understand running a business is metaphorically as painful and tiring as its physical equivalent. Instead, they proclaim that you are greedy because you are not giving them a piece of the profit. Isn’t it funny how they think they deserve to share in your profits without sharing in your labors?

If only there was a way to make everyone understand that you don’t mean the world any harm; like Steve Jobs said, all you are trying to do is “to put a dent in the universe.”

Negativity is parasite that eats you from the inside out, and it takes a great deal of time and patience to learn how to deal with haters.  At first it may seem difficult if you are not taught correctly. However, in life you can’t decide who offends you, but you can decide how to respond when you are offended. The greater part of dealing with haters involves dealing with your own self. In this article I will tell  you how to soar on the winds of haters. There is no motion without friction and there is no friction without applied effort. Therefore in adversity smile, because friction is a sign that you applied effort and a sign that you are going somewhere!

How to deal with haters in five easy steps…

Haters are egoistic people. I guarantee the reasoning behind their aggressive behavior towards you on social media and IRL (in real life)  has nothing to do with you.  Their main goal is to attract attention to themselves. You are being noticed, therefore they want to be noticed too. This is why the best solution is to ignore them.

If you want to grow someone’s ego give them attention, and if you want to destroy it simply ignore them. That will teach them if they want to boost their ego, you are not the best person to turn to. Attention is too precious a resource to be paid to everyone. Are you aware of the twenty four hour rule? The rules states that whatever issue you ignore for twenty four hours starts to decay. That is why even Facebook has incorporated an information decay algorithm – information gains popularity by being given attention and decays by being ignored. You can best shrink hate speech by ignoring it. People like following dialogues, but if you ignore your hater’s speech it remains a boring monologue that nobody bothers to reflect upon. Don’t frown, smile or cry about it – just live on like it never existed.

Nobody hates a nobody. Nobody hates a dead man. If you have a hater it shows you are somebody – it shows you are alive. Ironically, hate can help make you feel important. You can’t stand up for something without standing up to someone. However, t is precisely standing up to someone that creates your haters. You can’t win at something without out beating someone, and in return, it is beating someone that creates your haters. So if you have haters then throw yourself a celebration party, because haters are a sign that you have stood up to someone and won at something. Haters are a luxury only of the great.

Most times the people who dislike you the most are those that envy you the most. They dislike you because you represent something that they feel they don’t have. You succeeded in area that they failed at. You may even hear some of them openly say “If I had that your luck I would use it for a better purpose.” These words suggest your haters credits your success to luck, because they are envious of your abilities. So next time they throw hate speech at you remember to feel important. “

Haters think they know the way to success, though all they do is talk without ever sulking in it. If you take their words to heart, you might delude yourself into fulfilling insignificant roles that have nothing to do with your dreams. Know that anyone can be your critic, but not everyone can be your advisor.

Advisors asks you questions but enemies question you. Identify people who have succeeded in your field and only appoint those as your advisors. Sometimes they can only be a few as three individuals.  Also, keep in mind that criticism is not the same as counsel. The appointed advisors in your life will help you weed out the constructive criticism from the pure hate.

Ask any F1 racing champion and they will tell you your car goes wheresoever your eyes go. Focus on the road and you will stay on the road, but if you focus on the wall you will run into the wall. Remember, you never wrote that book/launched that product/composed that song for your haters. They were not the reason you got started so don’t make them the reason you stop.

The only people who have the energy to be commentators are the ones watching the game – not playing it. You can’t focus on the noise and the game at the same time. In fact, if you score, the boos will only grow louder. Instead choose your battles wisely because time and energy are always limited. By spending your energy fighting haters you might find you don’t have the energy to build your dreams or fulfill your goals. To be a fighter is different from being a builder.

5. Twist the Tweet – The Best Way to Fight Back

Hurting people creates a chain reaction consisting of pain. If a hater tweets at you you that they wish upon a serious disease such as cancer the best to do is to ignore them. If you chose to take them seriously your bitterness will surely grow into an emotional or even physical cancer of some sort. Understand that no-one can give you the pain that they don’t have. In response, give them the joy and gentleness that you do have.

These are the five steps on how to deal with haters. That’s all for now my friend.