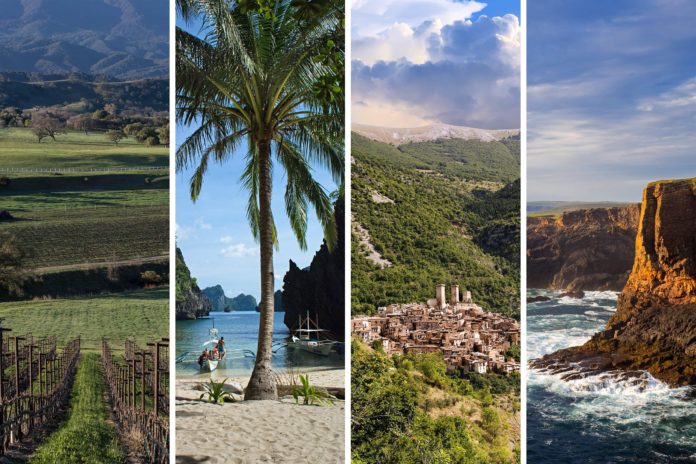 Popular travel destinations usually earn their status for good reason: they deliver on culture, scenery, food or flair. Unfortunately, because of their reputations, the most sought-after regions have become so laden with tourists that some have started turning vacationers away from their busiest areas. Still, if you are able to gain entry, there may be some drawbacks — like price hikes and possible tourist traps.

Turns out, Napa isn’t the only place to drink wine, nor is Tuscany the sole location to experience the best of the Italian countryside. And if you want sun-soaked beaches, you don’t necessarily need to save up for the Maldives. Trips to more under-the-radar and affordable spots around the globe can be just as rewarding as their better-known counterparts — you just have to know where to go.

Here, travel experts weigh in on six alternative travel destinations that will offer up memorable experiences without breaking the bank.

When you think of California wine country, Napa most likely comes to mind. But Santa Barbara County’s picturesque Santa Ynez Valley, about two hours north of Los Angeles, is just as accessible and gives travelers opportunities to drink an assortment of wines for less, says Gabe Saglie, senior editor at Travelzoo. “Grapes in this area are simply cheaper than their Napa counterparts and come in a wider variety — quality Cabernet, like Napa, plus world-class Pinot noir, Syrah and many more,” he says. The official Visit California website also highlights the diverse grapes in the valley, which is uniquely comprised of different geographical regions with varying climates, and the Santa Ynez Visitors Association lists over 120 wineries that you can visit. As for hotel rooms, they’re also generally cheaper than those 300 miles north, Saglie says, which a search comparing the two destinations on Kayak confirms.

Instead of Tuscany, Italy … Go to Abruzzo, Italy

East of Rome, the Abruzzo region of Southern Italy might just be one of the last towns in the country where a tourist can show up and be the only foreigner for miles, says Scott Keyes, founder of Scott’s Cheap Flights. “There are charming, beautiful hill towns — two favorites are Prezza and Pacentro, both easy to access from the ‘hub’ of Sulmona,” he says, “delicious restaurants and agriturismi (farm stays) and some absolutely stunning spots to hike, all for ridiculously low prices.” Case in point: in Pacentro, the top-rated restaurant on Trip Advisor has an estimated price range of $23 to $40 per meal.

Nearby national parks are also free and have picturesque trails that coil around the mountains through forests and fields of wildflowers, Keyes adds.

Although it is possible to explore the islands of the South Pacific (like Bora Bora and Fiji) and the Indian Ocean (like the Maldives) on a budget, the Philippines should be on top of your list if you’re looking for unforgettable beaches and major savings, according to Yoshke Dimen and Vins Carlos, bloggers behind the travel budgeting site thepoortraveler.net. From the U.S., flights to the Philippines tend to be significantly cheaper than flights to Bora Bora, according to travel fare aggregator Skyscanner, and get covered by airline promotions more often, the duo says.

Kayak around the limestone-enclosed lagoons of Palawan, ride the waves of Siargao, or plan a beach day on the fine sand of the newly rehabilitated Boracay, Dimen and Carlos recommend. Other affordable activities, they note, include exploring canyons in the Cebu province — you can do a day adventure tour of climbing, jumping and swimming for under $45 — and diving into the biodiverse waters of Verde Island Passage.

Instead of Spain, France or Italy … Go to Portugal

Value is part of what makes Portugal a Western European gem, according to Saglie. Starting on June 1, more direct flights to the country became available than ever before, making travel from the U.S. more affordable than it’s been in years — whether flying to Lisbon or the volcanic islands of the Azores, Saglie says. “In 2019, the country’s flagship airline TAP has added nonstop flights from D.C., Chicago, and even San Francisco,” he adds.

Portugal is typically less crowded and less expensive than other European destinations such as Spain, Italy and France, but the arts, food and wine scenes rival those in other countries, Saglie says. According to the official Portugal tourism website, you can expect to pay around 70 to 80 cents for espresso at a traditional café, while meals at mid and high-end restaurants are typically between $15-25 and $35-60 per person, respectively. For activities, Portugal’s tourism site estimates museum, special exhibit and national monument entrance fees will cost you between $3-12 with theater and performance tickets ranging from $11-$85 depending on the event.

Instead of Iceland … Go to the Shetland Islands

These subarctic Scottish islands, which are closer to Norway than the U.K. is, are a far cry from tourist-filled Iceland yet still far enough north for visitors to spot the Northern Lights on clear nights, says Keyes. For prospective price points, an 11-day guided tour of Shetland and other parts of Scotland can cost you $7,890 with guided tour and cruise operator Tauck, while a shorter, eight-day tour of Iceland with the same company has nearly the same price tag at $7,590.

The Shetlands are also filled with historic sites, rugged natural beauty — and good whiskey. “The islands also play host to Up Helly Aa, a Viking-inspired fire festival that takes place every January and is not to be missed,” Keyes says.

Instead of the Bernese Alps, Switzerland … Go to the Austrian Alps

“It isn’t hard to be cheaper than Switzerland, however, it’s hard to match Switzerland for sheer natural beauty,” says Keyes. Austria manages to come pretty close. Hallstatt, he says, is a scenic village in Upper Austria with historic buildings, mountains and lakes.

For snow sports, Mölltaler Gletscher in the eastern Alps has picturesque glaciers and is located in the sunniest part of Austria. And, for mountainous and lake-filled landscapes, head to Vorderer Gosausee, three lakes in the Alpine part of Austria, Keyes suggests. Websites like Numbeo and MyLifeElsewhere, which compare country and city costs, confirm the location’s affordability, too. Based on both websites’ results, which use crowdsourced and agency data, restaurant and grocery prices, transportation costs and shopping expenses are all lower in Austria than in Switzerland.

While these locations aren’t “super cheap by European standards,” Keyes says, “practically everything, from accommodations to beer to train tickets, are cheaper in Austria than in Switzerland.”