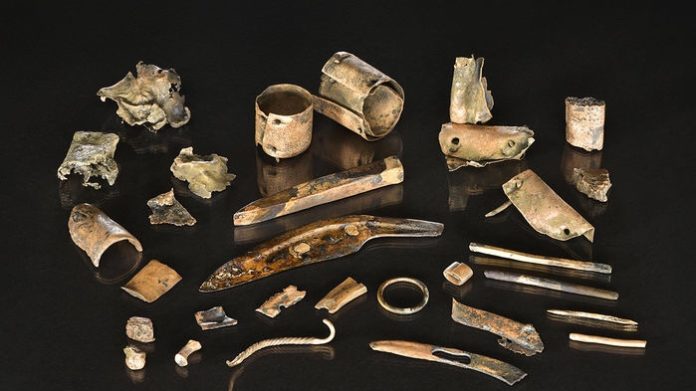 Bronze Age Europe was a violent place. But only recently have scientists uncovered the scope of the violence, at a 3000-year-old site in northern Germany where thousands of well-armed young men fought with sophisticated weapons in what appears to be an epic battle. Now, a bagful of bronze artifacts and tools found at the bottom of the river in the middle of the battlefield suggests some of these warriors traveled from hundreds of kilometers away to fight. That suggests northern European societies were organized on such a large scale that leaders could call warriors to distant battlefields, long before modern communication systems and roads.

“It’s extremely rare to find a box or pouch [like this],” on an ancient battlefield, says Thomas Terberger, an archaeologist with the Lower Saxony State Office for Cultural Heritage in Hanover, Germany, who describes the find with colleagues in a paper published today in Antiquity. “Somebody lost it there.”

The battle raged in a narrow, swampy valley that runs along the Tollense River, in Mecklenburg-Vorpommern, 160 kilometers north of Berlin. Many of the artifacts sank below the water and were preserved in pristine condition. Since the site was discovered in 1996, archaeologists have uncovered metal and wooden weaponry and more than 12,000 pieces of human bone.

The new find, unearthed in 2016, includes cylindrical fragments of bronze, along with a bronze knife, awl, and small chisel. The jumble of tools and scrap metal resemble someone’s personal effects, rather than a ritual deposit or hoard. Archaeologists say the tools were likely in a bag or box that decayed. But the contents were held in place by the thick mud of the riverbed—until divers found them some 3000 years later.

Dozens of similar collections of scrap bronze, along with small tools for cutting it, have turned up in the graves of high-status warriors from much farther south, along the northern foothills of the Alps from eastern France all the way to the modern-day Czech Republic. (At the time, bronze was the height of metallurgical—and military—technology.) But this densely packed cluster of bronze objects is the first of its kind found this far north.

The new find supports the hypothesis that warriors traveled many hundreds of kilometers from their homeland to the battlefield, showing social organization on a grand scale. The artifacts fit with previous evidence that some bones found on the battlefield had a strontium content that didn’t match isotopes found in people raised in the region.“This shows people were a lot more mobile than we thought,” says archaeologist Helle Vandkilde of Aarhus University in Denmark, who was not part of the study. “The implication would be the objects accompanied people on the move.”

The watery conditions below the surface also preserved bits of wood, including the awl’s birch handle, which helped archaeologists date the finds. Within a few meters of the bronze objects, divers found more debris from the battle, including arrowheads, dress pins, a bronze knife with a bone handle, and a human rib and cranium. All the finds date to about 1300 B.C.E., supporting the idea that they were part of a single event.

The bronze scraps and chisel to cut them are suggestive of something else, too: the dawn of currency. “Metal objects are starting to become not only tools but money,” Terberger says. “The fact that they had the possibility to trade with each other is something new.”