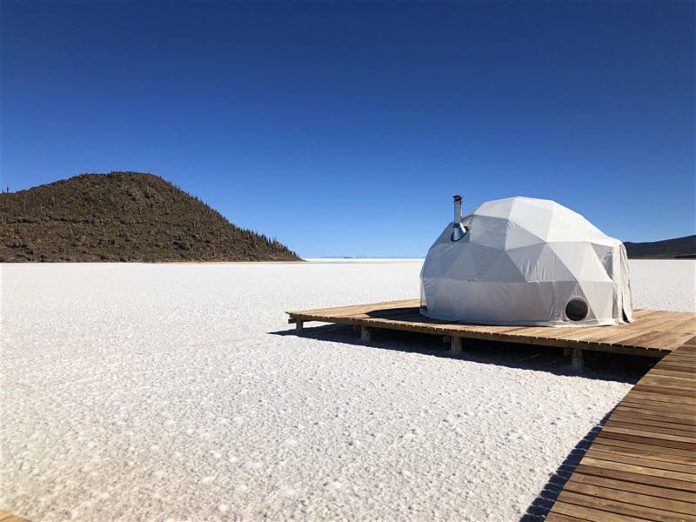 Camping in the world’s wildest places doesn’t mean you need to give up the hope of a relaxing holiday. If you have the budget, there are terrific Camping sites across every continent for any traveller who wants to experience solitude in far-off places, without compromising on comfort. We’ve rounded up ten of the best Camping experiences in remote places to inspire you.

Between the salt flats and the stars

Bolivia’s Uyunui salt flats are eternally captivating to travellers and now Kachi Lodge allows you to stay in the middle of this otherworldly landscape. As well as views of the plains ahead, it’s the perfect spot for stargazing, sitting at 3600m elevation. The lodge also runs on solar energy, with its own water treatment unit for added sustainability.

Immerse yourself in the Sanatan way of life

Nestled in the mountains of the Ladakh region of India, the Chamba Camp is steeped in local Hindu and Buddhist culture. Packages include trips to the picturesque monasteries of the region during the day, while in the evening you can enjoy private dining with ingredients picked from their own organic garden. Open from May to October.

Puerto Rico’s first official upmarket camping experience, Pitahaya Glamping Retreat enjoys some of the darkest skies in the country, making it possible to see the Milky Way at night. You’ll have access to five acres of nature reserves around you, as well as spectacular beaches on the southwest coast some 20 minutes away. Too relaxed to move? There’s also a pool to cool off during the day.

Sleep under the Northern Lights

Living up to its name, this Northern Lights Wilderness Camp in Finland is in a different location every winter season. You’ll have the entire place to yourself, as you’re shuttled to and from by snowmobile. The amenities are basic: there’s only room for two but the clear roof means you have the best chance of spotting the elusive Aurora Borealis during the night. Available between January and April.

Dine in the shadow of Uluru

Relax in the heart of outback Australia at Longitude 131 while gazing at the natural wonder that is Uluru. On site there is a spa using products made with local ingredients and an open-air terrace gives you the option to dine under the stars. Guests can also delve deeper into Aboriginal culture, learning about the creation stories of the local Aṉangu.

A Martian experience on Earth

Dubbed the ‘Martin Domes’, the signature lodgings in this Sun City Camp are settled in the red dust of the desert wilderness of Wadi Rum, Jordan Coming equipped with air conditioning to keep you cool, it’s the perfect base to try the quintessential adventures like a jeep tour over the dunes, sunrise yoga or a float in a hot air balloon.

Sustainable adventures in the UAE

Stretched across its own private peninsula in the ecotourist enclave of Kalba, Kingfisher Lodge boasts just 25 tents in total for an expansive sense of privacy. Explore the region’s spectacular biodiversity by day and retire to the dining tent for a glorious buffet after dark.

Wake up in the wilderness

This stunning high-altitude Highlands Camp is in the Ngorongoro Crater, a World Heritage Site which is Tanzania’s only conservation area that also supports human habitation. Learn about Maasai culture and be rewarded with views over this unique ecosystem at night from your luxury domes in the morning.

Holiday at the end of the world

Glamping doesn’t get more remote than this. Antarctica’s only luxury accommodation, White Desert skips the traditional gruelling – but spectacular – journey and instead flies visitors in, staying in a temporary but comfortable dome with meals cooked by an award-winning chef. Trips only run in November and December and the company is accredited as carbon neutral.

Retreat into the forest

Cloud House is an off-the-grid farm hidden in the middle of 17 spectacular acres of lush forest in Andalucía. Each room is a private space cocooned among the trees, filled with unique pieces made by local craftspeople. Start your day with freshly squeezed orange juice from the nearby trees before setting off on hiking routes stretching across Sierra Bermeja Mountain Range.

The Ultimate Travel Guide to Zimbabwe