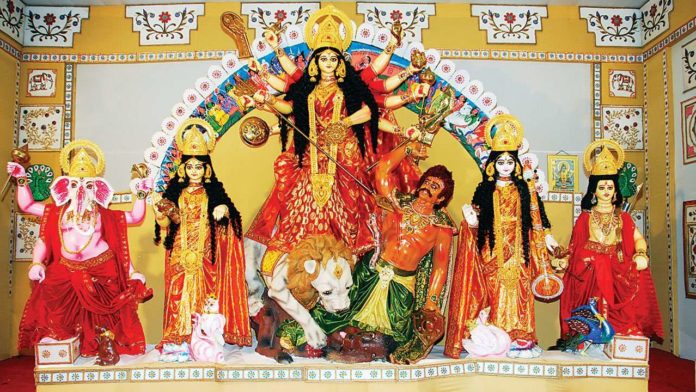 Durga Puja is a widely celebrated festival in India. With the ceremonial worship of goddess Durga, it forms an essential part of the culture. Not only does it form an important festival for the Hindus, but it is an occasion where everyone is united and rejuvenated in the spirit of Maa Durga. The rituals involve ten days of fast, followed by feasting and devotional worship of goddess Durga. The last four days are called Saptami, Ashtami, Navami and Dashami. Dashami is the last grand day for the festival. Durga puja is extremely enjoyed with great passion in India especially in Bengal where the goddess is considered to be a symbol of mother.

The origin of Durga puja

With such widespread celebration, there is a rich history that Durga puja originates from. Mythologically, Durga puja is celebrated in the ‘Ashwin maas’ when Lord Ram took blessings from the goddess before going into was with Ravan. This is the reason why this is also known as ‘Akal Bodhan’ which stands for out of season worship.

The earliest records of the existence of Durga puja date back to the fifteenth century. The landlords and zamindars in Bengal celebrated Durga puja for the blessings of the goddess for a prosperous and fulfilling life. The Sharodiya Durga puja was held in the autumn months in this era. Under the rule of rulers like Raja Kangshanarayan from Taherpur and Raja Bhabananda Mazumdar from Nadiya, this form of pujan became very popular. This would be the time of the year when all distant families would come together to pray for prosperity and well being of their loved ones.

The Guptipara community from Hoogly is the original pioneers of the Durga puja that we see todau. This started as a community of twelve people hence the puja began as the ‘twelve pal’ puja. They collected contributions from the entire locality and brought Durga puja to their houses. This is how ‘Baro yaari’ puja came into existence. By the seventeenth century this was adopted throughout Bengal especially in the regions of Murshidabad.

In the nineteenth century the ‘Sarbajanin’ puja originated from the baro yari puja. The first grand Durga puja was celebrated in India in Baghbazar, Kolkata with complete participation from the public and full vigor. By the end of the nineteenth century this was welcomed by other Hindu communities and it came to be the grand Durga puja that is celebrated in India today.

The essence of Durga Puja

Every year the idol of the goddess Durga is worshipped along with her four children Kartikeya, Ganesha, Saraswati, and Lakshmi. These gods are depicted with their powers and ‘vahan’. Massive pendols are set up with different activities organized for the people to come together and celebrate the spirit of Maa Durga. Festivities like Anjali, Aarti, Shoshti pujo and many other rituals are performed with their significance for adding a sense of rejuvenation to our lives.

The essence of Durga puja is that of power and faith. We believe in the power that the goddess bestows on us and have faith that we will be shown the right light in whatever we seek in life. Every year thousands of Indians seek this blessing and move ahead with a refreshed spirit. What is special about Durga puja is the love people share for Durga Maa in their hearts, she is like a mother who protects, loves, empowers and uplifts. The energy and vibe around Durga puja celebrations in India, thus, remain unmatched to any other. Every year Maa blesses the country and the power of faith is strengthen in our hearts.