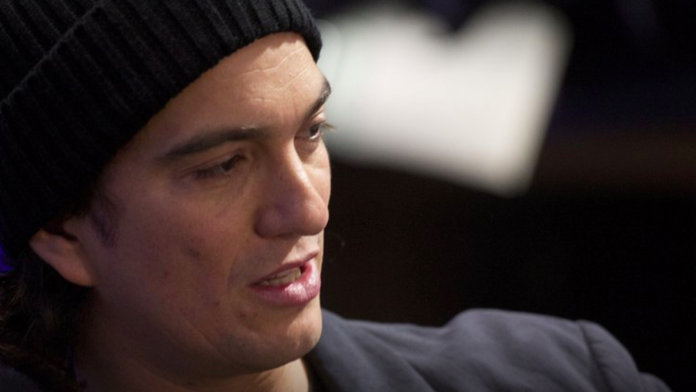 WeWork’s charismatic but controversial CEO is stepping aside from the communal office-space company he founded, another moment of reckoning between the fast-growing startup and its disenchanted investors.

The New York-based company said Tuesday that Adam Neumann will be replaced by two co-CEOs: Artie Minson, formerly co-president and chief financial officer, and Sebastian Gunningham, formerly vice chairman. Neumann will remain on its board as non-executive chairman.

WeWork’s meteoric growth and carefully designed spaces with cool offerings like free beer and meditation classes gave it the aura of yet another tech company led by a magnetic personality. It was initially valued at $47 billion by private investors.

But Wall Street began raising questions after the company delayed a planned initial public offering earlier this month. The company was having trouble drumming up interest in the offering after revealing massive losses in its IPO filings. WeWork’s revenue rose sharply to $1.8 billion in 2018, but the company lost $1.6 billion the same year.

WeWork leases buildings and divides them into office spaces to sublet to members, which include small businesses, start-ups and freelancers who can’t afford permanent office space. But with location operating expenses — mostly rent — amounting to some 80% of revenue, it has been heavily reliant on cash infusions from its private investors.

Adding to its problems have been concerns about Neumann’s behavior. He used some of his WeWork stock to secure a $500 million personal loan prior to the IPO. He also drew criticism after The We Company — WeWork’s recently renamed parent — paid him nearly $6 million for the trademark “We.” He returned the money following the backlash.

“While our business has never been stronger, in recent weeks, the scrutiny directed toward me has become a significant distraction, and I have decided that it is in the best interest of the company to step down as chief executive,” Neumann said in a statement.

Tim Derdenger, associate professor of marketing and strategy at Carnegie Mellon University’s Tepper School of Business, said WeWork’s board clearly realized that Neumann’s conflicts of interest and management style weren’t a good fit for a company that will face even more scrutiny once it goes public.

He said keeping Neumann on the board could be a win, since it will allow him to keep doing what he does best — promoting and marketing the company — while leaving oversight to others.

“This is a good time for them to reset and refocus and move forward with their business model,” Derdenger said.

Leaders with strong personalities at other companies have taken a hard fall. Uber co-founder and CEO Travis Kalanick was forced to resign in 2017 after allegations of sexual harassment at the company and an incident in which he yelled at an Uber driver. Silicon Valley investment firm Benchmark Capital, which pushed for Kalanick’s ouster, is also the second largest shareholder for WeWork.

Uber’s lackluster IPO this year has caused some investors to look more sharply at tech darlings like WeWork. Some suggest WeWork isn’t even a tech company at all, but a real estate company that integrates technology into its services.

In the end, skepticism about when or if WeWork will become profitable is the biggest reason for the public market’s chilly reception, more than the concerns about Neumann, said Kathleen Smith, principal at Renaissance Capital, a provider of institutional research and IPO funds.

“It’s about the business,” she said. “They’re going to need more than just that change if the goal is to try to tap the public market again.”

Sometimes, investors are willing to be patient with companies that are losing money but growing rapidly. Amazon is the poster child for this, and it’s become one of the most valuable companies in the world following years of losses.

“With WeWork, they weren’t even showing that progression,” Smith said.

Israeli-born Neumann co-founded WeWork in 2010 with one shared office in Manhattan. It now operates in 111 cities worldwide and serves 527,000 members.

In a joint statement, Minson and Gunningham said they are evaluating the optimal timing for an IPO.

“Our core business is strong and we will be taking clear actions to balance WeWork’s high growth, profitability and unique member experience,” they said.