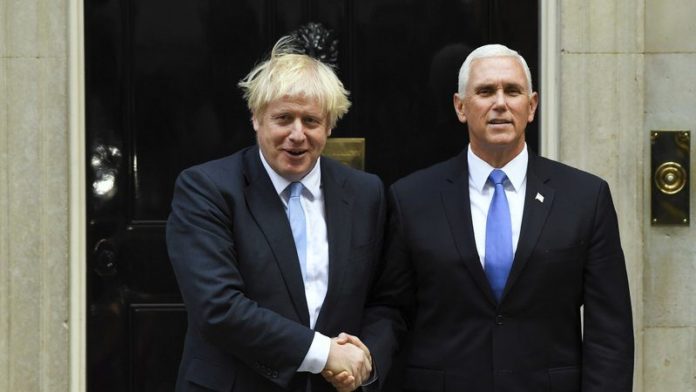 WASHINGTON (AP) — Brexit is not a reality yet, and already a new suitor has come calling: the United States.

During a visit this week to the United Kingdom, Vice President Mike Pence brought word from his boss, President Donald Trump: The United States is eager to reach a new trade pact — one that won’t be possible until Britain completes Brexit and moves out of the 28-country EU trading bloc.

“Our message is clear: The minute the U.K. is out, America is in,” Vice President Mike Pence said in a visit with British Prime Minister Boris Johnson at 10 Downing Street on Thursday.

Building a new U.S.-U.K. trading relationship atop the wreckage of Brexit won’t be easy.

British officials are already vowing to resist an agreement that is lopsided in favor of the more powerful United States, creating potential for disputes over matters such as chlorinated chicken and the divisive Scottish dish haggis.

“I know that you guys are pretty tough negotiators,” Johnson told Pence. “So, we’re going to work very hard to make sure that that free trade deal is one that works for all sides.”

As a member of the EU, Britain outsourced its trade policy to the bloc’s bureaucrats in Brussels. Before it can pursue an independent course and reach a brand-new trade pact with Washington, London will have to negotiate a divorce with the EU— or crash out of the bloc without a deal and risk damaging its own economy.

“Until that gets resolved, this is all speculation,” said Christine McDaniel, senior research fellow at George Mason University’s Mercatus Center.

And the terms of the U.K.-EU split will complicate any deal with the Americans, which will have to be approved by Congress.

No obstacle looms larger than the fate of the border between the independent Republic of Ireland and Northern Ireland, which is part of the United Kingdom.

Currently, people and goods can freely cross the Irish border without encountering immigration or customs checkpoints because both the U.K. and Ireland belong to the EU, which allows free trade and travel among its members.

The question is: What happens to the Irish border if Britain leaves the EU? If the border stays open, a U.S.-U.K. trade deal won’t work. That is because an open border would allow goods from the remaining 27 EU countries to slip into Britain via the Republic of Ireland. Those goods could then be exported to the United States under the favorable terms of what is supposed to be an exclusive deal between the U.K. and the U.S.

But creating a hard border between the two Irelands would risk conjuring up old animosities and undermining the historic Good Friday accord of 1998 that brought peace to an island long torn by violence.

What’s more, House Speaker Nancy Pelosi has repeatedly said there is “no chance” the U.S. Congress will approve a trade pact with Britain if Brexit closes the Irish border.

Still, there are reasons for optimism if the Brexit issues can be resolved. Trump has a friendlier relationship with Johnson than he does with many other leaders. So it’s possible that U.S.-U.K. trade talks can proceed more smoothly and quickly than American negotiations with, say, China.

Some issues are likely to prove thorny. Britain’s farmers have been shielded from export competition under the EU’s protectionist agricultural policies. The U.S. intends to demand more access to Britain’s agriculture market post-Brexit, according to a list of negotiating objectives the Office of the U.S. Trade Representative published in February. Accepting more competition from American farmers could prove a tough sell in Britain.

And there are other sensitive issues. In June, Trump caused a stir when he said that “everything” — including Britain’s National Health Service — would “be on the table” in U.S.-U.K. trade talks. The British are fiercely protective of the state-run health system, which delivers free medical care to everyone. Although Trump later walked back the idea, Johnson reiterated this week that “the National Health Service is not on the table.”

Johnson also suggested that America needs to lift its ban on Scottish haggis — a savory pudding cooked in the stomach of a calf or lamb — and made a joking reference to British fears that the U.S. would insist on more lax food safety standards, resulting in an influx of chlorinated chicken from the United States.

Trade between Britain and its one-time colonial possession is already brisk, moreover, which suggests that the potential for big economic gains in either country might be slim.

Last year, the United Kingdom was America’s fourth-biggest export market. And the United States, which runs chronic trade deficits with most of its major trading partners, reported a trade surplus — $18.6 billion worth — with Britain in 2018.

Even so, a U.S.-U.K. deal would represent a powerful show of support for Britain after a messy divorce with the EU. “Clearly the British government is using this as a signal that they can do without Europe,” said Robert Lawrence, professor of trade and investment at Harvard University’s Kennedy School.

Trump’s top economic adviser, Larry Kudlow, said the administration wants to get to work on an agreement, but acknowledges it has to get the green light from the United Kingdom first. In the meantime, the U.S. will focus on other agreements in the works, especially the U.S.-Mexico-Canada Agreement that is meant to replace a 25-year-old North American trade pact.

“It’s not a tomorrow question. I mean the most important trade deal is USMCA. That is our top legislative priority,” Kudlow said.