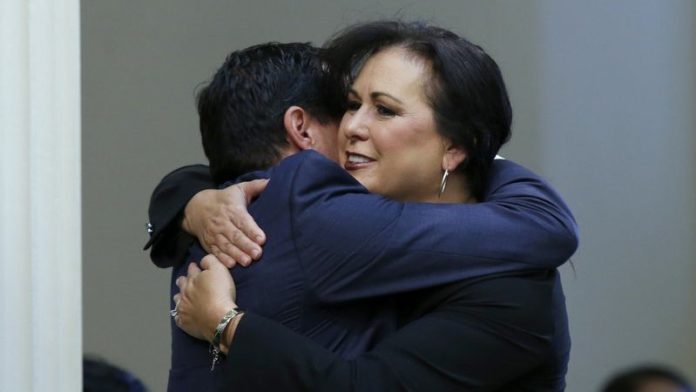 The measure heading to Democratic Gov. Gavin Newsom outlines a three-part test that makes it harder for companies to classify workers as independent contractors who are not entitled to minimum wage and benefits like workers compensation.

Uber has argued that forcing its drivers to become employees would upend a business model that is built on flexibility. General counsel Tony West suggested to reporters that the ride-hailing company won’t start treating its workers as employees come Jan. 1, instead defending its model if it faces legal challenges.

“Just because the test is hard does not mean we will not be able to pass it,” he said.

Newsom has pledged to sign the measure, but his office hopes to bring ride-hailing and meal delivery companies to the table with labor unions to negotiate a separate set of rules for workers who pick up jobs on their own schedules in the so-called gig economy.

The freshman governor faces a test of his ability to broker a compromise between powerful interest groups in Silicon Valley and organized labor. Steve Smith of the California Labor Federation, a sponsor of the legislation, said the companies so far haven’t made acceptable proposals.

If Newsom signs the legislation, it could have national implications as politicians and businesses confront the shifting nature of work.

New York Gov. Andrew Cuomo, a Democrat, has indicated interest in pursuing a similar measure, and almost all the Democratic presidential contenders have offered similar proposals at the federal level.

“It’s forced the nation to take a look at what the future of work is going to look like,” Democratic Assemblyman Ian Calderon of Whittier said in supporting the bill.

The measure would enshrine in law a 2018 California Supreme Court decision that makes it harder for companies to classify workers as independent contractors instead of employees. While the court’s decision has set legal precedent since last year, the legislation provides enforcement tactics to the state and to city attorneys, who could sue companies they believe are failing to comply.

But Uber, Lyft and delivery companies such as DoorDash and Postmates aren’t ready to concede.

Uber and Lyft have already dumped $60 million into a committee for a ballot measure next year if Newsom doesn’t broker a deal. They have said the ballot measure would set a base hourly wage, give workers access to benefits they can take with them to other companies and allow drivers to collectively bargain without making them employees.

Lyft spokesman Adrian Durbin would not comment on whether Lyft shares Uber’s position that it will not reclassify its workers come Jan. 1.

“We are fully prepared to take this issue to the voters of California to preserve the freedom and access drivers and riders want and need,” Durbin said in a statement.

The legislation is likely of intense interest to the companies’ investors — both Uber and Lyft are publicly traded. Wedbush analyst Daniel Ives wrote in a note to investors that the firm expects gig economy companies to push back and find middle ground.

The measure lays out a three-prong test to decide if workers can be labeled as contractors: The worker must be free from control of the company, perform work “outside the usual course of the hiring entity’s business” and be engaged in an independently established trade, occupation or business of the same nature of the work they are performing.

“This isn’t perfect, but I think this goes a long way to protecting workers, legitimate small businesses, legitimate businesses that play by the rules, and we, as taxpayers, that have to clean up the mess when these businesses don’t provide enough for their workers,” said the bill’s author, Democratic Assemblywoman Lorena Gonzalez, her voice shaking with emotion.

Her legislation had been the target of intense lobbying efforts, not just from gig economy companies. Because it would affect all job sectors, many have successfully pushed for exemptions.

Critics say by writing so many exceptions, the Legislature is unfairly picking winners and losers.