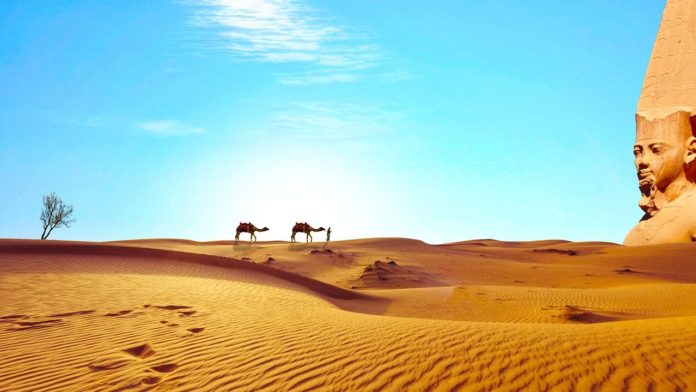 In recent years, the number of people touring Egypt has slowly dwindled. This is most likely due to the violence in the Middle Eastern region and the few bombings and kidnappings that have occurred in recent years. However, these cases are pretty much isolated, and the thousands of people who visit Egypt every year thoroughly enjoy their experience there.

Egypt is famous for a lot of things, from their exotic perfumes, fine cotton, and the mysteries of mummification and their ancient religion. However, I would like to focus on the architectural and engineering wonders of the Egyptian civilization. When the tribes in Europe and Africa were still building huts and shelters, the Egyptians have already constructed monstrous monuments hundreds of feet in height and width. It is this superiority that has elevated the ancient Egyptian civilization as one of the greatest civilizations in the world.

The Great Pyramids of Giza

By far the most famous of Egypt’s architectural wonders are the 3 Great Pyramids located at Giza, near Cairo. These monuments are hundreds of feet in height, and have survived the test of time for the last 4500 years. There are over a hundred pyramids of various sizes in Egypt, and more in neighboring Sudan. These monuments serve as tombs for the great pharaohs of ancient Egypt, and stand as testimony to the power and influence of these pharaohs.

When you stand at the bottom of the Great Pyramids, looking up at their magnificence, the feeling is indescribable. You begin to wonder just how the ancient people managed to construct this huge structure with only the help of the simple tools available at that time. And this feeling of awe intensifies when you take the opportunity to descend into the pyramids via the original entrances that were used thousands of years ago. When you touch the walls of the now-empty tombs beneath the pyramids, you will feel as if you were there thousands of years ago when the tombs were freshly carved. (One warning: You might not want to enter the pyramids if you are claustrophobic!)

Next to the Great Pyramids at Giza is the enigmatic Sphinx. A gigantic statue with the head of a man and the body of a lion, the great Sphinx stares silently at the east, perhaps watching the sunrise, or perhaps protecting the great pyramids from whatever evils that may threaten to destroy them. The Sphinx is just as old as the pyramids, aging over 4500 years (or more, depending on which group of archaeologists you believe).

Almost everyone has heard of the Sphinx with its missing nose, and some might wonder how he actually lost his nose. (Do not believe what you saw in the Disney cartoon Aladdin) Almost everyone has seen many pictures, or perhaps the Discovery channel, showing the Sphinx in various angles. But you have to visit it, to stand there right next to it, to realize why both the Sphinx and the Pyramids are the most famous man-made structures in the world. Just the front paw of the Sphinx is larger than a human being!

The Wonders of the Nile

The architectural wonders of ancient Egypt are not limited to those at Giza. As you travel along the Nile River (incidentally the longest river in the world), you will come across other monuments. Chief of these is the Valley of Kings near Luxor. It is here that many kings from many of the ancient Egyptian dynasties were entombed. Each tomb is unqiue and is a wonder in its own right. Unfortunately, most of the treasure that was entombed with the pharaohs have long been stolen by tomb raiders. Only the well-hidden tomb of Tutankhamun managed to survive more or less intact to this day.

Further south, near the town of Aswan, are the famous temples of Abu Simbel. Constructed during the reign of Ramses II, better known as Ramses the Great, these two temples feature much-larger-than-life statues guarding the entrances. And beautiful hieroglyphs still adorn the walls of the temples.

The few monuments I’ve mentioned are just a small fraction of the many wonders that can be found in Egypt. If you have any interest in ancient civilizations, or want to know more about the wonders of ancient Egypt, you owe it to yourself to visit this ancient land before its wonders are eventually swept away by the sands of time.