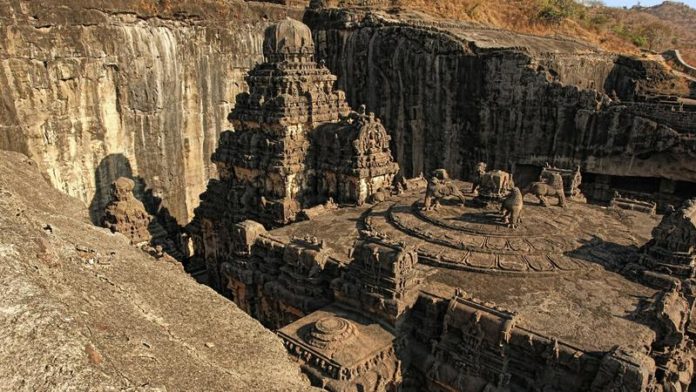 Stone sculpture is one of the most incredible art forms out there. Just imagine the patience it takes to carve David out of a single piece of marble. Well, it takes a lot less work than it does to carve a whole friggin’ temple out of a cliff. Welcome to Kailasa.

You know that thing where people use ancient monuments as proof that humans used to have incredibly advanced technology, or that aliens must have helped us build Stonehenge and the Pyramids? Well, we’d wager a guess that Kailasa temple gets it worst of all. Seriously, try looking up this Indian temple online and see how long it takes to get you to a headline that doesn’t suggest supernatural intervention. Look, anything’s possible, but we’re guessing that the Rashtrakuta dynasty didn’t need alien help. After all, rock-cut architecture wasn’t exactly a secret to Indian society at the time.

At 98 feet (30 meters) tall, Kailasa temple is 50 percent taller than the Parthenon in Greece. What set this temple apart from other buildings of its type isn’t just its scale, however. It actually did require the architects to develop an innovative new method to pull it off. Instead of carving patterns and sculptures into a wall, the temple was built from the top down. Armed only with hammers and chisels, the builders started from the peak of the mountain and carved out the intricate roofs first, then the tops of the columns, then the sculptured elephants, from their detailed heads all the way to their toes. Then you spread out to cover the floor (make sure you get all the edges of the columns!) and voila — you’ve got an ornate stone temple covering an area 150 by 270 feet (82 by 46 meters). And all you had to do was remove between 200 and 400 thousand tons of stone.

A Technique Set in Stone

Like we said, rock-cut architecture was very familiar to ninth-century India. In fact, Kailasa isn’t even the only rock-cut temple in its immediate vicinity. Actually, when you look it up as a World Heritage Site, you’ll find Kailasa listed as “Cave 16” — it’s only one of 34 such sites in the Ellora cave complex. Interestingly, although Kailasa itself is a Hindu structure, many of the other religious buildings in the complex pay homage to Buddhist and Jain traditions. That’s because the Rashtrakuta were tolerant of the many religions popular in India at the time. Guess it just goes to show what you can accomplish when you’re open-minded.