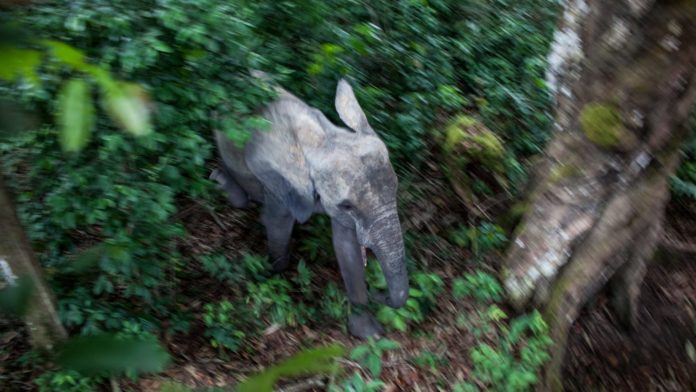 If the species like Elephants are wiped out by poachers, Africa’s vast rain forest will lose 7 percent of its carbon storage ability, scientists estimate.

Forest elephants — the smaller, endangered relatives of African savanna elephants — promote the growth of large trees that excel at storing carbon, according to research published in the journal Nature Geoscience.

“This new paper points to something that we in Central Africa have suspected for a long time, but now this group has thrown some serious science at the issue,” said Fiona Maisels, a conservation scientist at the Wildlife Conservation Society and at the University of Stirling in Scotland.

With the loss of forest elephants,” she added, “loss of carbon stocks can be added to the list of ecosystem services that are no longer provided by these animals.”

Over recent years, researchers have gained a more detailed understanding of the links between animals and climate. Wild grazers, for instance, can reduce the intensity and frequency of fires that emit greenhouse gases. Methane emissions from livestock significantly contribute to global warming.

Scientists have also known for decades that large herbivores such as elephants play important short-term roles in ecosystems by promoting biodiversity, recycling nutrients and dispersing seeds.

Fabio Berzaghi, an ecologist at the Laboratory of Climate and Environmental Sciences in France and the lead author of the new study, suspected that elephants might also play a profound long-term role in shaping Africa’s rain forest, second in size only to the Amazon’s.

The loss of these and other large herbivores likely contributed to the Amazon’s higher density of smaller trees, with a lower overall amount of vegetation compared with Africa’s rain forest.

“We were thinking elephants may play a role in the differences between these two continents’ forests,” Dr. Berzaghi said. “We also really wanted to know what the long-term consequences of losing this species would be.”

Both sites were relatively pristine and differed only in the presence or absence of elephants. The researchers measured the trunk size of all the trees in the study areas and noted the species, giving them an idea of the short-term effects of elephant loss.

To determine the long-term effects, they created a computer model that simulated the basic functions of the African rain forest, including tree growth and death, competition, photosynthesis and reproduction. The model allowed them to include or exclude elephants.

Forest elephants almost exclusively stomp down trees with a diameter of 12 inches or less, and they prefer to eat fast-growing softwood trees. By clearing the understory of vegetation, the researchers found, elephants not only alter plant composition but also affect light penetration and water availability.

This results in an ecosystem that favors large, slow-growing hardwood trees. Such species store significantly more carbon than the equivalent volume of smaller softwood trees.

“As a tree, there’s a trade-off — you can’t have it all,” Dr. Berzaghi said. “You either invest in growing fast, or in building a lot of structure with carbon to be more resistant.”

Extrapolating their findings to the whole of Africa’s rain forest, Dr. Berzaghi and his colleagues found that the disappearance of elephants would result in a 7 percent loss of vegetation — the equivalent of 3 billion tons of carbon storage.

“This is the first study I have seen attributing large, multi-megaton changes in carbon to a particular species,” said Rosie Fisher, a scientist at the National Center for Atmospheric Research in Boulder, Colo., who was not involved in the research. “It really opens a new frontier in how we think about interactions between large animals and carbon storage.”

Save for a few surviving populations, forest elephants are functionally extinct in almost all of their former 850,000-square-mile habitat. The species declined by 62 percent from 2002 to 2011, Dr. Maisels and her colleagues found, and poaching has largely continued unchecked since then.

According to Iain Douglas-Hamilton, the founder of Save the Elephants, a conservation organization based in Kenya, the killing has most recently spread to Gabon, which holds half of the world’s remaining forest elephants and was previously protected from poaching by its relative isolation.

“This study comes at a time when forest elephants are threatened as never before,” Dr. Douglas-Hamilton said. “It is appalling that just as we are beginning to understand how elephants might have a key role in Africa in sequestering carbon, they are under real threat of eradication.”

One limitation of the study, Dr. Berzaghi said, is that we do not know how much carbon has already been lost because of the elephants’ decline. But it does seem certain, he added, that putting a stop to poaching and restoring forest elephant populations would bring climate benefits.

“There’s evidence mounting that elephants are a key species that benefit not just their ecosystem, but all ecosystems,” he said. “Climate change is a complex issue that will probably require a lot of small solutions, and this might be one of those solutions.”