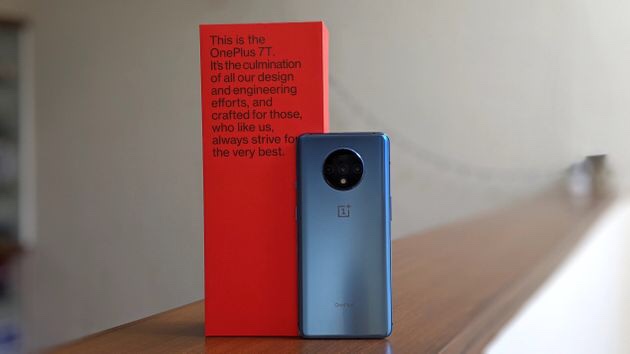 OnePlus has, in the recent past, timed its biannual releases to coincide with the latest Qualcomm chip or to release a fresh new design. With the new OnePlus 7T going on sale barely four months after the OnePlus 7 and OnePlus 7 Pro went on sale, let’s start by acknowledging one thing. Anyone who bought a OnePlus 7 then has good reason to be ticked off by the launch of the new phone,

But if you resisted the brand at that time, then you might find the OnePlus 7T a much better proposition.

Te phone’s combination of slick design, high-end specifications and that unmistakably-OnePlus hallmark of overall fluidity, courtesy the 90Hz display and the polished Android 10-based Oxygen OS are quite compelling. The level of refinement and polish OnePlus continues to deliver is still very worth your consideration, even as the competition gets fiercer.

The OnePlus 7T may look similar to the OnePlus 7 from the front, but only just. The all-new circular camera bump on the rear gives the rear a rather Moto Z look, only way more premium with the use of metal and frosted glass.

The display gets taller with a 20:9 aspect ratio, which bumps up the size to a palm-stretching 6.55-inches (vs the 6.41-incher on the OnePlus 7) bringing it closer in form factor to the OnePlus 7 Pro, with the scaled-down waterdrop notch taking the place of Pro’s pop-up camera module.

The phone is tall, but the flat display and the ever so slightly narrower body means that the OnePlus 7T sits way better in the hand than the bulky and ungainly OnePlus 7 Pro. The ever-handy mute slider remains, as do the somewhat-mediocre stereo speakers, unfortunately.

The phone lacks any IP-rated waterproofing (OnePlus opts for independent water-resistance certification ostensibly to keep costs down) or wireless charging, so those shortcomings continue onto this generation as well.

Flip it around and you’ll see the biggest feature that OnePlus borrowed from the OnePlus 7 Pro-the AMOLED display with a 90Hz variable refresh rate-a feature that, once you get used to, you never want to return to a phone without it.

The benefit of a high refresh rate display is felt on practically everything you do with the phone, but it is difficult to understand the improvements over a standard 60Hz display unless you see it in person.

The panel is still 1080p, but it’s plenty bright and ships with HDR10/HDR10+ support, the latter allowing you to enjoy all the new color- and contrast-rich shows Netflix keeps on adding. The in-display fingerprint scanner felt a tad slower than the OnePlus 7 Pro, but the face unlock usually gets there faster anyway.

The new camera setup on the rear is one of the big changes, on paper at least. The camera packs the du jour 48MP Sony IMX586 sensor that we saw previously on the OnePlus 7 Pro, with its pixel-binning magic turning out high-quality 12MP images.

You’ll be happy with the images the OnePlus 7T takes, for the most part–it over accentuates the reds, sometimes overexposes trickily lit scenes and manages just fine with portrait and super macro shots-but by and large produces images that are rich and pack in bags of detail.

The three cameras allows for a lot of versatility for composing shots, as long as you reconcile yourself with the fact that the wide-angle and telephoto shots are going to be lacking in quality compared to the main sensor.

There are a couple more downsides. The color science and calibration is different on each of the three cameras, which renders images looking like they were shot by different cameras.

Low light images took a terrible amount of time getting the autofocus to lock and sometimes didn’t lock altogether (see Batman photos), but since this isn’t something we’ve seen in the OnePlus 7 or the Pro, this could be something OnePlus could address with a software fix.

I’ve said this previously, but few phones can touch the snappiness and fluidity of OnePlus devices, and shipping with the 15% boost to graphics performance has only boosted the performance figures we’ve seen on the 855-sporting OnePlus 7 and OnePlus 7 Pro.

Expectedly, PUBG and Asphalt 9 ran smoothly at the highest settings with no sign of lag or stutter. Using the 7T is a joy, no less. Rounding out the performance tuned package is the faster UFS 3.0 storage, which we’d advise you pick up all 256GB of during purchase for added two grand, since there is no microSD card expansion on the 7T. A minor upgrade which has a significant impact on daily use is that the OnePlus 7T finally has the same high-quality vibration motor that we loved on the 7 Pro.

Few phones can touch the snappiness and fluidity of OnePlus devices, and shipping with the 15% boost to graphics performance has only improved the performance figures we’ve seen on the 855-sporting OnePlus 7 and OnePlus 7 Pro.

Expectedly, PUBG and Asphalt 9 ran smoothly at the highest settings with no sign of lag or stutter. Using the OnePlus 7T is a joy, no less. Rounding out the performance tuned package is the faster UFS 3.0 storage, which we’d advise you pick up all 256GB of during purchase for added two grand, since there is no microSD card expansion on the 7T. A minor upgrade which has a significant impact on daily use is that the OnePlus 7T finally has the same high-quality vibration motor that we loved on the 7 Pro.

Beating the upcoming Pixel 4 as the first phone with Android 10 out of the box must have given the folks at OnePlus a sense of satisfaction, and OxygenOS on top of stock Android continues to be an exercise in restraint, one that many OEMs can certainly learn from.

There were a few bugs and app crashes which can be attributed to the pre-release software on the test unit. OnePlus has confirmed all retail units will ship with an updated version of software which should fix these niggling issues.

The OnePlus 7T ships with support for the Warp Charge 30T standard, which takes the phone from empty to nearly 70% in half an hour flat, with the remainder trickling in over the next 45-50 minutes. In our week of usage, we got just past six hours of screen-on time, which isn’t bad at all with the power-hungry 90Hz display.

The OnePlus 7T takes inspiration from the OnePlus 7 Pro and applies it to the tried-and-tested OnePlus 7 formula, and the result is a solid update that you really can’t go wrong with.

Interestingly, the OnePlus 7T is priced right up alongside the Asus ROG Phone II, which packs in a Snappdragon 855+ processor, 8GB/128GB of memory and storage and a 120Hz display!

The Asus is an out-and-out gaming phone, a hulking mass of glass and metal, and what it lacks in form factor (intentionally so, for the gaming market), it more than makes up with a gargantuan 6000mAh battery, gaming triggers and cooling vents and all manners of hardware add-ons, including a big ecosystem of gaming accessories. If you’re heavily into mobile gaming, pick up the ROG Phone II. Everyone else can head in OnePlus’ direction without a sliver of regret.