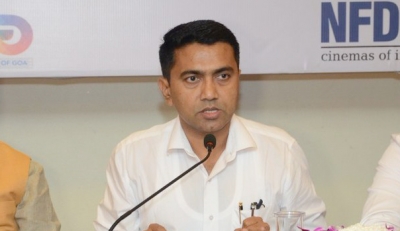 Panaji, Sep 25 (IANS) The Goa Chief Minister’s Office on Wednesday said there was a concerted attempt to “defame” the BJP-led coalition government headed by Pramod Sawant with the use of technology and fake identities.

In a statement, the CMO also urged for help from the media to track down the “miscreants”.

“It has been noticed in recent times that a certain section which is motivated to defame the current government under the leadership of Dr. Pramod Sawant in every manner possible. The current government enjoys an unprecedented majority in the Assembly and the Cabinet too is functioning in a synchronized manner,” the CMO statement said.

“This defamation exercise is happening in an organized manner by misuse of technology and by faking the identity of persons, entities and also that of media houses. Such tactics are precisely aimed at creating confusion and panic in the society at large,” the statement also added, rubbishing reports on social media about an impending Cabinet reshuffle.

Sawant took over as Chief Minister in March this year, after the death of then Chief Minister Manohar Parrikar. His sudden ascent and the subsequent sidelining of officials and politicians close to Parrikar in the Sawant regime has triggered considerable dissent within a section of the state BJP.