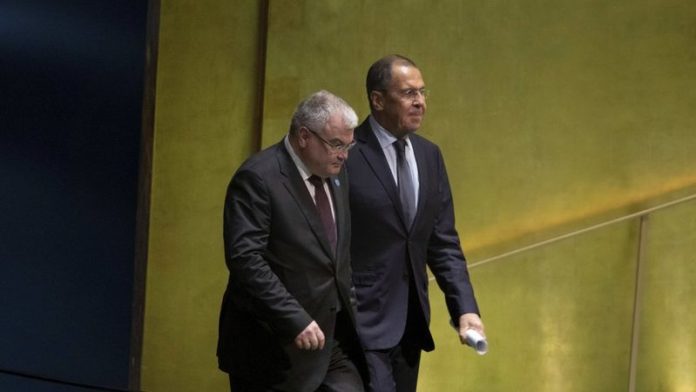 Russia’s foreign minister took aim at the West on Friday, saying its philosophies are out of step with the times and that it is struggling to accept what he called its diminishing dominance in world affairs.

In his speech before the U.N. General Assembly, Sergei Lavrov blamed the countries that declared themselves winners of the Cold War between the U.S. and the former Soviet Union for the current challenges facing the world, and for the increasing fragmentation of the international community.

He pointedly scorned much of the “West,” a term Russian officials typically use to refer to the United States and its traditional allies in Europe. He accused them of manipulating their citizens, disseminating false information, and preventing journalists from doing their work — all charges that the West has long lobbed at the Russian government and its predecessor, the Soviet Union.

“It is hard for the West to accept seeing its centuries-long dominance in world affairs diminishing,” Lavrov said. “Leading Western countries are trying to impede the development of the polycentric world, to recover their privileged positions, to impose standards of conduct based on the narrow Western interpretation of liberalism on others.”

The relationship between Russia and the U.S. has been deteriorating for years. The two countries are at odds on many issues internationally, from Iran’s nuclear program to Russia’s annexation of Ukraine’s Crimea to the war in Syria. Relations frayed even further amid U.S. allegations that Russia interfered in the 2016 U.S. presidential election.

At a news conference after his speech, Lavrov called the current dispute over the phone call between President Donald Trump and Ukraine’s President Volodymyr Zelenskiy “overblown,” and strongly denied U.S. House Speaker Nancy Pelosi’s claim that Russia is involved.

Trump’s phone call withr Zelenskiy, in which the American president is alleged to have sought help from Ukraine to win next year’s election, is at the center of a House impeachment probe.

Lavrov’s comments came in response to an interview Pelosi gave earlier Friday on MSNBC’s Morning Joe show in which she said, without elaborating, that “I think Russia has a hand in this, by the way.”

Lavrov, responding to a question on whether conversations between Trump and Russian President Vladimir Putin should be released, quoted his own mother who told him as a boy that reading other people’s letters is “indecent.”

He said diplomatic contacts are supposed to have “a certain level of confidentiality,” and asked: “How can you work in such conditions” if communications are released?

Lavrov held wide-ranging talks with U.S. Secretary of State Mike Pompeo before his speech and said he proposed additional channels of cooperation including between U.S. and Russian businessmen and entrepreneurs, and establishing “an expert council of outstanding statesmen, former military and diplomats and intelligence services.”

The Russian minister said he also proposed a missile moratorium and action on other arms control issues. And he warned that “the United States is setting course for transforming cyberspace and outer space into an arena for military confrontation.”

Lavrov accused the West of maintaining a double standard: promoting liberal values where they’re convenient but discarding them when they’re not. “When it is advantageous, the right of the peoples to self-determination has significance. And when it is not, it is declared ‘illegal’,” he said.

To maintain this double standard, Western nations manipulate their citizens and media, he said — and “impede the development of the polycentric world.”

Turning to global crises, Lavrov criticized NATO’s decision to attack Libya, which he said split the country apart. He said the West “has its own rules in the Balkans” as well. And under Western intervention, he said, Venezuela’s “statehood was destroyed before our eyes.”

Lavrov said the Americans view all aspects of the Middle East and North Africa through an “Iranian prism, as if they’re consciously trying to find more reasons in order to try to support their hard-to-support statements saying Iran is the main source of evil in that region, and all bad things come from Iran.”

Russia has proposed an initiative for collective security cooperation in the Persian Gulf, which he called “over-ripened now.”

But he said more and more countries in the region are starting to think about how to de-escalate the situation.

“That speaks in favor of the ideas that we are promoting,” Lavrov said. “They’ll be in demand. They are very simple, to sit down at the negotiating table and start speaking to each other without using the mouthpieces of mass media.”