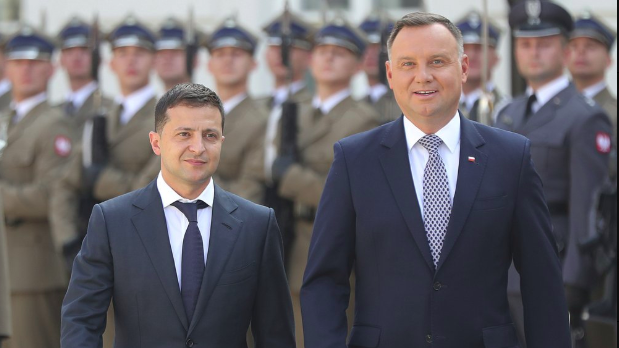 WARSAW, Poland (AP) — Ukrainian President Volodymyr Zelenskiy said Saturday he and Poland’s president have agreed that sanctions ought to continue against Russia until Ukraine regains the territory it lost in Moscow’s 2014 annexation of Crimea.

Zelenskiy, accompanied by some members of his Cabinet, was on his first visit to Poland as president for political talks and to attend ceremonies planned for Sunday to mark the 80th anniversary of the start of World War II.

He said he and Polish President Andrzej Duda had discussed the next steps needed to end the war in eastern Ukraine and to return the Crimean Peninsula to Ukraine.

“We have agreed on our next steps to stop the war in eastern Ukraine and to bring back occupied Crimea,” said Zelenskiy, who was a comedian who starred on a popular sitcom before his election in April.

Russia annexed Crimea in 2014 in a move that Ukraine and almost all of the world views as illegal. The European Union and the U.S. imposed sanctions.

In eastern Ukraine, a deadly conflict between government forces and Russia-backed separatists has gone on for five years.

Zelenskiy said his and Duda’s “joint and principal position” is that the EU “sanctions should be reviewed only to be increased- not otherwise” unless existing peace agreements are fully implemented and “the territorial unity of Ukraine according to its internationally agreed borders” is restored.

Duda said he assured Zelenskiy of his support for continuing sanctions on Russia and protecting “Ukraine’s sovereignty, independence and territorial integrity.”

Duda said especially in the context of Sunday’s World War II anniversary, “We must stress how very important it is that no one, in Europa or in the world, is allowed to change borders by force.”

Poland remained under Nazi German occupation for more than five years and lost some 6 million citizens.