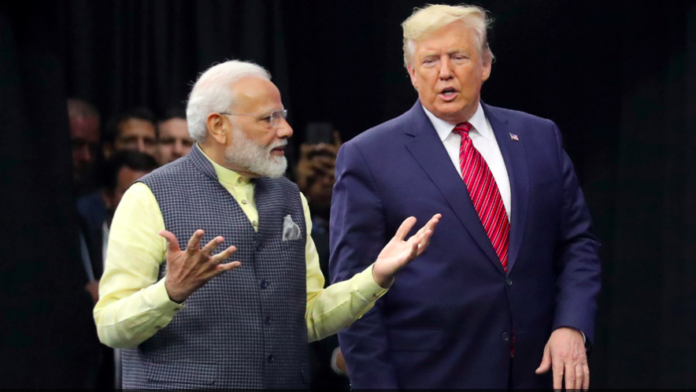 Houston: With US President Donald Trump listening keenly, Prime Minister Narendra Modi on Sunday said India had bid “farewell” to Article 370 that went against people-centric development in Jammu and Kashmir and attacked Pakistan for making hatred towards India the hub of its governance and for fostering terrorism.

Ahead of Pakistan Prime Minister Imran Khan’s meeting with President Trump likely on Monday, Modi said that India’s neighbour is the breeding ground of terrorism, from 9/11 attacks in the US and the 26/11 Mumbai attacks and the entire world is aware about the source of the terror.

“What India has done (revoking Article 370), there are some people who have trouble over it, they are themselves unable to even take care of their own country,” he said, targeting Pakistan that has been attacking India over revocation of special status to Kashmir.

“They have made hatred towards India the centerpiece of their governance. They want ‘ashanti’ (disturbance). ‘Woh aatank to paltey hain, postey hain’ (they are the breeding ground of terror), the whole world knows them, 9/11 or 26/11 Mumbai attacks.

The entire audience of 50,000 stood up and applauded in unison.

Raising the issue of the revocation of Article 370, with Pakistan set to raise it in the UN General Assembly, Modi said that for the past 70 years it was proving to be a hamper to development.

“For 70 years, it was proving a big challenge that India has given a farewell to. It kept people away from the benefits of development, and from equality, and it was being used by separatists. And the Constitution that is for the rest of India is now also for Jammu and Kashmir and Ladakh. All the discrimination that women, children and Dalits were facing, has been ended.”

Modi said the legislation for the purpose was passed with two-thirds majority in both houses of Parliament, including the upper house where his government did not have majority, and the proceedings were telecast.

The standing ovation was also a move to bring home to the US President and the Congressmen the wide support that the revocation of special status in Kashmir enjoys.