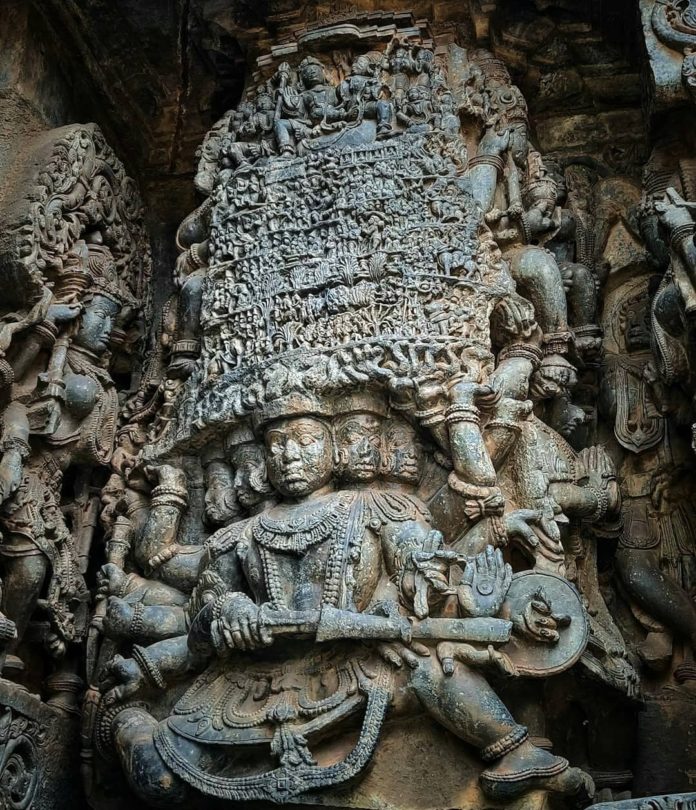 After defeating his half-brother, Kubera, and looting Kubera city, Ravana was returning back to his kingdom of Lanka.

While returning on the Pushpak Vimana (which he stole), Ravana came across a mysterious mountain which he could not fly over. Perplexed, Ravana tried many times, but failed. He then noticed a bull-shaped figure and when approached, Ravana learned that the entity was Nandi and that the mountain was none other than Kailash, home to the Lord Shiva.

On account of his recent victory, Ravana was obsessed of his power and considered himself invincible. He went on to insult Nandi and his Master, Shiva. Enraged at this arrogance, Nandi cursed Ravana that his downfall would be at the hands of monkeys. Unfazed, Ravana moved on and started lifting the entire mountain on his arms. All of this happened while the Lord was meditating; as soon as the mountain started shaking, Shiva came out of his trance.

Being the Omniscient One, Shiva realized the cause of the disturbance and at once decided to crush the arrogance of Ravana. Using His smallest toe, Shiva pressed into the mountain and the entire Kailash fell on the poor king who foolishly tried to lift it.

Ravana roared with pain and his arrogance was crushed to bits. While crying in pain, Ravana cut off one of his heads and built a veena from it and used his tendons, veins and intestines for the strings of the veena and began singing the Shiva Tandava Stotram in praise of Nataraja. Easily pleased, the Lord came down and blessed Ravana. Ravanahatha – ravana hasta veena.

It is from this incident that Dashanana got his name as Ravana – the one who cried. Shiva also gave Ravana a special weapon, Chandrahaas, or a sickle as a reward from his devotion.

The Ramayana states that the instrument was first created as a result of an unpleasant experience faced by the Demon King.

It is said that Ravana’s mother, Kaikasi, was devoted to the God Shiva, and she was eager to go and live in the god’s abode on Mount Kailash in the Himalayas. Ravana was against this idea, but in order to please his mother, he promised to bring Mount Kailash itself to his Kingdom of Hela. The story goes on to say that Shiva, in outrage, trapped Ravana’s ten heads and twenty arms as he was lifting the mountain. Ravana prayed for mercy and when Shiva released him, he decided to sing his praise and made an accompanying musical instrument using one of his heads, an arm and some of his hair. Moved by Ravana’s music, Shiva is said to have bestowed immortality on him.

The Ramayana also mentions that after the war between Rama and Ravana, Hanuman returned to the kingdom of Ayodhya with the ravanahatha.

Ravana is known as the composer of Shiva Tandava 🔱