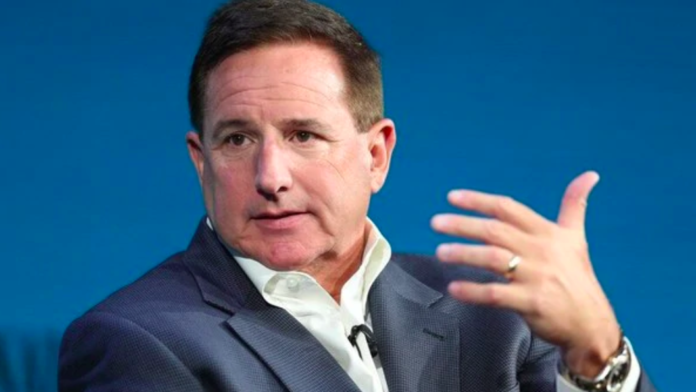 Oracle Corp. said Chief Executive Officer Mark Hurd is taking a leave of absence for unspecified health-related reasons, disclosing the move along with quarterly earnings on Wednesday afternoon. The software company made the announcement a day earlier than the results were scheduled to be released, after Bloomberg News contacted Oracle in relation to a story about the executive’s health.

The company grappled for more than a year with one of the most harrowing dilemmas a corporation can face: when – and whether – to disclose a serious illness that has befallen a senior executive.

Hurd, one of the company’s two CEOs, is struggling with an illness that has occasionally taken him in and out of the public eye for more than a year, according to several people with knowledge of the matter. Management’s rationale for staying silent until now centered at least in part on the depth of Oracle’s leadership bench, said the people, who requested anonymity discussing an issue the company considers private.

Hurd, 62, shares the CEO title with Safra Catz, 57, a well-regarded 20-year company veteran, who previously served as finance chief and still oversees Oracle’s accounting, operations, legal and corporate development. Larry Ellison, the company’s septuagenarian co-founder, handed over the CEO reins five years ago, but has never strayed far from the helm. He chairs the board, orchestrates management changes and remains deeply involved in product oversight through his role as chief technology officer. Catz and Ellison will assume Hurd’s responsibilities during his leave of absence.

Even so, Hurd’s well-being is hardly inconsequential to Oracle’s business. The usually outgoing executive oversees sales, regularly meeting with big corporate customers who spend tens of millions of dollars on Oracle’s collection of software programs. Of the three top executives, he’s also the most media-friendly, frequently outlining the company’s vision in meetings with the press and on television.

But over the past year and a half, Hurd has curtailed public appearances and the company has taken pains to squelch discussion of his health. Late last year, Oracle downsized his responsibilities, placing most of the marketing team under Ellison, people familiar with the matter said. Bloomberg News initially contacted Oracle concerning this story on Tuesday. The company declined to comment or make any executives available. It made the announcement Wednesday, with no warning, along with first-quarter earnings, which were scheduled to be released Thursday afternoon.

Securities law can be unclear about when a company is obligated to disclose a CEO’s ill health, allowing some to hold out as long as possible, while others have erred on the side of speaking out early. The U.S. Securities and Exchange Commission hasn’t settled the question, but in general says shareholders should be told about “material” matters, defined as issues on which “there is a substantial likelihood that a reasonable person would consider it important.” The U.S. Supreme Court set a similar standard in a 1988 decision.

Apple Inc. gave scant and often delayed details on the cancer that took the life of its co-founder and former CEO, Steve Jobs, in 2011. More recently, some companies have been quicker to tell investors and the public about executive illnesses. That was the case with banking leaders Jamie Dimon, of JPMorgan Chase & Co., and Lloyd Blankfein, of Goldman Sachs Group Inc., who were both treated for cancer while serving as CEO.

“The default position for a company whenever any senior executive is facing health issues should be to disclose, because it is something investors need to know when they assess a company,” said Stephen Davis, associate director of Harvard Law School’s program on corporate governance. “It may not be an issue if there’s a strong board, a strong succession plan, and strong investor confidence in the company. But when it’s a company such as Oracle where you really have a long history of shareholders not having confidence in issues around executive pay, for instance, it’s that much more important for them to know what’s going on.”

Hurd and Catz have been navigating Oracle through a critical time, with sales growing modestly since they became CEOs in 2014 and still hovering at just under $40 billion a year. Oracle has been blindsided by the success of cloud software entrants like Amazon.com Inc., and has been racing to catch up and woo new customers. For more than a year, Oracle has conducted layoffs and reorganizations in various business units. On Wednesday, the company reported that fiscal first-quarter revenue was little changed, trailing analysts’ projections.

Oracle’s financial performance has been mixed in the past two years. Sales have been choppy, with applications revenue gaining, server-computer sales falling and lucrative maintenance fees stagnant. Still, the shares have climbed more than 24% since the start of the year on optimism that Oracle’s cloud-based programs have started driving overall growth. Some investors say they’re confident in senior management despite some speculation over the last year that Hurd was unwell. C.T. Fitzpatrick, the founder of Oracle investor Vulcan Value Partners, described Hurd’s health as a “non-issue” and said the CEO seemed fine when on stage last year. “There’s a deep bench there and a lot of talent in that organization,” Fitzpatrick said. “I think that Safra in her own right has a lot of bandwidth.”

At Oracle’s headquarters south of San Francisco in Redwood City, California, Hurd’s illness has been a topic of quiet discussion among employees for at least a year and a half. There have been periods over the past two years when he has missed many meetings and become a rare sight on campus, including about a month of canceled appointments and appearances in spring 2018, people familiar with the matter said. He has also been missing from headquarters recently, separate people said.

The company and Hurd’s representatives have given various explanations for his absences. In spring 2018, Hurd was traveling to New York on a private plane when he started feeling ill. The jet turned around and Hurd canceled his appearance at a Bloomberg Live event. Oracle said the executive had a stomach-related illness. When she was Oracle’s chief marketing officer, Judy Sim gave employees a variety of reasons for why the CEO missed events or appeared to be ill. Sim, who is now Hurd’s chief of staff, has said that he was battling the flu and on separate occasions that a hernia was responsible for his changing appearance, including weight loss and hair that appeared to be a toupee, people familiar with the matter said. At one stage in 2018, a person close to Hurd said he was suffering from a blood-related ailment.

There have also been rumblings about Hurd’s condition among the financial analysts who study Oracle on behalf of clients. Their opinions vary, from viewing his health as a private matter to wanting Oracle to be more forthcoming. “People would like to know. Sometimes more information is good,” Jack Andrews, an analyst at Needham & Co., said in an interview. “The lack of transparency and clarity is a cultural thing at Oracle probably set at the top by Larry Ellison. Would it be nice to have that clarity? Yes.” At the same time, Andrews sees Hurd as less “integral” to Oracle’s fortunes than Ellison or Catz.

Though Ellison, 75, shifted some of Hurd’s responsibilities in the past year, Hurd had retained management of Oracle’s sales organization, industry-based software groups, one marketing team with a narrow product focus, press relations and investor relations, people familiar with the matter said. It’s not clear what role, if any, Hurd’s health played in the decision to shuffle oversight of marketing, and Ellison asserted control over that group at a time when he thought his company’s brand image had languished, the people said. Another person said the changes were unrelated to Hurd’s health. Ellison tasked his chief of staff, Mamei Sun, with a skunkworks project on how to rebrand Oracle in the summer of last year, people familiar with the matter said. Early this year, he formally appointed Sun to take over branding. He also hired Rupal Shah Hollenbeck, a former sales and marketing executive at Intel Corp., to bring a new perspective to the marketing team, the people said.

Hollenbeck and Sun report directly to Ellison. All of Oracle’s top executives still have to go to the chairman to make major decisions, so Ellison remains an irreplaceable force at the software maker – the tiebreaker, the kingmaker, the company’s living charter.

While some of Hurd’s responsibilities had been reassigned, Oracle has taken steps that effectively would protect his image inside and outside the company. The software maker recently required executives to complete an online training that instructed them they aren’t permitted to discuss any executive or employee health matters, a person familiar with the matter said.