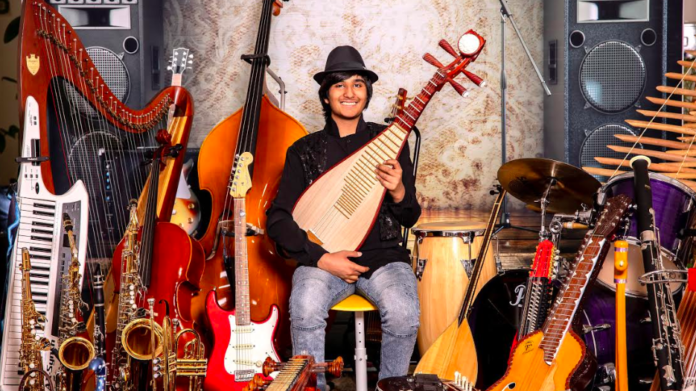 For Neil Nayyar, muses are his thing. This California Teen Has Mastered 107 Musical Instruments. His life revolves around melody. The 13-year-old has 107 sound machines in his repertoire. It all happens with eight hours of practice a day, two more than what his home school schedule included back in 2017. He does research to figure out what he should learn next.

The internet is an integral part of 12-year-old Neil Nayyar’s life. He spends several hours online. But he uses every minute of it wisely. Nayyar is not your average 12-year-old. The Elk Grove, California resident is a music prodigy who can play 44 musical instruments. Nayyar, who had his first music lesson when he was five, takes regular online classes from top musicians from countries including India, China and Italy.

Neil is an inspiration for the current generation.

His supportive parents are his biggest inspiration. The seed of music in Neil was planted when he was still in his mothers’ womb. His parents loved music. They heard Mozart Classics when Neil was young, and that’s where his journey began.

His infatuation with music didn’t surface until he was around 5 years old. His natural talent, and his ambition to learn and understand got him closer to youtube. He also received training from around 25 music professionals both locally and internationally. He felt self-motivation due to ambitious inclination, and that brought his love story with music to it’s greatest heights.

He now holds an Assist Foundation’s Prestigious World Record for playing numerous instruments all around the planet.

He has also been featured on Fox40, ABC10 and Good Day Sacramento in California. His passion for music is not just one art where Neil is inclined. He is also a keen painter, with a 100+ Water Colour and Oil Paintings.

He has already been signed to a contract with an Acting Agency in Los Angeles. It’s certainly a forward step to what his career in the future would look like, and many documents/monologues are currently finding their way to the agency. Once all the necessary formalities are completed and approved, Neil will be sent out auditioning for commercials, TV shows and even movies. He has already auditioned for America’s Got Talent and the Steve Harvey Show, and his popularity is seemingly increasing along with his abilities and skills. Practicing for almost eight hours every day, he has placed a never-ending curve in learning of the musical craft. It’s his passion, and his dedication is apparent to a lot of people at this moment, most notably all his 25 instructors who are all training to increase his expertise and his approach.

Neil is an example of a teenagers’ self-discovery through muses.