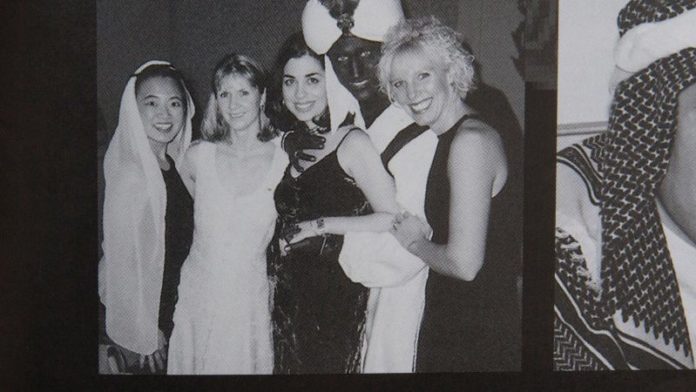 More blackface images of Canadian Prime Minister Justin Trudeau has appeared which have contributed to shattering the leaders progressive profile a month ahead of the countrys federal election.

On Wednesday, TIME magazine published a 2001 photograph in which a 29-year-old Trudeau, then a teacher at a prestigious private school in Vancouver, appeared wearing dark makeup dressed as Aladdin for an Arabian Nights-themed gala, reports Efe news.

“I shouldn”t have done it. I should have known better,” Trudeau told reporters later Wednesday.

He then also admitted to wearing make-up while in high school to sing Harry Belafonte”s “The Banana Boat Song (Day-O).”

On Thursday, a Canadian media outlet produced a third occasion that Trudeau had worn the makeup.

Global News published a video showing the now-Liberal leader in blackface raising his hands in the air while laughing and sticking his tongue out. It is unclear where or when it was shot.

The outlet said it obtained the video from a source within Trudeau”s rival Conservative Party of Canada and independently verified it with Liberal party officials.

Conservative Party leader Andrew Scheer confirmed on Thursday during a press conference that the video had been passed on from his team to the Canadian media outlet for verification.

After the new revelations, Trudeau appeared again before reporters on Thursday and was unable to guarantee that the three occasions now known are the only ones in which he dressed up as a person of colour.

Asked how he could not remember the occasions when he wore blackface, Trudeau said that “the fact is I didn”t understand how hurtful this is for people who live with discrimination every single day”.

“What I did hurt people who shouldn”t have to face intolerance and discrimination because of their identity. This is something that I deeply, deeply regret,” he said.

“Darkening your face, regardless of the context or the circumstances, is always unacceptable because of the racist history of blackface. I should”ve understood that then and I never should have done it,” he added.

The emergence of the images has plunged Trudeau”s campaign ahead of the October 21 federal elections into chaos.

The campaign had already begun with the Liberals” publication of videos denouncing Scheer and several conservative candidates as intolerant politicians opposed to the rights of gay people and racial minorities.

In July 2018, an opinion article from 2000 came to light in which a journalist reported that Trudeau, then a 28-year-old teacher, had touched her inappropriately.

After the reappearance of the article, Trudeau said that he had not acted inappropriately, but that he had apologized to the journalist anyway.

Perhaps what had so far most damaged the image of Trudeau, who positioned himself as a feminist and champion of a diverse and inclusive society, was the scandal surrounding his former justice minister and attorney general, Jody Wilson-Raybould.

Wilson-Raybould, a woman of indigenous origin, was replaced after she refused to grant favorable treatment to the country”s largest construction company, SNC-Lavalin, as Trudeau reportedly wanted.