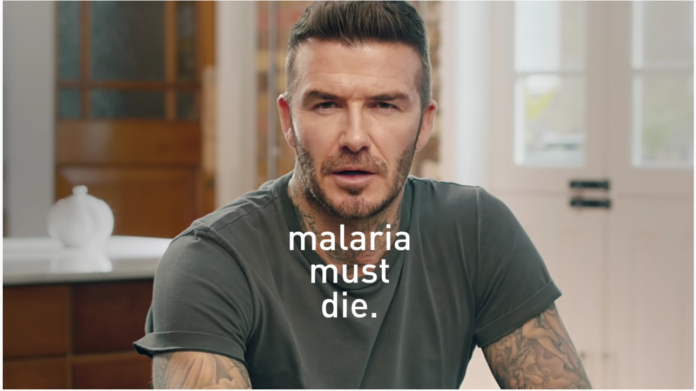 Today the campaign ‘Malaria Must Die, So Millions Can live’, launched a digital and out of home advertising activation to inspire people to join the world’s first voice petition to end malaria. The campaign will activate online and on out of home displays and billboards across New York City during the annual United Nations General Assembly (UNGA) meeting 23-27 September.

Today, the campaign is calling on more supporters to add their voices to the petition via the world’s first malaria AR (augmented reality) filter. Developed pro-bono by Facebook and Powster (award-winning interactive creative studio and production company), the filter is available on Facebook and Instagram‘[VG2] .

The filter simulates a swarm of deadly mosquitoes around the user’s head, which only dissipate when the user ‘speaks up,’ reinforcing the message that malaria declines with increased action, but can return with a vengeance when the fight is deprioritised.

“We’re extremely proud to have the opportunity to support such an important campaign,” said Abi Smith, Creative Director of POWSTER. “Working with Spark AR and Quividi provides a fantastic platform for us to innovate and share the message to ‘Speak Up’ with audiences on and offline in a way that is both playful and meaningful. It’s exciting to employ our technical expertise to create a really cutting-edge experience that will capture attention and help amplify the Malaria Must Die message around the world.”

A life-size version of the filter will be placed at key locations across New York City, including Hudson Yards and Westfield World Trade Center, using Quividi powered out of home advertising display boards. Additionally, over 2,000 digital out of home billboards placed around New York City will feature David Beckham surrounded by thousands of mosquitoes.

The voices collected via the voice petition will be turned into a unique soundscape intended to grab the attention of leaders ahead of The Global Fund to Fight AIDS, Tuberculosis and Malaria replenishment meeting on 10 October in Lyon. The Global Fund is dedicated to help save 16 million lives by ending the world’s three biggest preventable killer diseases – AIDS, Tuberculosis and Malaria – and seeks to raise at least US$14 billion during the next three years from donor governments, implementing countries and the private sector.

The gathering of world leaders at UNGA this week marks the start of a critical decade of delivery and action on the Sustainable Development Goals (SDGs). In the fight against malaria, the UNGA represents an important moment to call for more progress towards achieving Sustainable Development Goal (SDG) 3 – to ensure healthy lives and promote wellbeing for all at all ages – as well as accelerating progress against multiple other SDGs and achieving Universal Health Coverage (UHC).

James Whiting, CEO of Malaria No More UK says: “It’s important to find new ways to amplify the voices of those affected by malaria and give everyone the opportunity to speak out and call for more action to end this preventable disease. Malaria is the world’s oldest and deadliest disease and is still claiming the life of a child every two minutes. We want to grab the attention of world leaders and to demonstrate that people around the world have demanded an end to malaria in this generation,” explains James Whiting, CEO of Malaria No More UK, the charity convening the Malaria Must Die campaign.

In November 2017, the WHO World Malaria Report revealed that for the first time in a decade cases and deaths were beginning to increase and progress fighting the disease was stalling. The global malaria community came together and launched the Malaria Must Die campaign, fronted by David Beckham, in February 2018.

On 8 September 2019, the Lancet Commission on malaria eradication published a new report, authored by 41 of the world’s leading malariologists, biomedical scientists, economists, and health policy experts, that said that malaria can and should be eradicated within a generation.

James Whiting continues: “The ‘Malaria Must Die, So Millions Can Live’ campaign is part of the global drive to see progress accelerate. With the right leadership, tools and funding, we can be the generation that ends this killer disease for good”.

The bespoke AR filter is available on Facebook and Instagram in the camera feature of the app and can also be found at stopthe.buzz/ig and stopthe.buzz/fb[VG3]

The filter was developed, pro-bono, by interactive creative studio, Powster in partnership with Facebook.

The digital out of home (DOOH) activation [VG4]

The interactive software that has enabled a life-size version of the filter to be placed on DOOH displays in key locations across New York City was developed by Quividi. Quividi have also secured pro-bono DOOH advertising space for the campaign in over 2,000 locations across New York. These spaces have been provided by: Captive, Clear Channel, Elan, Gable, Grandi Stazioni, Imedia Center, Intersection, Lightbox, Ooh!Media, Outfront, Overland Entertainment (Hudson Yards in association with SAP and Related), Pikasso, Primedia and Westfield.

About Malaria Must Die, So Millions Can Live:

Malaria Must Die is a global campaign backed by a wide coalition of organisations and celebrities who are calling upon leaders to prioritise the fight against malaria, or risk undoing decades of unprecedented progress. It aims to inspire support and build a strong mandate for bold political action to end malaria for good. Malaria No More UK is convening the campaign on behalf of the global malaria community.

The Voice Petition is the call to action for the next phase of the Malaria Must Die campaign, launched by Malaria No More UK in February 2018 in the run up to the London Malaria Summit held alongside the Commonwealth Heads of Government Meeting (CHOGM) in April 2018. The Malaria Summit featured commitments worth over $4.1bn to fight malaria and was followed by a historic CHOGM commitment to halve malaria across the Commonwealth by 2023.