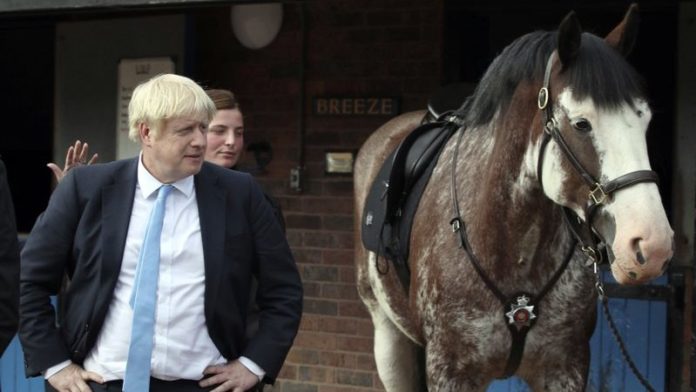 LONDON (AP) — Boxed in by opponents and abandoned politically even by his own brother, British Prime Minister Boris Johnson struggled Thursday to keep his Brexit plans on track, and he accused lawmakers of thwarting democracy by blocking his call for a new election.

Johnson remained determined to secure an election after lawmakers rejected his attempt to trigger a snap poll, and moved to stop the U.K. leaving the European Union next month without a divorce deal. House of Commons leader Jacob Rees-Mogg told Parliament that a vote would be held Monday on a new motion calling for an election in October.

It’s uncertain whether it will pass, with opposition parties divided over whether to agree to an election now.

Johnson said he would “rather be dead in a ditch” than delay Brexit any further, and insisted that whether or not Britain left the EU as planned on Oct. 31 must be “a matter for the people of this country to decide.”

“I don’t want an election at all, but frankly I cannot see any other way,” he said, flanked by cadets at a police academy on what felt very much like an election campaign stop.

Earlier, he called the rejection of a snap election “a cowardly insult to democracy.”

Johnson’s determination to lead Britain out of the EU on Oct. 31 faces strong opposition from lawmakers, including members of his own Conservative Party who oppose a no-deal Brexit.

His brother, Jo Johnson, dramatically quit the government Thursday, saying he could no longer endure the conflict “between family loyalty and the national interest.”

Jo Johnson was an education minister in his older brother’s government, despite his opposition to leaving the EU without a divorce deal. He said he would also step down from Parliament, the latest in a series of resignations by Conservative moderates opposed to the government’s hard-line Brexit stance.

Boris Johnson became prime minister in July after promising Conservatives that he would complete Brexit and break the impasse that has paralyzed Britain’s politics since voters decided in June 2016 to leave the bloc and which brought down his predecessor, Theresa May.

After only six weeks in office, however, his plans to lead the U.K. out of the EU are in crisis. He is caught between the EU, which refuses to renegotiate the deal it struck with May, and a majority of British lawmakers opposed to leaving without an agreement. Most economists say a no-deal Brexit would cause severe economic disruption and plunge the U.K. into recession.

Johnson’s solution is to seek an election that could shake up Parliament and produce a less troublesome crop of lawmakers. It’s a risky gambit: Opinion polls don’t point to a clear majority for the Conservatives and the public mood is volatile.

British prime ministers used to be able to call elections at will, but under 2011 legislation fixing elections at five-year intervals, they now need the support of two-thirds of lawmakers in Parliament to hold an early poll.

On Wednesday, Johnson asked Parliament to back an Oct. 15 election — but Parliament said no, with opposition parties either voting against him or abstaining.

Corbyn said Labour, the biggest opposition party, would only vote for an early election if the prospect of a no-deal Brexit was taken off the table.

Labour economy spokesman John McDonnell said the party wanted an election but was still deciding on whether to seek one before the Oct. 31 Brexit deadline, or to wait until Parliament had secured a delay to Britain’s departure from the bloc.

“The problem that we have got is that we cannot at the moment have any confidence in Boris Johnson abiding by any commitment or deal that we could construct,” he told the BBC. “That’s the truth of it. So, we are now consulting about whether it’s better to go long, therefore, rather than to go short.”

Opposition lawmakers, supported by Conservative Party rebels, are close to passing a bill that would block a no-deal Brexit on Oct. 31, compelling the prime minister to seek a three-month delay to Britain’s departure if no agreement is reached by late October.

The bill was approved by the House of Commons on Wednesday, but faced trouble in Parliament’s upper chamber, the House of Lords, where pro-Brexit members planned to defeat it by filibustering — talking until time ran out.

But early Thursday, the Lords agreed to let the bill pass through the chamber by Friday, allowing it to become law on Monday.

Johnson said the legislation would “scupper our negotiating power and make it much more difficult for the government to get a deal.”

Johnson plans to suspend Parliament at some point next week until Oct. 14, a decision that enraged opponents of Brexit and faces several legal challenges. His critics accused him of subverting democracy and carrying out a “coup.”

Transparency campaigner Gina Miller, who won a 2017 Supreme Court ruling that stopped the government from triggering the countdown to Brexit without a vote in Parliament, took the government to the High Court on Thursday over the suspension.

Miller, who is supported in her claim by Labour and the governments of Scotland and Wales, argues that sending lawmakers home at a crucial time is unlawful.

“We say that what the prime minister is not entitled to do is to close Parliament for five weeks at such a critical time without justification,” her lawyer, David Pannick, told the hearing.

The case continues Friday, when judges may give their ruling.

Johnson insists he wants to secure a revised divorce deal to replace the agreement May struck with the bloc, which was rejected three times by British lawmakers. He told Parliament this week there was “real momentum” in negotiations with the EU, but European officials deny this and say Britain has yet to produce any concrete proposals.

Pro-Brexit British politicians want a looser economic relationship with the EU than foreseen under May’s deal, to make it easier to strike new trade pacts with other countries, notably the United States.

U.S. Vice President Mike Pence met Johnson in London on Thursday and later tweeted: “As the deadline for Brexit approaches, we urge the European Union to negotiate in good faith with Prime Minister @BorisJohnson and work to reach an agreement that respects the United Kingdom’s sovereignty and minimizes disruption to commerce.”

That comment is likely to please the British government but annoy EU officials and pro-EU Britons.

At the meeting, Pence said Washington “is ready, willing and able to immediately negotiate a free trade agreement with the U.K.”

But anti-Brexit U.K. politicians fear the Trump administration will demand access to Britain’s state-funded National Health Service as part of any deal.

Johnson told Pence “we will do everything to increase free trade, but the National Health Service is not on the table as far as our negotiations go.”

“And we’re not too keen on that chlorinated chicken either,” he said — a reference to concerns that Britain will have to lower animal hygiene standards as part of a trade deal.