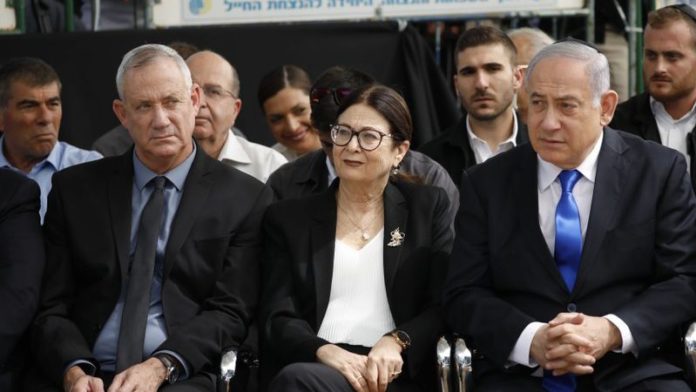 JERUSALEM (AP) — Israel’s two largest parties met Tuesday to discuss the possibility of forming a coalition government, in a long-shot effort to solve the political paralysis that has emerged from last week’s deadlocked national elections.

The meeting between party representatives comes a day after Blue and White leader Benny Gantz and Prime Minister Benjamin Netanyahu of the rival Likud party held their first working meeting since the vote. Israeli President Reuven Rivlin brought them together in hopes of breaking an impasse that could send the nation into months of political limbo and potentially force a third election in less than a year.

“We took a significant step this evening, and now the main challenge is building a direct channel of communication out of trust between the two sides,” Rivlin told the two rivals. “People expect you to find a solution and to prevent further elections, even if it comes at a personal and even ideological cost.”

Israel’s president is responsible for choosing a candidate for prime minister after national elections. That task is usually a formality, but it is far more complicated this time since neither of the top two candidates can build a stable parliamentary majority on his own.

Rivlin summoned Gantz and Netanyahu for another summit Wednesday before making his decision. No breakthrough is expected, and it is unclear which way Rivlin is leaning.

Gantz’s centrist Blue and White came in first in the elections, with 33 seats, trailed by Netanyahu’s Likud with 31. With smaller allied parties, a total of 55 lawmakers have thrown their support behind Netanyahu, against 54 for Gantz, leaving both men short of the required 61-seat majority.

A unity deal between the large parties, with a rotating leadership, is seen as perhaps the only way out of the gridlock. That’s what Avigdor Lieberman, the kingmaker leader of the ultranationalist Yisrael Beitenu, party is insisting upon. Lieberman, who controls eight seats, has refused to endorse either candidate and is demanding they join him in a broad, secular unity government that excludes the ultra-Orthodox parties — Netanyahu’s long-time partners. A former aide and ally of Netanyahu, Lieberman forced the Sept. 17 repeat vote by refusing to join Netanyahu’s coalition and robbing him of his parliamentary majority.

Both Netanyahu and Gantz have expressed theoretical support for a unity deal between their parties but have deep disagreements over its agenda and who should lead it.

Gantz insists he should go first and has vowed not to partner with Likud so long as Netanyahu is at the helm, citing the prime minister’s legal predicament. Israel’s attorney general has recommended charging Netanyahu with a series of corruption-related charges and is expected to make a final decision following a hearing with the prime minister early next month.

Netanyahu, seeking protection from prosecution, believes he should remain as prime minister and has signed a deal with his smaller allies, including ultra-Orthodox parties, to negotiate as a “bloc,” further signaling that there was more jockeying than real negotiating involved in the latest developments.

“It is going to be very hard, if not downright impossible, to form a government based on the two larger parties, when one of them drags its satellite parties along with it,” wrote columnist Nahum Barnea in the Yediot Ahronot daily. “That’s like a bride who wants to bring her brother, cousin, neighbor and rabbi along with her to the consummation of her marriage. It won’t work.”