What to Expect in a Master Health Checkup? 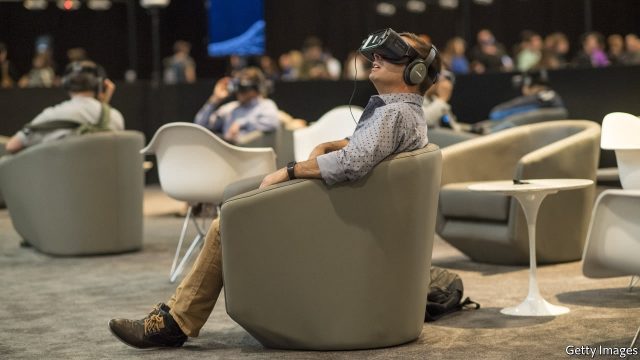 LIKE the rest of the consumer-electronics industry, video-game makers would be lost without the traditional binge buying that happens between mid-November and the late December. This year’s gift-giving season will be as much a treat for makers of video-gaming gadgets as for their happy recipients. Prices of the headsets, sensors and controllers that let game-players explore the artificial world of virtual reality (VR) have been slashed to levels most families can now afford. Stockings could be bulging with VR headsets from Samsung, Dell, Sony, HTC, Oculus (a division of Facebook) and others.

Despite the merry ho, ho, ho, however, there is a distinct whiff of urgency in the air. Virtual reality has failed to live up to its hype, and mainstream consumers never really bought into the technology. Even ardent gaming fans have been slow to embrace VR. No-one can blame them. The content has been underwhelming, and the gear needed to do the job properly has been too cumbersome and expensive. Apart from a head-mounted display, with its high-resolution OLED (organic light-emitting diode) screen, other necessary bits include a pair of handheld controllers (for signalling the user’s intentions) along with a couple of wall-mounted sensors (for tracking the user’s movement).ADVERTISING

Then there is the powerful gaming computer needed for generating the virtual 3D space. The latest versions of Microsoft Xbox or Sony PlayStation will suffice, and will certainly save a bundle if the user already owns such a video-game console. Otherwise, a PC fitted with a high-end graphics card capable of refreshing the screen at a minimum of 90 hertz (cycles per second) rather than the usual 60Hz is essential if the user is to avoid motion sickness and nausea. Adding that can double the cost of getting into VR.

The good news is that the Oculus Rift—regarded by many gamers as the best of the VR headsets—can now be had for as little as $400, including two handheld controllers and a pair of desktop tracking sensors. When launched in 2016, the headset alone cost $600 and the controllers $200 apiece. To stay competitive, Oculus VR’s main rivals have also cut prices. A comparable bundle for the HTC Vive now costs just under $600, down from $800 several months ago. Meanwhile, Sony’s PlayStation VR has fallen from $500 to $400.

That is just a start. The latest version of Microsoft’s Windows 10 software (Fall Creator’s Update) includes tools that let headset makers use the company’s “mixed reality” platform. Microsoft has teamed up with device-makers such as Acer, Asus, Dell, HP, Lenovo and Samsung to produce headsets based on its software. By not having to develop the operating software themselves, or license it from elsewhere, Microsoft’s partners are able to sell VR headsets for $300 to $400.

Not to be outdone, Oculus VR recently unveiled a standalone headset called the Oculus Go, which is expected to sell for $200 when launched next year. Facebook’s boss, Mark Zuckerberg, believes (optimistically) that virtual reality could garner a billion users over the next year or so. Meanwhile, HTC has announced a similar standalone VR headset, called Vive Focus, for the Chinese market. As yet, no mention has been made as to whether it will be sold elsewhere.

Entry-level offerings like the Oculus Go and Vive Focus are not to be confused with bargain-basement headsets such as Samsung’s Galaxy Gear VR or Google’s Cardboard and Daydream—which require a smartphone to be inserted in an otherwise empty strap-on box, to serve as screen and processor. These do-it-yourself kits can be had for anything from $15 for a cardboard cutout to $90 or so for a more substantial model. Be warned, though: their limited resolution and freedom of movement provide little more than a taste of what VR has to offer.

Headsets like the Oculus Go and Vive Focus rely on technologies developed originally for smartphones. These include system-on-a-chip processors, and also miniature gyroscopes and motion sensors. Unlike the do-it-yourself models, the components in these new standalone VR models are fully integrated into the headset. Even so, compromises have had to be made to keep them light enough for people to wear on their heads. And, while Qualcomm’s Snapdragon series of smartphone processors are impressive, they are no match, when it comes to producing fluid graphics with realistic lighting and shadows within the VR space, for the Intel or AMD powerhouses used in gaming computers .

Other cost-cutting measures hobble performance further. The forthcoming Oculus Go, for instance, relies on an inexpensive LCD panel instead of a pricier OLED display. The latter updates the image much faster, reducing the blur caused by the user’s movements. To cut costs still more, the Oculus Go will be shipped without the external sensors needed to track the user’s movements within the room—though the standalone device can at least track head movements, thanks to its internal accelerometers. It also comes with a fairly simple controller, rather than a pair of the powerful handheld “Touch” devices found in the Oculus Rift package.

For the time being, people wanting to experience virtual reality at its most immersive will have to cough up and continue to stumble over a cumbersome cable that ties them to a PC powerful enough to do all the visual computation, while minimising the effects of “latency”—ie, the lag between the user doing something and seeing the action occur in the virtual scene. Untethered headsets that offer a richly immersive experience are still a way off. Over the past year, Oculus has provided glimpses of its project Santa Cruz, a mobile VR headset that needs neither external sensors nor a tethered PC. All the company will say about when it might appear is that early units will be shipped to game developers sometime next year.

Where is Apple in all this? Practically every other smartphone maker has plunged into virtual reality, but Apple has remained aloof. Tim Cook, the company’s chief executive, says the display technology is still not good enough to provide a satisfactory VR experience. He also believes that virtual reality (even more than a mobile phone) is too isolating and anti-social.

Mr Cook’s preference is for augmented reality (AR), a technology for overlaying digital information on objects in the real-world seen via a smartphone camera or headset. Augmented reality amplifies human performance instead of isolating people, he says. Investing in AR also makes more business sense. Unlike VR, which is essentially a game-playing technology, AR has many potential uses. It is expected to make big impacts in industry, education, training, heath care and travel, as well as sports and entertainment.

Though famously tight-lipped about its product-development process, Apple is believed to have “several hundred engineers” laying the foundations for an AR ecosystem. For instance, the latest version of the company’s mobile operating system (iOS 11) includes a set of tools known as ARKit for building augmented reality applications for the iPhone and iPad. Some 1,000 or so AR applications can now be downloaded from the company’s App Store.

Over the past few years, Apple has also bought a string of startups working on AR. One of its latest is Vrvana, a Canadian headset maker it bought for $30m. Apple is expected to launch an AR headset (or spectacles) within a year or two. Rivals should worry. Apple has been late to market before, only to lay waste to the competition by delivering an exquisitely refined device.

Microsoft is clearly thinking along similar lines. Not for nothing is the toolkit released with the latest Windows 10 update referred to as its mixed-reality platform. The headsets currently being launched by Microsoft’s partners come bundled with motion controllers and work only with VR content. But the mixed-reality platform can work equally well with AR devices, including Microsoft’s own HoloLens—or, indeed, with gear capable of merging both augmented and virtual realities.

Many see the latest crop of products as VR’s last hurrah. The long-term transformative power of the technology is not in doubt. But the market has not grown anywhere near as quickly as many had hoped. Iceland-based CCP, which produced a ball-tossing game for the PlayStation VR, is one of the latest studios to scale back its investment in VR. Even Oculus has shut down its own VR studio. On the hardware side, Nokia recently announced it would cease making its line of professional VR cameras.

Today, most of the momentum (and hype) is firmly behind AR. The turning point seems to have been last year’s overnight success of Pokémon Go, a location-based AR game for iPhone and Android devices. What made this blockbuster app such a winner—and the fastest-growing game of all time—was that it brought people closer together, promoting a powerful sense of community. Most of today’s break-out technologies have done much the same, whether they were social-media innovations like Facebook, Twitter and Instagram, or mobile activities involving texting, dating or gaming. VR, on the other hand, has so far had limited success in social arenas.

Analysts covering the entertainment business have begun to notice the similarities between the recent wave of VR activity and the 3D developments that were all the rage a decade ago. In both cases, the buzz was about how the immersive technology would change viewing habits for ever. But both suffered from a dearth of compelling content. Both offered too limited a field of view. Both tended to induce nausea and headaches. And in both cases, the cost of entry was too high for the majority of people. When prices eventually were slashed, it was too late. Customers had moved on. Manufacturers stopped making 3D television sets in 2017, because of a lack of consumer interest. Industry pundits are not the only ones now wondering whether VR is about to follow 3D down the same slippery slope to irrelevance.