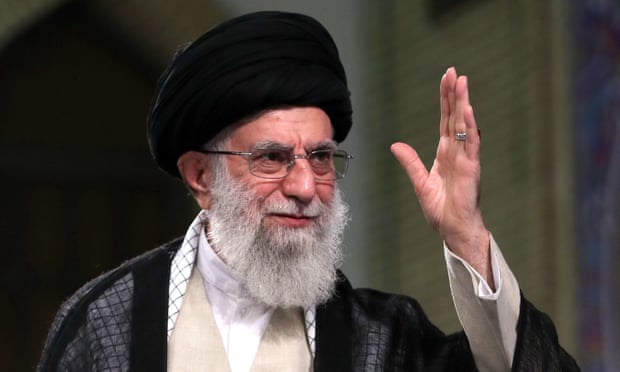 Iran’s supreme leader has announced there will be “no negotiations on any level” with US officials, in remarks aimed at dousing speculation of a possible summit between Donald Trump and Hassan Rouhani on the sidelines of the UN general assembly next week.

The departure of the US national security adviser, John Bolton, an advocate of forceful anti-Iran policies, from the White House last week, along with the scheduled arrival of the Iranian president in New York had raised the possibility of renewed high-level talks between the countries after months of escalating threats and military posturing.

On Monday, Trump appeared to leave the door open for discussion even as he hinted at military action against Iran, which members of his cabinet have blamed for the weekend’s attacks on Saudi Arabian petroleum infrastructure.

“You never know what’s going to happen,” the US president told reporters. “I know [Iran] want to make a deal … At some point it will work out.”

However, in remarks posted on his official website on Tuesday, Ayatollah Ali Khamenei, Iran’s highest authority, appeared to rule out the possibility of any meeting between Trump and Rouhani, at least in the short term.

“If America takes back its words and repents and returns to the nuclear deal, which they have violated, they can take part in the meetings of signatories to this agreement with Iran,” Khamenei said. “Otherwise, no negotiation on any level will happen between officials of the Islamic Republic and America, neither in New York nor anywhere else.”Q&A

What is the Iran nuclear deal?

Khamenei is traditionally opposed to dialogue with the US, and made regular pessimistic statements during negotiations for the 2015 global agreement to curb Iran’s nuclear programme. He came out in support of the deal once it was reached, arguing Iran had shown “heroic flexibility”.

The US pulled out of the agreement last year, with Trump arguing it was too narrowly focused on Iran’s nuclear programme and did nothing to address the country’s missile development, human rights abuses and sponsorship of militias in the Middle East.

As part of a “maximum pressure” campaign intended to bring Tehran to the table, Washington imposed harsh sanctions on Iranian exports which have choked the country’s economy, including its oil industry.

In the past four months, at least 13 oil tankers in the Gulf and the Strait of Hormuz have been seized by Iranian forces or been targeted by acts of sabotage, starting on 12 May with the appearance of large holes in the hulls of four ships docked in Fujairah, one of the United Arab Emirates. The US and Saudi Arabia have repeatedly accused Iran of perpetrating the damage. Tehran denies the allegations.

Separately, Iran’s judiciary confirmed on Tuesday that it had detained three Australians, including two with British nationality, whose arrests were made public earlier this month.

“Two of them had taken pictures in military areas and the third [was detained] for spying for a third country,” Fars quoted the judiciary spokesman Gholamhossein Esmaili as saying. “The court will decide whether this person [detained for spying] is guilty or not.”

The detainee accused of spying was identified last week as a University of Melbourne lecturer, Kylie Moore-Gilbert. The two accused of taking pictures are Jolie King and her boyfriend Mark Firkin, a travel blogging couple who are thought to have been flying a drone without authorisation.

Holly Dagres, a non-resident fellow at the Washington-based thinktank, the Atlantic Council, said Khamenei’s latest comments appeared to reinforce a hard line, but his mention of the nuclear deal did leave room for dialogue.

“It’s that Khamenei mentions returning to the [nuclear deal] which is significant, because in the past he’s been saying we won’t talk to the Americans regardless,” she said.

Iran’s actions over the past months were calculated to send Washington a clear message, she said. “They’re telling the US that if you don’t come and sit down with us, things are going to get worse.”

Trump stressed on Monday that Riyadh would have to play a leading role in any retaliatory strike against Iran, especially when it came to paying for it.

“The fact is the Saudis are going to have a lot of involvement in this, if we decide to do something,” he told reporters. “They’ll be very much involved, and that includes payment. And they understand that fully.”

The Saudi military spokesman for the Riyadh-led coalition fighting in Yemen said it was understood Iranian-made weapons had been used in the attack, but stopped short of blaming Iran.

“The investigation is continuing and all indications are that weapons used in both attacks came from Iran,” Col Turki al-Maliki told reporters in Riyadh.