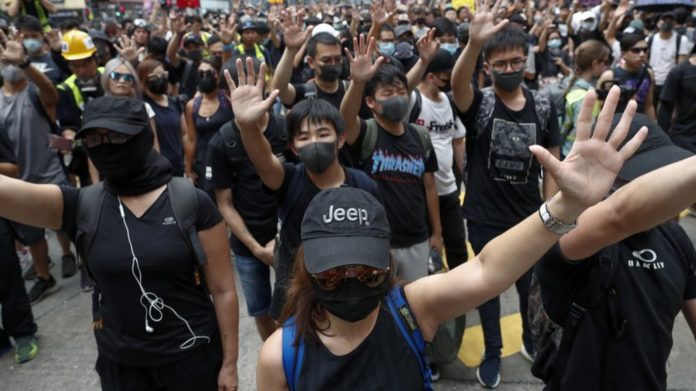 Watching from a side road, Edmund Lau was struck with admiration and wonder as young protesters dressed head-to-toe in black whirled into action to deal with another volley of tear gas from Hong Kong riot police, kicking away the smoking canisters and rushing to aid the stricken who wept uncontrollably.

“Fabulous,” the 45-year-old nurse said of the now well-oiled tactics deployed by the massed demonstrators, many of whom were 20 years his junior. “Very brave.”

With fired-up young people in Hong Kong pulling out all the stops  to spoil China’s celebrations this week to mark 70 years of Communist Party rule, older generations in the former British colony that reverted to Chinese sovereignty in 1997 are asking themselves: When we were their age, did we do enough to push for the full democracy and iron-clad liberties that legions of determined youngsters are now demanding?

Often, they answer their own question with a sheepish “No.”

“We were shameful,” Lau said. “From this generation, I’ve learned the meaning of fraternity and solidarity. Adorable.”

Support, even if just from the sidelines, that older citizens of Hong Kong are displaying for the tens of thousands of young demonstrators on the protest movement’s tear-gassed front lines is making an already complex problem for Hong Kong’s leaders only more delicate and intractable.

A further toughening-up of the police response, already widely decried as heavy-handed, to the months-long protests  could turn bystanders into more active participants. And although there are many in Hong Kong who resent the disruption to lives and businesses, the sprinkling of gray hairs amid black-clad young protesters means that the demonstrations cannot convincingly be dismissed as simply misguided youthful folly.

“This generation has helped us with our political awakening,” said Samuel Yip, a 54-year-old investment bank worker. “This political movement has really given us a Hong Kong identity.”

From his perch on an elevated side road, Yip watched in relative safety as young protesters brought usually busy business and tourist districts of central Hong Kong to a halt again Sunday, forming huge human chains along which, hand-to-hand, they passed water bottles, eye goggles, rolls of plastic film, gloves and umbrellas to comrades at the front, where the air stung with tear gas.

Another choking volley tipped Yip into a fury.

“This is worse than the triads,” he said, likening the police force to Hong Kong’s notorious criminal underworld. “With the triads, we pay protection money, but here they’re using taxpayers’ money to buy the weapons — tear gas, rubber bullets.”

Many of the protesters are too young to have solid, or even any, memories of Hong Kong under British rule. But older residents remember the 1980s, when Britain and China were negotiating the terms of the 1997 handover, and the 1990s, when the last British governor, Chris Patten, infuriated Beijing with a belated British push for fuller democracy and stronger guarantees for its civil liberties.

They also remember that there weren’t similar sustained, massive street protests like those seen week-in, week-out in recent months, and now daily leading up to Tuesday, when the Chinese Communist Party will celebrate 70 years in power. In Hong Kong, protesters say they’ll again be wearing black, in mourning this time, and their posters are calling for a “Day of Grief.”

Amid older demonstrators, admiration for the seemingly tireless zeal of young protesters is also tinged with regret that they weren’t as vocal when their futures were being negotiated. Waves of people preferred to leave before the handover, a drain of wealth and talent spurred in part by the Communist Party’s militarized crackdown on pro-democracy demonstrators in Beijing’s Tiananmen Square in 1989. Although Hong Kong’s annual candlelit vigils  to commemorate the bloodshed have long been well attended, the territory often seemed more preoccupied by the business of making money than free elections in the waning years of British rule.

“I blame myself, too. I didn’t do enough to protect Hong Kong’s freedom,” Jeremy Lin, 45, said at a large demonstration on Saturday that also ended with water-cannon sprays from police. As a teenager, he followed his parents when they emigrated to Canada but later came back to make Hong Kong his home again. At the protest, he wore a T-shirt emblazoned with “Hong Kong is home” in bold white characters.

“We could have done more,” Lin said.

Others are kicking themselves for having had rosy visions in 1997 of life in Hong Kong remaining unchanged and for believing China’s promises that the free-wheeling territory would largely be its own boss, under a formula dubbed “One country, two systems.”

Beijing’s refusal to allow full democracy and, this year, a Hong Kong government proposal that would have allowed criminal suspects to be extradited to mainland China for trials in Communist Party-controlled courts have blown away trust even among some of those who celebrated when 156 years of British rule ended with midnight’s stroke on July 1, 1997.

“We were jubilant,” she said, attending Saturday’s protest with her husband, Henry, a retired physician. “We had cocktail parties.”

Her father, a banker, fled southern China when Mao Zedong’s communists took power in 1949, finding safe haven in British-administered Hong Kong along with millions of others who came in waves, escaping subsequent decades of famine and purges.

Growing up in what she remembers as golden years for Hong Kong, Chao said she came to believe that the regime her father fled had changed and “the communists, communist China, are not the same anymore.”

“We are so dumb for not taking any lessons from our parents,” she said, watching avidly with her husband from a footbridge as thousands of young protesters yelled “Revolution now!”

“We feel sorry that we have put them in this situation, we have not done enough,” she said. “So we owe it to them to support them now. I admire them for their courage, for coming out to stand up for themselves.”