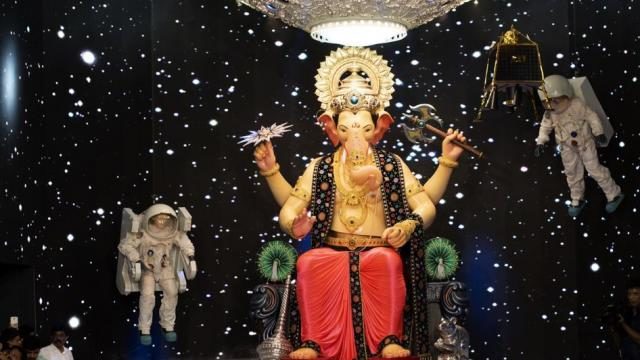 Ganesh Chturthi also known as Vinayak Chaturthi is one of the major festivals celebrated in India. The festival lasts for ten days ending on the day of Ananta Chaturdashi. This traditional birthday of Lord Ganesha has a rich history which some of us aren’t very aware of. Let us take a ride back to the history of the Ganesh Festival celebrated in India.

As per Hindu history, Lord Ganesh is the son of Parvati and Shiva. It is well known that Ganesha has an elephant head and a human body. Lord Ganesha is famous for being a trickster. His mischievous nature and profound sense of humor are very well known in the history.

The birth of Ganesha

As the history goes, there is an interesting story about the birth of Lord Ganesha. It is said that Parvati, while bathing once, created a human figure from some balm, she gave him life. This is the birth of Ganesha which is celebrated as Ganesh Chaturthi.

The wrath of Shiva

The story gets interesting from here on. After a long time of meditating on Kailash parvat, Lord Shiva decides to visit his wife. When he tries to enter the chambers, he is suddenly stopped by this young boy that was guarding the door while she bathed. In a fit of a rage, Shiva cut off his head. Just moments after that he realizes that he had just killed Parvati’s son. He immediately sends a Gana member to get the head of the first living creature that he finds facing opposite its mother. The first such creature that could be found was an elephant. Once the head was brought back to Shiva, he placed it on the body of the boy and brought him back to life. The new elephant head god, was now named the first god.

Hence, Lord Ganesha is always worshipped first before all other gods are prayed to. Ganesha is the foremost god and his birth is celebrated throughout the nation and even different parts of the world as Ganesh Chaturthi. He will forever be remembered as the brave guardian of parvati’s door who didn’t shy away even from losing his life at the commandment of his mother. Thus, Ganesh idols are kept at the entrance of houses and temples. At the beginning of any auspicious occasion such as births, marriages, etc Ganesh Puja is held to grace the ocsassion.

Ganesh Featival is celebrated throughout India, with an added zest in the state of Maharashtra. The preparations begin months in advance to welcome Lord Ganesha to our houses. Houses are cleaned and idols of Lord Ganesha are placed in every home. Exquisite arrangements are made for decoration, lightings, flowers and lamps.  The Lord is worshipped with immense devotion with daily prayer services to the god. Aarti is held with the offering of “Modak”, Lord Ganesha’s favorite sweet. As a blessing from the god, these modaks are cherished by children and adults alike.

Once the worship is completed, the statues are decorated and carried to be immersed into the water. This is called ‘visarjan’ which is the last stage of the Ganesh Festival each year. There are processions that are carried out throughout the land with drum beats, devotional songs and the use of firecrackers. Thousands of idols are immersed each year marking the end of the auspicious Festival. With chants of “Ganpati bappa morya, pudcha varshi laukar ya” the Lord is remembered in people’s hearts and conscious. With positive vibes and blessings from the spirit of the festival the Ganesh Festival is completed until next year.