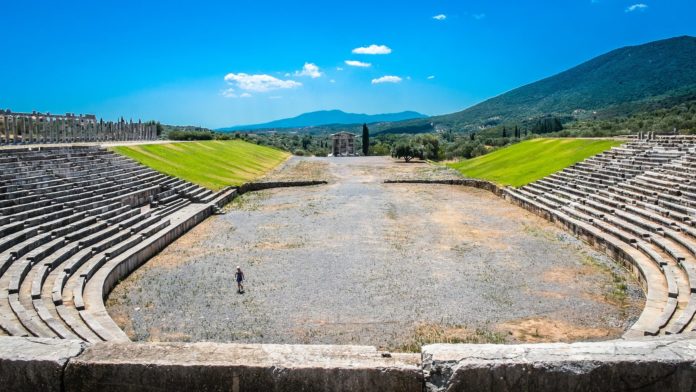 Mavromati (32 km. from Kalamata) is one of the many pictureques villages located in central Messinia. It is built like an amphitheatre up the foothills of the sacred mountain of Ithomi. Today it’s called Voulkano and is where the sanctuary of Zeus Ithomatos was located.

One of the legends upheld that Zeus was born not in Crete or on Olympus, but here at Ithomi, where he was brought up by two nymphs, Ithomi and Neda. Water flows from the heart of the mountain to splash out of a black hole in the rock face in the centre of the village. This is where Mavromati gets its name from. Mavromati means black eye.

– Aesklepieion complex: The Temple of Asklepios and Hygeia. It’s a peripteros, doric temple. It was destroyed by an unidentified reason and it was rebuilt of a local though stone.

– A small theatre-odeion belongs to the Asklepieion complex. An inscription was found which informs us that the building was found and called “Decterion”. It was a room for rhetorical displays and assemblies.

– Bouleuterion: A rectangular almost square room which also belongs to the Asklepieion complex. Its dimensions are: 19×18.30m. There are two entrances at the west side of the building.

– The wall which dates back to the 3rd century B.C. is one of the most important achievements of the ancient military architecture. Arcadic gate which is at the north side of the wall is still very impressive. It was the main gate of Messene and was the way to Arcadic Megalopolis which started from its external “door”. Temple of Artemis Limniatis or Lafria. It’s a small temple of the Ionic style. It’s dates back to the middle of the 3rd century B.C.

– Sanctuary of Zeus Ithomatas. The statue of Zeus, designed by the Argive Sculptor named Ageladas, was here. This type of statue, which represented Zeus as a child, isn’t known to us.

– Theatre-Stadium: There are only remains of the walls which supported the concave of the theatre. The lower seats of the stadium and especially those of the section of the sphendone have survived better than others.