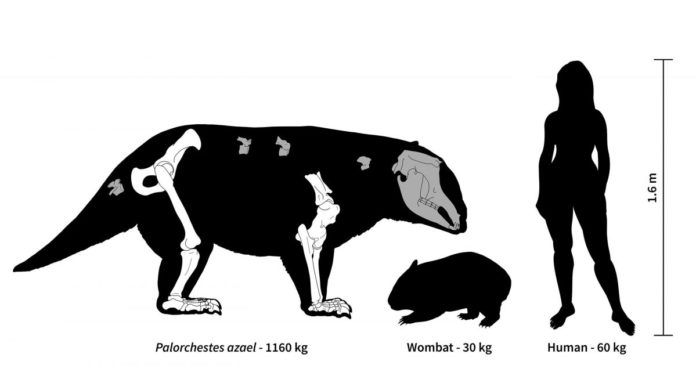 Over most of the last 25 million years, what is now Australia was dominated by a type of massive, strange marsupial that looked a bit like a modern-day tapir.

These marsupials, named palorchestids, weighed more than a ton and sported permanently-flexed, muscular arms with long claws at the end. They died out far sooner than most of ancient Australia’s other mega-fauna, their bones scattered across the continent.

According to a new study, published in the journal PLOS One, these odd forelimbs helped these creatures strip trees of their leaves and scrape branches for vegetation with their “scimitar-like claws.”

“We find them all over Australia but the population size was probably quite small. And they were quite sparsely arranged. It’s not like these guys were travelling in herds or in large numbers,” lead author of the new study, Hazel Richards, told the Guardian.

Richards and his team examined more than 60 fossil specimens to piece together how palorchestids used their arms millions of years ago. Unlike any mammal alive today, these extinct marsupial giants seem to have immobile elbow joints that were fixed at about a 100-degree angle, so that the arms served as permanently flexed food-gathering tools.

These bent forelimbs were “unlike any of their marsupial kin, living or extinct,” the study authors wrote.

The unique means with which these marsupials gathered food indicates they likely filled a niche no longer occupied in modern Australian ecosystems.

The researchers used the size of the forearm bones they analyzed to estimate how big these creatures were. Some of the herbivorous palorchestids weighed more than 2,200 pounds – much heavier than researchers previously thought.

“We came up with a number that was substantially larger than what has been estimated before and puts them some way up there among some of the the largest marsupials that we ever had in Australia,” Richards said.

But these marsupials weren’t the only giants that once roamed the wilds of of ancient Australia.

More than 40,000 years ago, giant kangaroos roamed western Australia. One type of ancient, short-faced kangaroo weighed 260 pounds (118 kilograms) and had powerful jaws like those of modern-day pandas that enabled it to bite through tough vegetation, according to another recent study in the journal PLOS One.

According to the study, the extinct kangaroo’s physiology suggests that it had adapted to take advantage of foods that were difficult to chew more than any Australian herbivore alive today. Modern-day kangaroos, by contrast, prefer grasses, flowers, ferns, and moss.

A 2018 study described what might have been one of the palorchestids or ancient kangaroos’ predator in the Outback. Thyalacoleo carnifex, a type of marsupial lion, weight more than 220 pounds, had a stiff tail for balancing and powerful forelimbs for climbing.

This marsupial lion was adept at climbing trees and cavern walls, where it likely waited to ambush prey, or scavenge meat, the study authors wrote – much like modern-day Tasmanian devils.