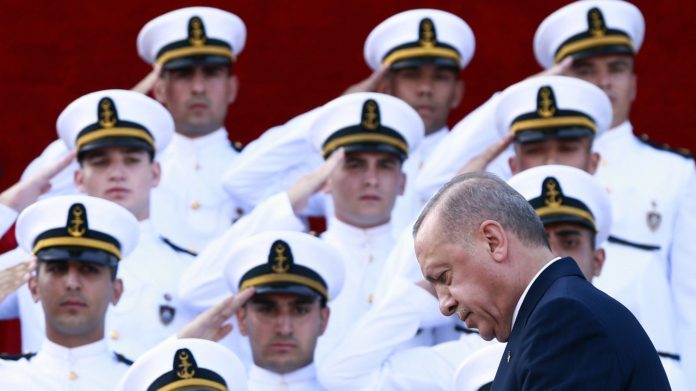 Turkish leader says fact his country is barred from having atomic bombs is unacceptable, says Israel is untouchable due to nuclear deterrent

Turkish President Tayyip Erdogan said Wednesday that it was unacceptable that Turkey was barred from having nuclear weapons while other nations in the region had them.

“Some countries have missiles with nuclear warheads, not one or two. But (they tell us) we can’t have them. This, I cannot accept,” the Reuters news agency quoted him as telling his ruling AK Party members in the eastern city of Sivas.

Under international treaties only the US, Russia, the UK, France and China could have nuclear weapons. India, Pakistan and North Korea later developed them too. South Africa had several atomic bombs but dismantled them when it became a democracy.

Israel is also believed to have nuclear weapons, a fact alluded to by Erdogan.

“We have Israel nearby, as almost neighbors. They scare (other nations) by possessing these. No one can touch them.”

In this Tuesday, May 9, 2017 file photo, Russian Topol M intercontinental ballistic missile launcher rolls along Red Square during the Victory Day military parade to celebrate 72 years since the end of WWII and the defeat of Nazi Germany, in Moscow, Russia. (AP Photo/Alexander Zemlianichenko, File)

While foreign sources have estimated Israel has an arsenal of dozens to hundreds of nuclear weapons, the Jewish state has neither publicly confirmed nor denied such reports in keeping with its policy of so-called nuclear ambiguity.

Erdogan stopped short of saying that Turkey would begin developing weapons, but seemed to rail against the terms of the Nuclear Nonproliferation Treaty, which Turkey signed in 1980. Turkey has also signed the 1996 Comprehensive Nuclear-Test-Ban Treaty, which bans all nuclear detonations for any purpose.

Another of Turkey’s neighbors, Iran, is believed to also be trying to acquire an atomic arsenal.

Iranian President Hassan Rouhani on Wednesday reiterated a threat that Tehran would take additional steps away from the 2015 nuclear accord on Friday and accelerate nuclear activities if Europe fails to provide a solution to oil sanctions, calling it Iran’s third and “most important step” away from the deal.

Later on Wednesday, Rouhani elaborated, saying in comments aired on state TV that starting on Friday, Iran’s atomic agency would work on the research and development of “all kinds” of centrifuge machines that can more quickly enrich uranium. However, he said the activities will be “peaceful” and under surveillance of the UN nuclear watchdog.

Under the nuclear deal, Iran has been limited to operating 5,060 older-model IR-1 centrifuges. A centrifuge is a device that enriches uranium by rapidly spinning uranium hexafluoride gas.

The country is allowed to test no more than 30 of the stronger, IR-6 centrifuges once the deal has been in place for 8 1/2 years. The deal is murky about limits before that point, which will arrive in 2023.

US sanctions imposed after President Donald Trump withdrew America from the deal have curbed Iran’s oil exports and sent its economy into freefall while what was left of the deal steadily unraveled.