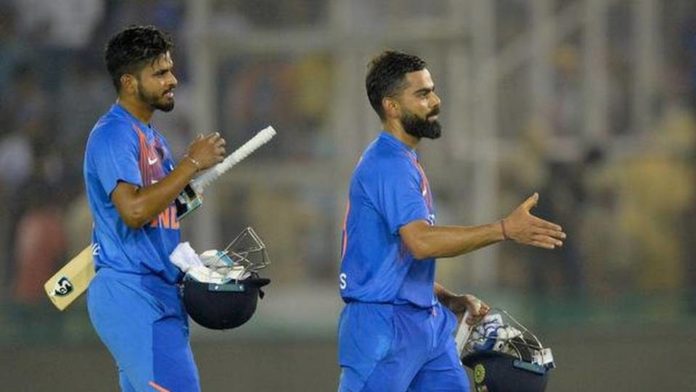 After a washout in Dharamsala, India got their home season underway with a comfortable win in Mohali, against a new-look South Africa side that didn’t quite show the depth of resources to genuinely challenge them. Having restricted the visitors to a below-par 149, India romped home with an over to spare, courtesy breezy knocks from Shikhar Dhawan and Virat Kohli.

By the end, Kohli put on an exhibition of crisp timing for the crowd; he stepped out to drive Andile Phehlukwayo between extra-cover and a desperately diving long-off to bring up his fifty, whipped Kagiso Rabada off his legs for an effortless six, and then jumped out to the left-arm spin of Bjorn Fortuin to chip him over long-on and bring the equation down to four runs off eight balls. Shreyas Iyer sealed the deal two balls later, drilling Fortuin for a straight four to give India a seven-wicket win.

India were never in any trouble with the required rate, with Rohit Sharma giving them early impetus with a brace of pulled sixes off Anrich Nortje in the second over of the chase. Dhawan was in excellent touch too, as he demonstrated with back-to-back boundaries off Kagiso Rabada in the next over, a drive through the covers followed by a late chop backward of point.

Andile Phehlukwayo gave South Africa some respite by trapping Rohit lbw in the fourth over, but that respite was brief, as Kohli walked in and gave immediate notice of his timing, with two fours – a clip off his toes and an on-the-up cover drive – in his first six balls. At that point, India’s required rate was only a tick above seven an over, and Kohli and Dhawan could stay in touch with it by simply taking the ones and twos on offer and waiting for the bad ball.

The pitch had been a little two-paced through the first innings, and India’s seamers had profited from bowling cutters and slower balls into the surface. Now, there didn’t seem to be as much grip, perhaps because of dew – Kohli had decided to bowl first for this very reason.

India’s relentless march to their target only suffered two further blips; a brilliant, one-handed grab from David Miller, running to his right at long-on, sent Dhawan back for 40, and then Rishabh Pant – sent in at No. 4, above Iyer – fell early, failing to get the desired elevation while he looked to scoop Fortuin over short fine leg. It was another moment in the life of a young, gifted shotmaker who often gets dismissed in the grey zone between playing the game that makes him who he is and playing recklessly.

Sent in to bat, South Africa never really gained the sort of momentum they needed to post a total in the region of 180. Quinton de Kock peppered the off-side boundary to begin, but during the time he scored 52 off 37 at his end, his two batting partners made 35 off 31 balls at the other end.

Reeza Hendricks struggled against the swing of Deepak Chahar, and eventually fell to a miscued lofted shot off him. Temba Bavuma didn’t look in any trouble against anyone in particular, but he definitely looked like a T20I debutant with 36 Tests and two ODIs behind him.

He took full toll when the bad ball came – as when Hardik Pandya sent down two successive short, wide slower ones – but he didn’t quite seem to have the muscle or inventive strokeplay to manufacture boundaries. And just when South Africa were looking to accelerate, Bavuma suffered a slowdown, with Navdeep Saini denying him the width he craved and conceding just two runs off the bat in five balls. At the start of the next over – the 18th – he went after a slower one from Chahar and holed out, for 49 off 43 balls.

South Africa were 126 for 3 at that point. They only managed three runs off the rest of the 18th over, and only four off the 19th, bowled by Hardik Pandya, losing an out-of-sorts David Miller along the way. Phehlukwayo and Dwaine Pretorius swatted Saini for a six each in the final over to give South Africa a reasonable finish, but it couldn’t make up for all the ground they had already lost.