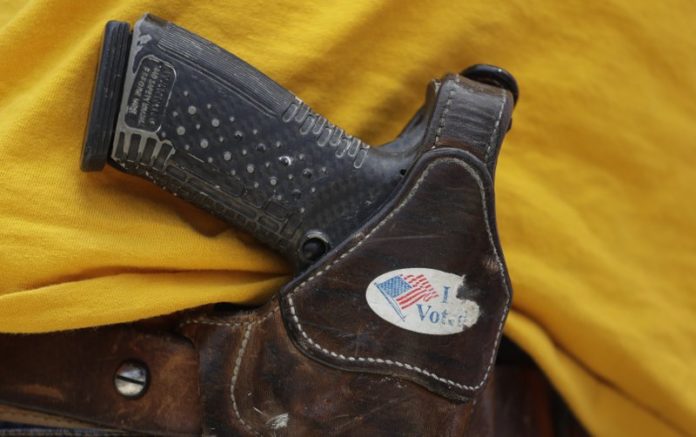 Big companies have been dipping their toes into America’s gun debate for a few years. Now, some are diving in.

The CEOS of 145 companies — including Airbnb, Uber, DoorDash, Gap and Twitter — sent a letter to the U.S. Senate Thursday seeking expanded background checks and “red flag” laws, which let courts remove guns from people who might threaten themselves or others.

Also Thursday, Publix — Florida’s largest grocery chain — asked customers not to openly carry firearms in its stores. That followed similar moves by Kroger, CVS and Walgreens. Earlier this month, Walmart discontinued sales of some ammunition and also asked customers to refrain from carrying firearms in its stores. The company was shaken after a gunman killed 22 people in an El Paso, Texas, Walmart last month.

Signing a letter with other CEOs isn’t exactly a bold move, marketing experts say. Polls have shown the majority of Americans favor more restrictions on guns; those who don’t aren’t likely to quit using Twitter or Uber because their CEOs signed a letter.

“I don’t think there is anything risky about trying to stem gun violence,” said Paul Argenti, a Dartmouth College professor of corporate communication. “The majority of people in this country agree with this.”

But it’s unclear how much impact the letter will have. Many heavyweights — like Amazon, Google, Facebook, Starbucks, Tesla and General Motors — didn’t sign. Those companies didn’t respond Thursday to messages asking about the letter. And the House, Senate and President Donald Trump have yet to come to an agreement on the various gun policies they’re debating.

“Companies feel trapped,” said Allen Adamson, co-founder of marketing firm Metaforce. “Because the country is so polarized on this issue, if they take a stronger stand than the letter, they will alienate customers and employees.”

The letter was organized by Levi Strauss and Co. CEO Chip Bergh and Everytown for Gun Safety, an advocacy group. Bergh, a former U.S. Army officer, has been an outspoken gun control advocate. Levi Strauss has been asking people not to bring guns into its stores since 2016, when a customer shot and injured himself accidentally while trying on some jeans.

“Doing nothing about America’s gun violence crisis is simply unacceptable and it is time to stand with the American public on gun safety,” the letter says. “Gun violence in America is not inevitable; it’s preventable. There are steps Congress can, and must take to prevent and reduce gun violence.”

Pace University marketing professor Larry Chiagouris said the letter was a “no cost, low risk, low impact PR move” that’s not likely to make an impact on the gun debate since the companies didn’t specify any consequences if the laws don’t change.

“Does it get them good vibes with the anti-gun world? Yes. Does it give them bad vibes to people who belong to the NRA? No,” he said. “Gun supporters will be oblivious.”

Companies often wade into social issues if they believe the stance will engender themselves to consumers.

It’s not always smooth sailing. Nike caused an uproar in 2018 with an ad that featured Colin Kaepernick, the former 49ers quarterback who was the first athlete to kneel during “The Star-Spangled Banner” to protest police brutality against blacks and hasn’t played a game since 2016. Starbucks was mocked in 2015 for trying to start a discussion about race by writing the slogan “Race Together” on its cups.

But sometimes, the gamble works. Dick’s Sporting Goods banned assault-style weapons from its stores after the Parkland, Florida, shooting in 2018. This year, it removed guns and ammunition from 125 of its 720 stores. Last month, Dick’s raised its full-year earnings forecast because of better-than-expected sales. Dick’s CEO Edward Stack was among the CEOs who signed the letter.

Richard Fain, the chairman and CEO of Royal Caribbean Cruises, sent employees an impassioned letter calling for “sensible change to gun laws” after last month’s mass shootings in El Paso and Dayton, Ohio. In the letter, he said Royal Caribbean would donate $250,000 to March for our Lives, a group founded by Parkland survivors, and would match employee donations to the group.

Fain says he got only one negative response. So when Bergh contacted him about the CEO letter, he immediately said he’d sign.

Fain is a gun owner and likes target shooting. He also understands detractors who say a cruise company shouldn’t get involved in policy debates. But at the same time, he has many employees living in and around Parkland, and he thinks companies need to stand up and support commonsense gun laws.

“This isn’t controversial,” he said.