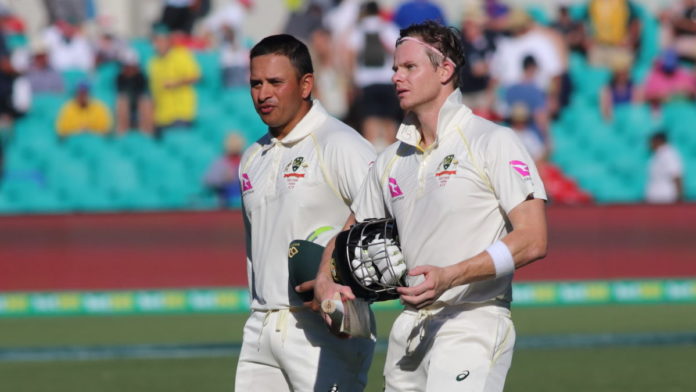 Manchester, Sep 5 (AFP) Australia star Steve Smith marked his return to international cricket with a third hundred of this Ashes series on Thursday.

Smith was 101 not out in an Australia total of 245-5 at lunch on the second day of the fourth Test against England at Old Trafford.

Tim Paine, his successor as Australia captain, was unbeaten on nine after winning the toss.

But it might have been a different story had fast bowler Jofra Archer held on to a Smith caught and bowled chance.

Archer, whose bouncer at Lord’s concussed Smith and ruled him out of England’s dramatic one-wicket and series-levelling win in the third Test at Headingley, dropped the chance when the world’s number one-ranked Test batsman was on 65.

This was Smith’s third hundred of a series where he made 144 and 142 in Australia’s 251-run win in the opener at Edgbaston — his first Test since completing a 12-month ball-tampering ban.

His lowest score of the current campaign was the 92 he posted at Lord’s after being felled by Archer.

Australia resumed on 170-3 after Wednesday’s rain-marred first day in Manchester.

Smith was 60 not out — his eighth successive Test 50 against England extending the 30-year-old’s Ashes record.

Australia had been in trouble at 28-2 but Smith and Marnus Labuschagne, whose 67 was his fourth successive Test 50 since replacing Smith as a concussion substitute, put on 116 for the third wicket.

Play resumed Thursday in better conditions for cricket — the sun was out while the considerably reduced crosswind made life easier for England’s fast bowlers.

Thursday’s second over saw Smith drive Archer’s second ball off the back foot through extra cover for a superb four to go to 65.

The very next delivery, however, Smith hammered a full toss straight back at the bowler only for Archer to drop the chance despite getting both hands to a ball that went for a straight four after bursting through his grasp.

But Stuart Broad, whose double strike on Wednesday accounted for Australia openers David Warner and Marcus Harris, removed yet another left-hander this series when he had southpaw Travis Head lbw for 19.

Following a brief stoppage for rain Smith was on 82 when he survived a possible run-out chance. He went for a single off Jack Leach only to be sent back by non-striker Matthew Wade and he might have been out had a throw from quick-moving wicketkeeper Jonny Bairstow hit the stumps.

Next ball, Smith whipped left-arm spinner Leach off his pads for a four.

But Leach, who had played a key supporting role at No 11 while Ben Stokes’s superb 135 not out saw England to victory at Headingley, then lured Wade (16) into a miscued drive to England captain Joe Root at mid-on, with Australia now 224-5.

Smith then clipped Craig Overton for a two through square leg that saw him to his 26th Test century in 160 balls, with 11 fours.