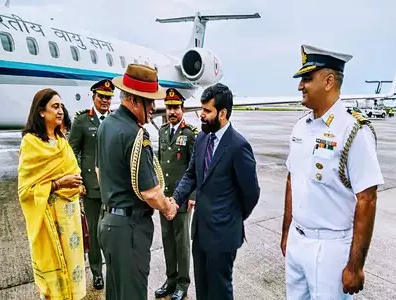 “The visit is aimed at strengthening close bilateral defence ties between the two nations. The Chief of Army Staff is scheduled to meet the national and armed forces leaders on wide-ranging issues,” the Indian Army said in a tweet.

The Maldives, due to its centrality to the Indian Ocean region, has always held strategic importance for India.

India has been extending support to Maldivian defence forces in helping them enhance their capacity and capability. Sources said certain military equipment would be handed over to the Maldives during Gen Rawat’s visit.

In Maldivian capital city of Male, Gen Rawat will also deliver a lecture on India’s security perspective for the region.

It will be Gen Rawat’s first foreign visit after taking charge as Chairman of Chiefs of Staff Committee (COSC) from outgoing IAF Chief Air Chief Marshal B S Dhanoa on Friday.

Defence and security ties between the two countries were back on track after Solih became president of Maldives in November last year, after defeating Abdulla Yameen in presidential elections.

Yameen was perceived to be close to China as Beijing expanded its influence over the Maldives during his presidency.

The relations between India and the Maldives deteriorated after the Yameen imposed emergency in the country on February 5 last year.

India had criticised his decision and asked his government to restore the credibility of the electoral and political process by releasing political prisoners. The emergency had lasted for 45 days.

Prime Minister Narendra Modi visited the Maldives in November last year to attend Solih’s swearing-in ceremony. Modi paid a bilateral visit to the Maldives in June, which was his first foreign visit after re-election as prime minister.

The visit reflected the importance India attaches to the Maldives.

During the visit, Modi inaugurated a coastal surveillance radar system and a composite training centre for the Maldivian defence forces.

The strategically-located Indian Ocean island nation is an important neighbour for India and both countries were enhancing defence and security cooperation, particularly in the maritime sphere.