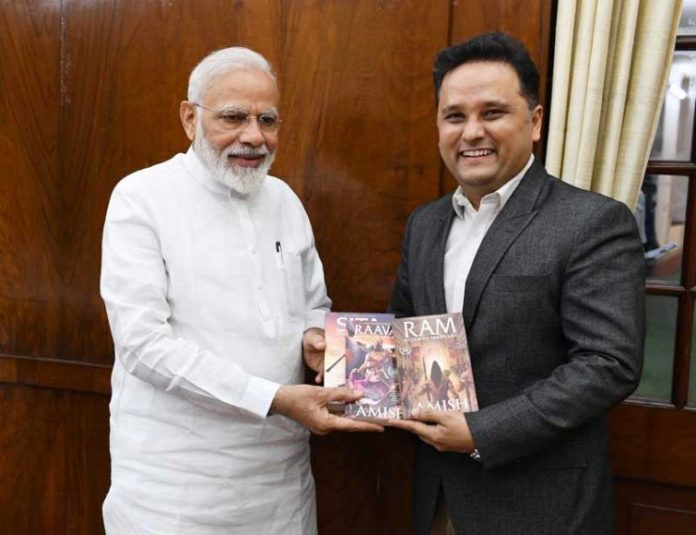 Nine years after he stormed into the literary world selling three million copies of “The Immortals of Meluha”, the debut novel in his Shiva trilogy, author Amish Tripathi’s mythological fiction juggernaut has been on a roll – “The Secret of the Nagas”, “The Oath of the Vayuputras”, “Ram: Scion of Ikshvaku”, “Sita: Warrior of Mithila” and “Raavan: Enemy of Aryavarta” — with the exception of “Immortal India”, his only non-fiction book, which came out two year ago.

Having single-handedly secured six out of 10 spots in a national bestseller list, Tripathi believes mythology explores all flavours of human life. “A love story is exploring just one aspect of the human condition and emotion. Whereas an epic of mythology explores almost all aspects of the human condition: heroism, grief, disgust, all the navrasas, one of which is love. That’s a bit like saying mythology is like a ‘thaali’, which has all the dishes, whereas a love story would probably be the ‘daal’ in it,” the author told IANSlife.

A former banker, Tripathi’s switch to writing was no fluke. In 2010, Amish self-published his debut novel, which was a raging success. “If no one else is backing you, then you should back yourself. It may not be your ideal choice, but it’s better than letting your voice be shut down. I see it as freedom of expression,” Amish said.

And Amish arrived at the calculated decision to quit his decade-long career in banking and write full-time after the royalty cheque for his second book became more than his salary.

He has since been translated and published into 19 Indian and international languages and is a recipient of the Crossword Book Award. Tripathi was recently announced the director of the Nehru Centre, the cultural wing of the Indian High Commission in London, and he plans to move to the UK next month.

Though a publisher’s backing is always good, Tripathi feels quality should be measured over time and not by individuals. “You never know when a fine author would emerge from self-publishing,” he pointed out.

He also feels that brick-and-mortar bookstores and libraries – through which an average author becomes a bestselling one – are fast disappearing.

“There is nothing that can replace physical bookstores — which aid browsing — which is the only way new authors get discovered. This is a real challenge, and it’s happening across the world. It’s not easy to browse online, so people at the top-end, the bestsellers on the home page, or people at the longtail, they profit from online bookstores,” said the author.

“Just as a strong middle-class is a must for a healthy economy, similarly a strong average market and the average bestseller are the lifeblood of an industry. Without physical bookstores aiding the cause of browsing, this is going to get hit,” the author iterated.

Tripathi has just finished Deep Halder’s “Blood Island” and is onto Vikram Sampath’s “Savarkar: Echoes from a Forgotten Past”. His parting advice: “You want to be a good writer? Be a good reader, first.”