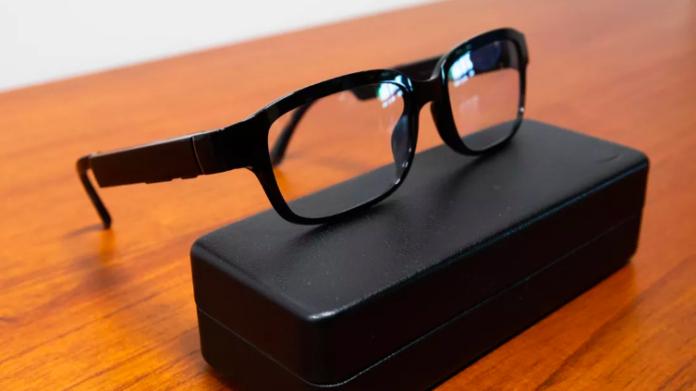 Amazon is entering the smart glasses field with the Echo Frames, the company announced at its Alexa event on Wednesday.

Dave Limp, senior vice president of devices and services, referred to Echo Frames as one of Amazon’s “Day One Editions,” part of a program for experimental products that aren’t yet generally available but are on the horizon. The smart glasses don’t have a display or camera on them, only integrated microphones and a small speaker for Alexa access on the go.

The glasses look like any normal glasses, but discreetly direct Alexa’s responses to your queries directly into your ear. You can also swipe the side of the glasses to get more information, set reminders and use smart home gear while on the go.

The Echo Frames will be available with or without a prescription, and weigh only 31 grams (1.1 ounces), Limp said during the event.

Limp didn’t mention any augmented-reality capabilities, but that simplicity might make them a more practical everyday product than, say, Google Glass — more of a way to use Alexa on the go and keep your hands free than a revolutionary way of experiencing the world around you.

The glasses are now available by invitation only, for $180. They’re US-only for now.

This isn’t Amazon’s first foray into the world of smart glasses: At CES 2018, the company announced the Vuzix Blade AR smart glasses with Alexa integration. Those $999 glasses are aimed at a business audience, however, where smart glasses have found more widespread adoption. Google Glass famously attempted to offer a set of consumer smart glasses in 2013, but the company pivoted Glass to business uses in 2017.

However, the Echo Frames likely won’t be the only ones on the market aimed at the more general population: Last year, Bose released smart glasses with an audio component, that similarly speak aloud to your using speakers built into their arms. Code found in Apple’s newly released iOS 13 mobile software suggests support for AR glasses or a headset, though no official announcement has been made. Facebook also has the pieces in place to eventually release an AR headset or smart glasses, though doesn’t seem to be in a rush to do so.

Amazon could be one of the first companies to bring this technology to market for consumers, which would give it a prime mover advantage. However, it will have to address a number of privacy concerns raised by the potential of even more Alexa integration into people’s daily lives.

Shipments of AR glasses are projected to surpass 150,000 in 2019, and to hit 2.7 million devices in 2023, according to an August report from CCS Insight. These glasses will start gaining traction among consumers within the next few years, the firm predicts, particularly as tech giants begin producing them.