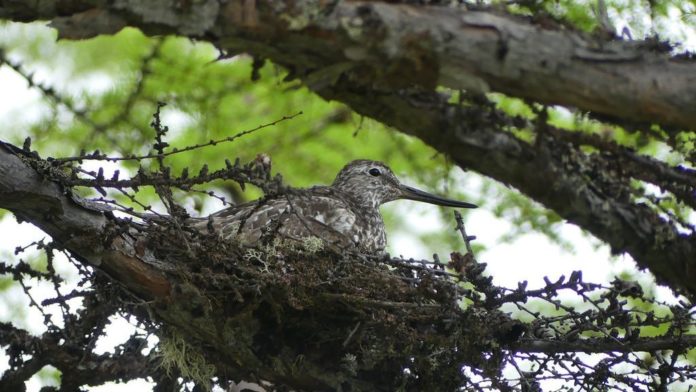 It is the first time in more than four decades that researchers have had an opportunity to study the endangered shorebirds, a Greenshank.

One of the few things known about the Nordmann’s greenshank is that it is one of the most endangered shorebirds on earth. No one had studied the bird in depth since 1976, and its nesting habitat remained a mystery.

But this summer, an American graduate student and Russian ornithologists spotted a pair of Nordmann’s greenshanks in a larch forest near a coastal bog in far eastern Russia. They shot video of one in a nest, measured and photographed four eggs and tagged seven adult birds, a few which have been spotted again as they migrated south across Asia.

“The moment of discovery — it was pure joy,” said Philipp Maleko, a graduate student at the University of Florida, who tracked the birds for nearly two months this summer, wading through the bog and forest to spot the nest. In addition to fighting off hordes of mosquitoes, the research team traveled with an armed guard to ward off bears and wolves.

Their research marked the first in-depth investigation in decades of the Nordmann’s greenshank (Tringa guttifer), a pigeon-size bird named for a 19th-century Finnish biologist and parasitologist.

The population of Nordmann’s greenshanks has been crashing in recent decades, as a result of hunting and wetland reclamation in coastal Asia. No more than 2,000 of the birds, also called the spotted greenshank, are believed to be left in the wild, said Jonathan Slaght, the Russia and Northeast Asia coordinator for the Wildlife Conservation Society, which helped lead the research effort.

The most endangered migratory shorebird is the spoon-billed sandpiper, Dr. Slaght said. In Southeast Asia, where both species spend their winters, hunters often kill the birds to sell for food. Local conservation groups have been paying a few hundred dollars each to the hunters so they can afford fishing nets and stop killing shorebirds. “They don’t want to be hunting birds, it’s just all they can do,” Dr. Slaght said.

This summer’s expedition captured the first video footage of Nordmann’s greenshanks and the first photos of an adult sitting on a nest. “I shared these images with some people in Southeast Asia and they couldn’t articulate their emotions,” Dr. Slaght said.

“It’s one of these mythical things,” he said, “that you know probably exists but no one’s ever seen.”

The Wildlife Conservation Society and the East Asian-Australasian Flyway Partnership sponsored the majority of this summer’s research.

Mr. Maleko, also a research assistant at the Florida Cooperative Fish and Wildlife Research Unit, said he hopes the investigation serves as a pilot project for research aimed at supporting the species’ survival. There remains a lot to learn, including the bird’s migratory paths, its food sources and the threats it faces during migration, breeding and overwintering.

The team placed colored identification tags on the seven adults and eight chicks they caught — for about 20 minutes each — and three of the adults were later seen in early August in the mud flats of Shanghai, roughly 1,800 miles to the south. The birds are expected to travel another 1,800 miles to Thailand and Malaysia for the winter, and return to Russia next spring.

Mr. Maleko arrived in far southeastern Russia in mid-May and spent several weeks with two Russian colleagues tracking the birds along Shchastya Bay, a coastal lagoon in the southwestern corner of the Sea of Okhotsk. Around noon on June 17, Mr. Maleko, along with Konstantin Maslovksii, a Russian ornithologist, and their bear guard, Alexei Kalchenko, noticed a bird resting on a sandbar and found a nest nearby. The birds returned to the nest as soon as the men finished investigating and moved away.

Mr. Maleko said the greenshanks are “elegant and majestic birds,” catching fish with their giant bills and carefully guarding their chicks. “If I was a bird, I’d like to be a Nordmann’s greenshank for sure,” he said.

A native of Russia who grew up in California, Mr. Maleko said he had long wanted to conduct research in this region. He was also drawn to the Nordmann’s greenshank. “These imperiled birds called out to me,” he said.

“I don’t know what else I’d rather be doing,” he said, “than working with these birds and trying to save them in this dangerous time of ours.”